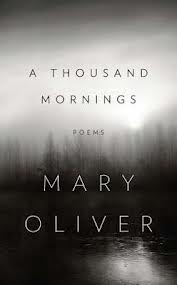 Pulitzer Prize-winner Mary Oliver’s latest book, A Thousand Mornings, is yet another collection of meditative poems in praise of nature’s beauty, spiritual generosity, and connectedness. This collection veers away from the Christian vocabulary so profuse in her previous two collections (there are many others), and instead offers a more diverse range of entry points–whirling dervishes, Shiva, “and God, by whatever name.” Like her previous collections, Oliver stays true to her practice of walking and mindful attention. She acknowledges the repetition of these themes in the opening pages with a quote from Jung: “The life that I could still live, I should live, and the thoughts that I could still think, I should think.” And why not? Reading Oliver’s poems is a practice in itself, one that leaves me feeling unhurried and open to the wisdom of fleeting moments. Mostly.

First the good stuff. What strikes me most about Oliver is her characterisation of animals. They are not used as devices, mirrors to reflect human projections of thoughts and feelings, nor are their characterisations applied generally to each species. The animals of Oliver’s world are individuals. This is made plain in “Good-bye Fox,” when the speaker (who I will forever after refer to as Oliver) encounters a fox lying under a shady tree, and has an unspoken conversation with the animal, which she suggests through the absence of quotations and italics, punctuation she does not typically avoid: “Well, I’ve heard of your conversation about us. News/ travels even among foxes. . . ” The news the fox refers to is about a conversation between Oliver and another woman. Said the fox: “Some lady said to you, ‘The hunt is good for the fox.’/ And you said, ‘Which fox?’” So not only does this fox offer particular insights to Oliver, but he acknowledges her own insight in perceiving each fox as an individual. But Oliver never likes to keep to abstractions, so this truth is dramatized when the fox stands, “slowly, for he was old now, and/ambled away.” Until this point, we have not been given any description of the fox beyond the fact that he is lying under a tree. The revelation that he is old, with a particular way of walking came as a surprise to me. I had simply pictured a fox, an able-bodied, quick-footed creature and had not even wondered about this fox beyond that. See? I forgot to ask, “which fox?”

There are many other poems in this collection that give voices to animals. And I do not read these as intended projections of Oliver’s own thoughts or feelings because Oliver’s presence is not abstract—her own place within the scene is acknowledged. Not only do the animals affect her, but she affects them, too, and in unique ways. In “The Instant,” a snake lay in the grass, but then it “swirled to look, didn’t/like what it saw/and was gone in two pulses. . .” Even the trees see her as she tries to count their branches: “from their point of view,/it’s reasonable that my friends say: what foolishness! She’s got her head in the clouds/again.” Oliver does not suggest that her presence is always interesting, though. And if she does appear to go unnoticed, she does not conclude it is because she is unseen. For example, in “Hum, Hum” a swarm of bees flies past her, “not at all interested in me but on its own/way somewhere, all anointed with excitement.” It is not that the bees are too unaware to take note of a large primate, but simply that they are focused on some other destination.

But, of course, Oliver is still projecting her own insights, insecurities and beliefs. We all do this, even in our interactions with other humans, so how can we avoid this with animals? And this is at the core of what bugs me about Oliver. All this mindful looking feels suspiciously “pure.” And this brings me to the other stuff . . .

Her world is one where birds sing to praise God, foxes reflect on the nature of being, mockingbirds seek quiet refuge to sing their true selves to the sky, all of which may certainly be true—why not? But this world, though gendered, is almost completely void of sexuality. I’m not suggesting the birds should be courting potential mates, or the fox just cooling his testicles before a hopeful romp. No. The persistent characterisation of animals as singularly focused on procreation pisses me off. But Oliver, instead of countering these simplistic ideas, only presents another simplistic vision of wild animals, where they are instead singularly focused on the nature of being. They are never pissed off at each other, they don’t have pet peeves, they are never rude, they don’t fight—except where her own dog Percy is concerned, an animal she knew very closely. Aside from that, she presents a creationist’s dream, where sexuality is conveniently invisible.

Let me explain my frustration. One summer, I gave interpretive nature tours for Yukon Conservation Society. I educated myself on Yukon flora and fauna by attending other interpretive tours. When it comes to heteronormativity, birders are the worst. On one tour, a female sparrow didn’t simply hop away from a male; “She plays coy,” said the guide, “the guys know what I’m talkin’ about.” Chuckles from the men. Other comments I choose to forget. Males sing only to assert their macho territorial rights or to attract a girlfriend. Beauty is competition. Song is intimidation. Wild mammals would trample each other for the chance at penis to vagina intercourse.

I hated those tours. But when I delivered my own interpretation for visitors, it was hard to offer a more complex Nature. I could have pointed out that although Dall sheep typically live in same sex groups, scientists have observed a male living with females, and behaving as a female. Yes, basically a transgender Dall sheep. And there are many other similar examples (check out Biological Exuberance by Bruce Bagemihl for more). Does this sound unusual? Does this sound out there? Does it sound like something you would here on a free interpretive nature walk on your way into Whitehorse? Why not? I’m programmed to consider this information esoteric, more suited to a colourful footnote. I long for writers that offer a more complex, nuanced, rich, exuberant vision of Nature.

Though beautifully meditative, and complex in her conversation with American literary heritage, Mary Oliver is not one of those writers.

Oliver almost completely avoids any sexuality at all in her poetry, let alone homosexual affection between females. Of the 41 animals in this collection, eleven are male, and one is female (the rest are in gender neutral plural forms, or referred to as “it”). The only time an animal displays any kind of sexuality at all is when her male dog Percy is imagined kissing a female dog—and that is the one female animal to appear.

When it comes to non-animal nature, figures are always gender-neutral, except for two examples, where they are a “sister tree” or a “little sister pond” (note the immovably platonic nature of the relationships). And what about humans, you might ask? Of the fifteen references to humans, ten are male (half of which are named), one is a gender neutral reference to “children,” and four are female: the lady who said that thing about the fox hunt, mother, Anne (here’s what it says about Anne: “For [Percy] loved Anne” Who the heck is Anne?), and a woman pouring water on herself in the Ganges. Then, with one massive stroke, she genders it all masculine: “Every day I’m still looking for God/and still finding him everywhere.”

“Stop! Stop!” you say, “you’re ruining it!” I know. But why couldn’t Oliver have used “she” for a couple of those animals? It’s not as if she would have known for certain they were male. For example, she genders an ant male when almost every ant you encounter is female (male ants are usually only found in home colony).

But maybe there is a simple answer. Perhaps Oliver is simply using the male pronoun as a default pronoun, and thus neutral. Is it possible that a poet and lesbian woman could regard patriarchal language as something so incidental? And if this is the case, why are animals sometimes gendered and sometimes not?

I wondered if this masculinization of nature is an attempt to distance herself from the much-criticised woman-equals-nature equation. I read some feminist criticism of her work from the early Nineties, which complained that Oliver conflated female and nature in a “dangerous” way. I admit I have not read much of her earlier work, so I have to wonder if this masculinity is a more recent direction—a new compensation for her own femaleness. Oh, wouldn’t that be ironic! Regardless of the reasoning, A Thousand Mornings conveys a particular world vision as a result.

So what is Oliver’s projection? Through her avoidance of femaleness and sexuality, she exposes her own discomfort with those aspects. And now I’m projecting, because I have noticed in my own writing that the gayest thing about it is the typical absence of any sexuality at all. But there is one very telling poem about desire in Oliver’s collection.

In “An Old Story,” Oliver wakes in the middle of the night “to the first fragrances of spring”:

My heart says, what you thought you have you do not have.
My body says, will this pounding ever stop?

My heart says: there, there, be a good student.
My body says: let me up and out, I want to fondle
those soft white flowers, open in the night.

Fondling soft white flowers is a pretty obvious metaphor for sexual touching of a female body (obvious, cliché, etc.). So the female sexuality that occurs in this collection is veiled in tired metaphor, and if it is not intended as metaphor, then it is the literal sexual touching of flowers outside at nighttime. Okay. But then I have to ask her, “are you sure it’s the flowers you’re after?” The metaphor is inescapable. And what else does this poem reveal about Oliver’s relationship with desire? The lines alternate between “my heart,” and “my body,” each one with its own voice. The heart teaches and soothes, while the body asks questions about its physical experience, and asks to be let out. Not only does this divorce the heart from the body (soul vs. physical self?), but it also characterises the body’s physical desires as childish, and the heart as the wiser, knowing figure, urging the body to “there, there, be a good student.” The presence of “there, there” suggests at attempt to calm the body. But why can’t the heart say, “Yes! Embrace the white flowers”? And why is this an “old story”? Is this meant to suggest a tradition? Or is this yet another distancing tactic, designed to relegate this story of possible homosexual sensuality to the past?

I have no use for such heavily veiled expressions of desire, physicality, sexuality. Oliver’s poems—the people, the animals, and the trees they contain—are celibate monks and I don’t trust them.

But, if I can put all that aside, ignore those notes that sound in desperate need of tuning, I can appreciate some of them. Not all of them. In Red Bird, her description of a crow eating another crow was so far off from my own experience and knowledge of crows that I wondered if she really knows anything about any of the animals she writes about. So what will I do with my 82-page poetry book (only 51 pages actually have poetry on them) which I paid $26.50 plus tax for? Give it to someone who wouldn’t be annoyed by these things. Which is a lot of people. After all, The New York Times has described her as “far and away, [America’s] best-selling poet.” I’ll let you draw your own conclusions on that one . . . [/expand]