Basin from davideo on Vimeo.

David Geiss doffs his tweed cap as we exchange introductory hellos and sit down in a comfy corner of Swan’s Pub in downtown Victoria, BC, to discuss his latest works over a beer. Geiss, born in Saskatchewan and a relatively recent transplant to Victoria, has spent his burgeoning career addressing subject matter that reflects contemporary Canadian cultural and environmental concerns, challenging viewers to contemplate often subversive material on an intimate but wholly enveloping scale.

We begin talking about his most recent documentary film, Basin, and the implications it had for his oeuvre, as well as for the Canadian landscape.

Geiss was introduced to Fort McMurray as the quintessential oil town through media coverage of the oil industry. Cars pass the casino lights that read Boomtown, a flashing reminder of the interrelationality between boom and bust, both contained in the fritz and flicker of neon. Geiss saw the possibility of a filmic interrogation in the expanding area. The film exhibits qualities of the North American road mythology–highway-side, flickering signs and traffic passing by, never slowing down.

As Geiss and his small crew, including DOP April Hall, traveled to Fort McMurray for the Basin shoot. “Every place we stopped and told people where we were going, they told us to watch out, it’s rough up there,” Geiss says.

On the second day of the shoot, their camera equipment was stolen. This is why you always get insurance, he explains. Despite claims to prosperity, the oil town has a reputation for drug culture and rampant crime. This is the other side of boom: desperation and ghettoization of those living in industrial areas for the sake of business “development.”

Using extant footage from Greenpeace, as well as footage with photographic direction from April Hall, Geiss was able to get an “on the ground” perspective while still maintaining the long view, literally. In this way, his film demonstrates his support of the Greenpeace organization, never shy about their commitment to activism that has always served the environment before any government. These aerial shots from Greenpeace bring up the vast extensions of the oil industry–expanses of grey that are unrecognizable as human landscapes. Besides reducing the environmental impact of his film by not chartering a helicopter for the overhead shots needed to show the scope of the oil industry, Geiss knew that the connection to Greenpeace showcased his desire to remind viewers of environmental dangers. 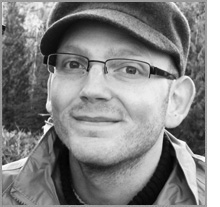 But it seems apocryphal to declare Basin a cautionary tale–the environmental damage is not only already in progress, but ongoing. His examination of existence and industrial development in a First Nations and Canadian culture-eroding oil wasteland is a resolution to protest, through film.

Geiss’ film portrays real effects of Boomtown culture, the destruction of Athabasca Chipewyan First Nations lands for the Jackpine pipeline being one of them. Geiss, while not a First Nations artist, chose to have a drummer, Nicholas Giant, performing in the film. This traditional art, performed in a barren landscape, juxtaposes the erosion of indigenous cultures with the environmental destruction caused by natural resource extraction from treaty land without consent or consultation—one of the most hotly debated issues in the country. Ongoing struggles in Canada over rights and protections of land are currently reaching fever pitch as the Idle No More movement gains popularity among sovereign First Nations, as well as their Canadian allies. Most notably, Chief Theresa Spence of Attawapiskat Nation is currently on a hunger strike until Prime Minister Harper meets with her. A meeting has been scheduled for January 11th, 2013.

But what does it mean to fight this industrial oil development in a national arts culture that relies so much upon federal grants and corporate sponsorship?

A recent article in Canadian Art discussed the opportunity of tar sands money flowing into Canadian museums, and how this this kind of financial benefit can aid the development and sustainability of Canadian art and museums (this could include all media across artistic disciplines):

Where there’s oil, there are museums. That’s one of the mottos of [Lord Cultural Resources] office. Where our energy comes from determines our values. Surplus energy makes our culture possible

The offices of Lord’s Cultural Resources, an international museum consultancy located in Toronto, have the work of internationally acclaimed Canadian artist Edward Burtynsky hung on the walls; Burtynsky is best known for somewhat bleak, larger-than-life representations of industrial oil fields, rock quarries and other scenarios of human environmental impact. At what expense does the oil industry support the arts, and more importantly, which “cultural institutions” do they support?

Geiss’ film interrogates the validity and costs of an oil town, a boomtown economy based on natural resource exploitation, and the strength of a national industry that denies First Nations self-determination in the use of their ancestral lands. In a time when the arts so desperately need the support of corporate profits, artists, like Geiss, willing to show their support for environmental movements, human rights and social justice campaigns, become activists for change.

Basin won a Hall of Fame award at the Magmart Video Under Volcano International Video Art Festival in Naples and will have its Canadian national broadcast premiere on APTN in 2012. It has also screened at such festivals as Hot Docs and Inside Out in Toronto, the International Environmental Film Festival in Paris, and Globians World & Culture Documentary Festival in Berlin.

Geiss’ cultural environment has always been in front of his lens. His first major documentary was Queen City, which came out in 2006 and garnered the Best Documentary Award at the Canadian National Youth Film Festival, and had its Canadian national broadcast premiere on OUTtv in 2011. This insightful look at the drag culture of queen city Regina shows the viewer how different cultures can accept or reject contemporary drag queen culture in the queen city of Canada. The Queen City writeup on Geiss’ website poses the question, “Why do grown men and women dress up in flashy costumes and lip sync songs to an audience night after night? For attention? Or is it merely a harmless hobby? Maybe there’s more to it than that. Take a ride through the Queen City and find out.”

Historically, the so-called “female impersonator” culture, as coined by Esther Newton in the early seventies with the groundbreaking study Mother Camp, has been subversive and controversial. Contemporaneously, the drag scene shows retain elements of, but are hardly the same as they used to be, and Geiss’ documentary seeks to show a queer and current account of the drag scene within Canada in the millennial era.

Geiss is an important, emergent filmmaker in the queer and larger national film art scene. His films are timely and contemporary, engaging in subject matter that does not shy away from political content.

His involvement and commitment to the development of a Canadian film and entertainment culture is ongoing as he teaches film courses in the Fine Arts department at the University of Victoria. He obtained a BFA in Film & Video Production on scholarship from the University of Regina, and has since been an independent filmmaker, artist, writer, and occasional performer. He has exhibited across Canada, the United States, and Europe, meanwhile navigating through the roles of Festival Coordinator at Queer City Cinema Biennial International Queer Arts Festival, recurring actor on the TV comedy series Corner Gas, and Editor of the Saskatchewan Filmpool Cooperative’s independent film magazine Splice.. His 2009 docudrama Stubblejumper appeared at several international festivals and is currently being broadcast on SCN and OUTtv. He is currently working on a short film entitled Bark to the Land.