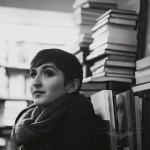 When I opened the email to learn that I had been selected to attend the 2012 Lambda Literary Retreat for Emerging LGBT writers, I may have shrieked. I grew up in a small town in the northeastern part of Saskatchewan. I’m a young woman and came out as a femme lesbian when I was younger still. No way was the only writing retreat in the world exclusively for LGBT writers going to accept me.

But they did. And I thank the Sapphic pantheon for it. I went to LA for eight days in August last year that were not only formative, but transformative. Here’s why.

I’m the only publically self-identified lesbian in my cohort of my MFA program in Creative Writing. While I work among amazing allies and a few other queers, Lambda was my first experience in a workshop only for LGBTQ folk. Tokenization based on my sexual orientation became impossible. At no point in the Lambda workshop did I receive the feedback all too common to queer writers: that my characters were “too specific,” that their genders were unidentifiable according to a binary sex-and-gender system, that the relationships between women were unclear. Lambda gave me the opportunity to move beyond educative bridgework and focus on style and craft with my peers.

And while I recognize the ghettoization of queer literature, Lambda gave me an opportunity to workshop my poems with, realistically, my audience. Queers. Queer writers. And most importantly, queer readers.

Lambda was like my dream book club, where I didn’t have to explain to any fellow poets who Michelle Tea or Alison Bechdel was. Published authors or first-time workshop attendant alike, we were all queer readers first. My Lambda fellows knew what it was to seek out stories, to dig for any representation of your desires. And I reveled in it.

As the lone Canadian at the retreat, I moved beyond my media-based preconceptions of who “Americans” are and discovered among many of my new friends a rich tradition of counterculture and resistance. My roommate, poet Abbie J. Leavens, was from Iowa and we bonded over the necessity of long drives and big horizons in our writing practice. Poet Megan Backer and I have since coordinated book launches in Vancouver and Rochester. I met Jacks McNamara, co-founder of the Icarus Project, whose work I had been reading about since our first radical bookstore opened in Saskatoon. I attended presentations by Amy Schulter of the Feminist Press, and Eloise Klein-Healey, who runs the only lesbian poetry press in North America and has since been named LA’s first poet laureate.

And then there was the faculty. After my reading in front of our entire Lambda crew (no pressure), Dorothy Allison, author of Bastard Out Of Carolina and The Women Who Hate Me, among others, told me I was lovely. I don’t think I’ve ever blushed so hard in my life. Alongside eleven other writers, I studied with Jewelle Gomez, the revolutionary Black Indigenous lesbian feminist poet. Not only is Gomez a fine poet in her own right, but she is a direct link to the legacy of feminist scholarship that I studied in my undergraduate days. Gomez studied with Audre Lorde. The first time she referred to Adrienne Rich on a first-name basis, I cried.

Each of the writers in our poetry workshop had a generous half-hour one-on-one workshop with Gomez before the end of the week. During my session, she read excerpts from my poetry thesis, focused on lesbian-to-lesbian domestic & sexual violence. Five years ago, I couldn’t find a queer-friendly counsellor who had any experience working with those issues. Two years ago, I couldn’t get any research funding for my work. When I met with Gomez, none of that really seemed to matter—because she understood that it mattered.

Lambda was also the first opportunity I had to write in a group of predominantly women of colour, which was radically central to my own coming-out process as a woman of mixed race after years of internalized racism. Of course, there were challenges. Nowhere do the discrepancies in privilege between white gay men and queer women of colour become so apparent as in an eight-day retreat in a canyon. There was much work to be done around trans* inclusivity, the use of gender-neutral language, and safety when writing through trauma. And much of the scholarship money that got me to the retreat came from Amazon, the giant responsible for the closure of so many independent bookstores that are crucial in preserving our queer literary histories. I learned more about direct action, constructive call-outs, accountability, and teamwork in those eight days than I have in any other endeavour. I made new best friends, connected with extraordinary elders, and even wrote some pretty good poems, too—and became part of a legacy of knowledge that I can bring back to the communities that helped me get to Lambda in the first place. And I’ll never forget it.

The Lambda Literary Foundation has just announced the faculty for their 2013 Emerging Writers Retreat; you can check them out and fill out an application at http://www.lambdaliterary.org/writers-retreat/.

LEAH HORLICK is a lesbian poet and Plenitude contributor from Saskatoon. Her writing has appeared or is forthcoming in So To Speak, Canadian Dimension, Grain, Poetry is Dead, and On Nights Like This: An Anthology of Comics by Survivors. An MFA student in Creative Writing at UBC, Leah works as the Poetry Editor for PRISM international. Her first book, Riot Lung, was published by Thistledown Press in 2012. She and Esther McPhee organize Litany, a new queer reading series in Vancouver.