even if he loves you,
even if he knows how to love you well,

your white cisgender boyfriend can’t save you:
for all the strength
you imagine into the curves of his arms,
no matter how tightly you have taught him to hold you,
the circle of his embrace is not a fortress,
cannot keep out the cold, the rain, the memory of your father
striking you across the face,
could not hold back a horde of ravenous flesh-seeking zombies
from coming to devour you, high-heeled boots and glitter lip gloss
and all,

even if he has read every single internet article in existence
about the top 11 ways to be respectful to a trans girl,
even if he has educated the shit out of his privileged white self,
he will not, can not know
the hidden road through the invisible minefield
that trauma and rape
have made of your body,
he will never be fluent in the secret language of your scars,
when all the city lights go out in the wake of the apocalypse,
it is you who will have to lead him to safety at night
by following the diamond map of the milky way,

you could spend your whole life trying
to find a way into his skin,
to wrap yourself in the blanket of his safety,
his normalcy, the ease with which
he moves through the world,
but sooner or later,
you will fall through his fingers like water, like smoke,
like diamond dust,
every time,
every time. 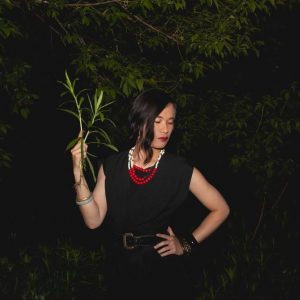 Kai Cheng Thom is a spoken word artist, writer, and social worker based in Montreal, unceded Kani’enkehake territory. She regularly contributes essays to such publications as Buzzfeed, xoJane, and Everyday Feminism, while her poetry has appeared in Matrix, ditch, and other publications. Her first novel is forthcoming from Metonymy Press in Fall 2016, and her first collection of poetry from Arsenal Pulp Press in Spring 2017.