I’m looking at my window when I realize there might not be anything special about it. I had always thought that it would reveal something—about the way dull senses wake up, without explanation, after years of monotony, or why walking down your childhood street can evoke a deep and sudden alienation. The window is gated, and padded with bubble wrap. A previous tenant had painted the gating red. Now the colour flakes and collects dust.

If I’m sitting at my desk with the window open all I can see is the building across the street and the tops of cars, but if I stand I can catch some blue sky.

Before I was able to remember things well, my mother and I moved from Prince George to Vancouver, driving eight hours in one day. While crossing a bridge in some backwater town, I saw a flight attendant walking along the pedestrian path. I used to admire put-together women—the type who wore soft stockings with matching skirts and blazers.

Just as we were about to pass the flight attendant, she hoisted herself onto the railing and toppled over. I tried to get a better view, but my mother’s arm pinned me to my seat.

My mother maintains this is one of those made-up childhood memories—the result of too much TV and imagination. Like the time we were sitting in the car, greasy burgers in our laps, and I heard a woman cackling somewhere outside. I wondered aloud what she thought was funny.

“That’s a woman who escaped from jail. She’s free now,” my mother said.

Of course she has no memory of that event either. She said that being an only child made me prone to hyperbole.

I believed her on both accounts until I was twelve. I went for a sleepover at a friend’s house. After trying to smoke our hemp bracelets, we watched a movie about a star who gets knocked from the sky and craters the earth as a woman. As the star fell, I saw the flight attendant’s eyes—they were brown near the pupil and green at the edges. The movie was supposed to be funny, and my friend laughed throughout, but I couldn’t. I was struck by the same feeling of lonely reverence whenever I stood in a new room before unpacking.

Another sign came in my last year of high school. My English teacher showed our class The Most Beautiful Suicide. He pulled it up on the projector as if it was an ordinary photograph. In it, Evelyn McHale is always laying in a pool of wreckage, the crushed metal always looks like dark water catching light.

After class, I couldn’t get the code to my locker right. One moment I was seeing the flight attendant sitting at a picnic bench eating a hotdog with ketchup, the next I was seeing Evelyn McHale’s pale, bare foot.

Since then there has been nothing, but I’m sure tonight is the night. All this week, I’ve felt an electric dust on my skin. Each time I open a door I receive a static shock. Yesterday, as I waited in line for a coffee and a muffin, I overheard two men talking about a woman who threw herself off a bridge and lived. They said her hair went white.

I open my window to let in some fresh air and see an old woman smoking in front of the building across the street. We watch each other for a moment, and I’m reminded how my mother used to smoke in the car.

Walking along the river, I hear creatures shuffling in the tall grass. Clouds hang low in the sky. Wild half-dead buttercups are trying to shimmer in the fading light. When I look up, I see a figure on the bridge leaning against the railing.

I swerve off the path and up a set of concrete stairs tagged with graffiti. There are no lights, and there’s a slight slump in the middle of the bridge. The green paint flakes off, revealing an industrial silver. As I walk, the colour changes—what looked forest-green starts to decay.

A young woman has her hood pulled tight. The white light of her phone illuminates her face. As I approach, she angles herself away from me. When I catch her eye I don’t see a single thing—no visions of the flight attendant slipping off her shoes and rubbing her tired feet. My heart drops as she walks away, and I realize whatever was supposed to happen, can’t.

A car passes behind me and I catch a fragment of the song from its radio. Below us, the streetlights reflect as flickering gold discs on the black river. I feel heavy and senseless. I just want to be unhinged from my body, to finally sparkle. 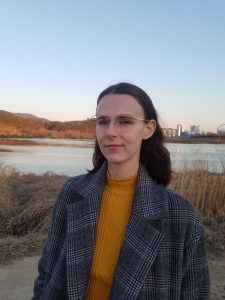 Clara Otto is a writer and teacher living in Jinju, South Korea. She graduated from the University of British Columbia in 2016. Her work has been published in The Maynard and Aesthetica’s 2016 Creative Writing Anthology.