A woman who was in my kindergarten class remembers me as the girl who had a crush on the Ghostbusters.

I didn’t crush on all of the Ghostbusters, mainly the quirkier of the bunch: Egon Spengler and Peter Venkman. In Venkman, I found humour, self-confidence, street-smarts, and flirtatiousness. While I did enjoy Bill Murray’s portrayal of Venkman, I preferred the character from the 1986 animated series, The Real Ghostbusters. Unlike Murray’s version, he appeared on television daily, and this one obviously cared about his hair.

When it came to the brainy, deadpan Egon Spengler, it was all about Harold Ramis. Not only was he handsome, he was smart. Looking back on my romantic history, I see that Egon became my attraction prototype: glasses, intelligence, Adam’s apple.

Adult-me hasn’t been much into blondes, but at the time I had these obsessions, I wished that I was blonde. I was the Chinese-Croatian girl with short, near-black hair. At school, my classmates continually asked me, “Are you Native?” First Nations people were the only non-white people they had been exposed to. My neighbours had blue eyes and light blond hair and took me to worship with them once a week. I prayed to their god, giving him an ultimatum that if he was real, he’d make me blonde like my Barbie doll. Blonde like the girls I kissed in class.

When I wasn’t infatuating over Ghostbusters, I watched Get Smart for the pleasure of seeing Agent 99 run around with her gun pointed. I enjoyed the eye candy in the original Batman series, unable to make up my mind between Burt Ward or Adam West. I did know that I wanted all the Catwomen, with a side of Batgirl. When it came to Gilligan’s Island, I wanted Ginger, the Professor, and Mary Ann Summers. How could I want only one?

Growing up on rural Vancouver Island, my portals to other worlds were limited to the offerings of television and my Disneyland-obsessed neighbours. I didn’t recognize how narrow this was at the time. When I entered public school, I was in awe of how many wonderful people existed. It was a new world that brought with it a kind of freedom. This freedom manifested in kissing my classmates.

“Why do you kiss everyone?” my classmates asked. They weren’t always willing participants, and I felt bad chasing them around the playground, but again, how could I not?

At recess, the older kids taunted, “Are you a boy or a girl?” I was pretty sure I was a girl, but didn’t understand why I wanted to kiss boys and girls when I knew I wasn’t supposed to. Gender didn’t matter. Age didn’t either; I recall not just kissing my classmates, but the grey-haired school principal too. I loved to love.

Star Trek: The Next Generation debuted the year I entered kindergarten, presenting a whole new cast of people to crush on. Even at that age, I knew I wanted to be commanded by Lieutenant Riker. I wanted my face in the scoop of Deanna Troi’s cleavage, my hands in her curls. I kept a picture of her by my bedside. She was the first non-blonde woman in the popular culture that I was exposed to. In the late eighties, people who looked like me didn’t have a place in mainstream entertainment, and there were few other opportunities to see myself reflected in the culture that surrounded me.

Before Deanna Troi, Snow White, with her hair as black as night, was the character I most closely identified with. I wished to have a loving, communicative relationship with animals, and to live in a house in the middle of a forest with a harem of men. I still do.

I know I’m not the only person who lusted after an animated character as a child. What kid wasn’t a little turned on when Bugs Bunny dressed up as a woman? Did Looney Tunes and The Real Ghostbusters make me this amorous? Did TV make me this way? Nothing I watched was overtly sexual, but I likely noticed the innuendo here and there.

My loving, heterosexual parents have been together my whole life and seem to be enough for each other. They weren’t overly affectionate or sexual––well, at least not in front of their kids. Where did I learn that I needed to push the boundaries of what society wanted for me sexually?

I remember my dad driving me to my (girl) friend’s house when I was a teenager and asking me, “You’re not gay, are you?” How was I supposed to answer a question like that? That moment enforced the idea that I shouldn’t like girls. Back then, I often had short hair and wore my dad’s clothes. Classmates now called me “dyke.” It didn’t help that one of the first concerts I went to was Melissa Etheridge. I purchased a bandana at said concert which was covered in the Venus symbol. When someone commented on how lesbian it was, I felt ashamed. I didn’t know what to do with this shame, or the bandana.

In my small town, all I knew of relationships was guy + girl = normal. Anything else was bad. It’s been a pattern throughout my life that I’ve wanted things I shouldn’t, making me feel like a bad person. But as Murray’s Venkman famously said, “I’m fuzzy on the whole good/bad thing. What do you mean ‘bad’?”

I eventually learned to stop kissing my classmates. I suspect they were happy about that. I grew up focusing my adoration on males, though I was never able to pick my favourite New Kid on the Block. I told my friends that being Chinese rendered me incapable of understanding this cultural phenomenon. They bought my story, and maybe there was some truth to it, too.

As a late-teen at a concert, I was surprised when a girl grabbed me by my studded belt and pulled me to her. We later made out behind the venue. I knew I wanted men, but I also wanted this. More women had to grab me by the belt before I realized that I had repressed my desires.

It’s a cliché that women go through their experimental phase in college. I didn’t go to college, but when I moved out from my childhood home, I moved in with an attractive bisexual woman. Looking back on it now, I’m not clear what the nature of our relationship was. We loved each other, but saw other people. She used to pride herself on her lack of emotion, but when I told her I was moving in with a man, she cried for days.

When it came to being with my roommate, men loved seeing us together and it was precisely this fetishization that scared me from being with women. She and I met at the restaurant where we worked with three other Asian girls, and I witnessed Asian fetishization for the first time. I saw men in their late twenties flirt with a fifteen-year-old Filipina busser. They were more direct with me. I was seventeen when I started, and I quickly learned that my Asian-ness was now something I needed to be cautious of in a new way.

I now live in Vancouver, Canada, where bisexual, biracial folks abound, and I no longer feel abnormal. But even in this city with all that it has to offer, I reserve my kissing for my husband. To the outside world, I pass as straight and monogamous because of my marriage, but I’m still the Chinese-Croatian girl with near-black hair who loves to love. I accept the complexity this loving brings, although navigating my preferences hasn’t gotten any easier since kindergarten. I’ve kept my sexuality private until now as I feel it should only matter to myself and those I’m in relationships with, but I also recognize that bi erasure is real, and keeping silent about it doesn’t help the issue of invisibility.

My affection for Venkman has faded, but my love for the Harold Ramis-Egon lives on. Funny that the girl from my kindergarten class remembered my Ghostbuster-crush more than me kissing her nearly every day. When I think of her, that’s what I remember. 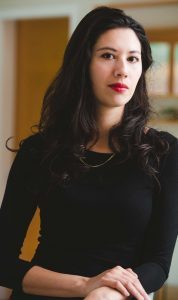 Leanne Dunic is a multi-disciplinary artist who produces trans-media projects such as To Love the Coming End and The Gift (both from Book*hug). She is the fiction editor at Tahoma Literary Review and the leader of the band The Deep Cove.

This essay touches on material from her forthcoming book, a lyric-memoir.