In connection with this year’s free and virtual Victoria Festival of Authors taking place September 30 to October 4, Plenitude poetry editor Rebecca Salazar interviewed VFA panelist Danny Ramadan about his writing, fundraising work, and literary festivals. Queer Existence is Resistance: the Power of QT2BIPOC Futurisms takes place Friday, October 2, and Danny will be participating in the panel alongside Serena Lukas Bhandar and jaye simpson, with K.P. Dennis as moderator.

Danny Ramadan is an award-winning Syrian-Canadian author and LGBTQ-refugees activist. The Clothesline Swing, Ramadan’s debut novel, won the Independent Publisher Book Award for LGBT Fiction, The Canadian Authors Association’s Award for Best Fiction, and was shortlisted for Evergreen Award, Sunburst Award and a Lambda Award. It was longlisted for Canada Reads 2018. The novel is translated to French, German, and Hebrew. His children’s book, Salma the Syrian Chef, was released in March 2020 by Annick Press. He lives with his husband, Matthew Ramadan, in Vancouver. 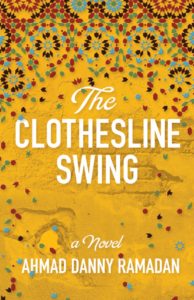 In addition to your novel, you also recently published a children’s book, Salma the Syrian Chef (Annick Press). What drew you to children’s writing, and how do you personally approach writing for children?

I truly see Salma the Syrian Chef as a collaborative effort. Some of my earliest published work was writing comics and short stories for children’s magazines in Arabic, which I enjoyed quite a lot. Annick Press saw a space for a story about the refugee experience that needed to be told. The stars aligned, and the idea of writing Salma was born.

Then comes the challenge of finding the right story for Salma. There is a misconception that when a refugee arrives in Canada, all their troubles are left behind. This idea that “here is better” while “there was hell.” I wanted to write a story about the experiences of newcomer families, while holding space for the challenges newcomers face upon arrival. I also wanted to write a story that highlights the beauty and intricate details of Syrian culture, while celebrating the ability to integrate that into the Canadian mainstream.

Then, one day I made a Syrian dish for my friends for brunch, and by the evening, I wrote the first draft of Salma the Syrian Chef.

I wanted to write Salma as driven, optimistic, and first and foremost as an independent child who can fix her own issues with some help from the adults around her. I think such a character will be attractive to children, and allow them to see themselves in it. I also wanted to write the light-hearted story, rather than a heavy-handed refugee story. I think the themes of food, community, joy and culture are what drove the book.

The narrator of The Clothesline Swing self-identifies from the earliest pages as “a fabulist, a writer, a hakawati.” That title becomes a term of endearment used by his lover, a spiritual self-proclamation, and a political position. His storytelling becomes a way to save lives, especially as they are physically haunted by Death throughout the novel. Given the current global pandemic and accompanying political uprisings, how do you see the role of storytellers today?

The Clothesline Swing is your first published book in English, after two short story collections in Arabic. As someone who writes primarily in English, which is my second language, I wonder how the cultural and structural differences between your mother tongue and English manifest in your writing process?

There are 590 million words in Arabic, while English has around six million words. I would say that navigating the two languages together in the writing process is … interesting?

Let me give you an example: There are over 30 names in Arabic for the different stages of a sunrise between the time right before the dawn all the way to the early morning sun. Each is specific and meaningful and poetic and responds to colour, warmth, feel and relation to religious practices. That sophistication in Arabic that I was gifted with allows me to see possibilities in the English language. It allows me to create specific complex metaphors and deeply felt similes.

I guess what I’m saying here is: writing in English as my second language can be a burden; my grammar sucks and my spelling is suboptimal (did I spell that one correctly? Word seems to think so!) But it also gives me a uniqueness to my writing that I aspire to enhance. I read the latest novels in Arabic all the time, and still find myself amazed on how an author turns a phrase there, then I ask myself: How would I learn from that? How would I use that in my English-written art?

In July, you hosted the Queer Arts Festival’s annual “A Night of Storytelling,” a showcase of 2LGBTQ+ writers that was broadcast virtually this year. I was struck by a story you told about introducing your husband to your family, and realizing that in Arabic, “there’s no word to describe the husband of your uncle from your mother’s side.” I have struggled with my own mother tongue, Spanish, which has few gender-neutral terms or pronouns for my non-binary kin. Can you say more about your relationship with a language that needs new words to describe queer families?

That’s a deep cut! Someone did their research! I think languages are fluid in nature. They are used to describe things that are new or unnamed in the human experience. I think sometimes that it’s funny when people resist bringing in new words to describe queerness and transness. They type their discontent on keyboards attached to computers and laptops and post them on Facebook, which they signed up to on their Google accounts. How many of these words I just mentioned are invented in the last thirty years to describe concepts we didn’t have before? How many of these words were modified to mean something else entirely than what they meant in the past? Sometimes, the resistance people have to using language in a positive way to describe queerness has nothing to do with betraying the language we were born into and much to do with internal inability to face homophobic or transphobic tendencies.

But then again, there is beauty to the familiar; a comfort of sorts of doing something the same way we used to do it before (if COVID19 can confirm anything, it would be our need for routine and normality in our lives). I think my relationship with Arabic and navigating it to include queerness is in a way building the new familiar, and allowing it to become part of our day-to-day dialogue. It is removing the barrier that forces people to see queerness as other, and allowing it to become part of the daily conversations we have.

At the Victoria Festival of Authors, you will be part of a panel of QT2BIPOC writers on the theme of Futurisms, Surrealisms, World Building, and Magic, hosted by K.P. Dennis. The Clothesline Swing begins with an epigraph from Gabriel García Márquez, the Colombian writer often attributed with the origin of magic realism, and many elements of the novel echo this genre’s politicized magics. What made a magical mode of seeing the world necessary for this novel?

My childish mind? My need to pepper my fiction with fairytales? The alluring sense of including an impossible character into a probable world and seeing the results? I honestly don’t know. I guess it’s the style of writing that fits the stories I want to tell. Stories that, much like fairytales, sees the protagonist facing impossible odds, but holding on to morals, values and the ability to sing to birds and deer.

To be honest, when I sent The Clothesline Swing to publishers here in Canada, I faced this peculiar situation of getting interest right away. That’s unusual, as many unknown authors won’t dream of such opportunities. But, my identity as a Syrian refugee truly attracted publishers.

But then, they read the work, and they asked for changes. They asked for a linear storytelling and a removal of the magical elements and focusing on the trauma. I resisted that notion, honestly, as I felt it betrayed my own writing and my own voice. I also resisted this narrative of beginning the story with a traumatic gay-bashing of sorts and ending it with a happy make-out session at the Vancouver International Airport. That did not ring true to me.

I’m thankful I found a publisher who accepted the manuscript with the magical elements in it, or else honestly the book won’t be out and I won’t be here talking to you.

Through various activist projects including your annual An Evening in Damascus fundraiser, you have raised thousands of dollars for queer and trans refugees, even helping almost two dozen refugees find homes in Canada. I am interested in the way both your writing and activism address the erasure of QT2BIPOC from narratives and decisions about the future. What are your dreams in the work of imagining possible QT2BIPOC futures?

I think the systemic oppression of minorities through various aspects of our daily lives contributes to the narrative of the heroic Queer: this representative one singular person who gets published, gets the awards and receives the grants, which in turn eases the guilt of those participating in this umbrella system. That to say, I am the only Syrian-Canadian queer author I know who is published in Canada (if someone is like me out there, please let me know—it’s lonely sometimes). I spent six years here being on panels and workshops and attending festivals and Zoom calls, and the very first time I was on the same panel as another queer Syrian creative was in July 2020.

The fact that I am receiving my recognition does not take away from the fact that erasure of the many other artists like me who might not have the opportunities I received, or the voice I have that allows me to do the things you named in your question.

Saying that doesn’t take away from the hard work I have done; it’s not black and white. I maybe be a token speaker on a random panel, but I won’t be silenced and complacent about it.

I facilitated the paths for two dozen refugees to find homes in Canada; that’s true. But I don’t think of that as helping them. Each one of these refugees had to pave their own road and help themselves come here. They are letting go and sacrificing a lot to get themselves a better future here. I wish to be able to facilitate a similar experience to other QTI2BIPOC folks; I’m hoping that every time I see someone driven, I can offer them a hand as they build their own futures.

According to your website, you are currently working on two novels and a short story collection(!). Can you give readers any hints about what to expect from these projects?

I thought you’d never ask! I’m finalizing my next novel The Foghorn Echoes [working title], which navigates the themes of trauma, racism in the gay community, and the way we see ourselves through the eyes of others and through our own perspectives. The collection of short stories titled The Eight Gates of Damascus [working title] follows the lives of eight characters navigating their own troubles while willfully ignoring the impact of the civil war in Syria on their lives. The second novel is a Young Adult book, titled Son of the Silk Maker, which needs some more love from me in the coming months! Wish me luck! 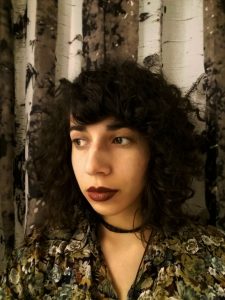 Rebecca Salazar has published poetry and nonfiction in journals including PRISM international, Minola, and The Puritan. She was a finalist for the 2019 Writers’ Trust RBC Bronwen Wallace Award for Emerging Writers. Her poetry chapbook, Guzzle, was released by Anstruther Press in 2016. Originally from Sudbury, Ontario, she is currently a PhD candidate and Vanier scholar in New Brunswick.