In connection with this year’s free and virtual Victoria Festival of Authors taking place September 30 to October 4, Plenitude prose editor L’Amour Lisik interviewed VFA panelist Catherine Hernandez about her second novel, Crosshairs. Hernandez is a proud queer brown femme author and artistic director of current performing arts. She is of Filipino, Spanish, Chinese, and Indian heritage, and is married into the Navajo Nation. Hernandez is the author of the novel Scarborough, which is soon to be a motion picture; won the Jim Wong-Chu Award for the unpublished manuscript; was a finalist for the Toronto Book Awards, the Evergreen Forest of Reading Award, the Edmund White Award, and the Trillium Book Award; and was longlisted for Canada Reads. 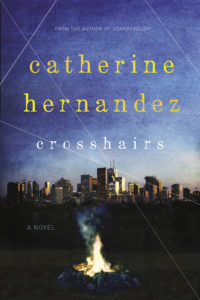 For this year’s Victoria Festival of Authors, you’ll be part of the panel Simply Unbelievable: Fresh Fiction for Unfathomable Times, joined by Doreen Vanderstoop, Zsuszi Gartner, Mallory Tater, and moderated by Matthew J. Trafford. Your upcoming book Crosshairs in particular deals with “a terrifyingly familiar future.” Narratives set in the near future have often been used as a teaching tool, or a warning. What do you think narratives such as these can offer us today, and especially this year? What are some of your favourite novels/plays/poems that also take place in “a terrifyingly familiar future”?

I’ve been making political theatre for a while now and one thing I quickly realized in my artistic practice is that audiences don’t necessarily connect with historical facts. They connect with the emotional truths behind those facts. We could easily list off statistics but it’s the stories of people’s experiences that inspire people to take action. With Crosshairs, my hope is for readers to see the potential of embodied allyship. The only way I can do that is to parse out all the ways oppression plays out in society and festers in our bodies by telling deeply personal stories of characters living through a genocidal campaign. My favourite novels that achieve this same affect are Parable of the Sower by Octavia Butler and Ocean of Minutes by Thea Lim.

Congratulations on Crosshairs! Due out in September this year, it’s set in Toronto, where communities of colour, 2SLGBTQIA+ folks, and disabled people are forced into labour camps. We meet the main character, Kay, “a Queer, femme Jamaican-Filipino man,” as he’s hiding in a friend’s basement, unsure of when he’ll have to run again. When you began envisioning this story, what drew you towards centering Kay?

I wanted to capture this strange dichotomy that occurs in the wake of genocide. When interviewing survivors, there’s this feeling that the campaign came out of nowhere, that it climaxes into mass destruction in a matter of months then is swept under the rug of shame quickly after. Simultaneously, genocidal campaigns unfold after generations of underlying conflict and developing misconceptions about particular groups of people who then become the target. For Kay, I wanted him to be someone whose personal narrative captures this dichotomy. He has lived an entire life of abuse for being who he is (gay, feminine, mixed-race Black) and he experiences first-hand a genocidal campaign that unfolds over the course of only half a year.

You’ve also written several plays, two children’s books, and you’re working on the screenplay for Scarborough. Do you have any writing techniques and/or habits that have served you well throughout all of these projects? How did you begin to approach writing Crosshairs?

Everything I write, including Crosshairs, exists because the universe and my ancestors have gifted me with these words. In order to align with this energy, I ensure that I am well-rested, that I care for my body, eat well and surround myself with people who inspire me. For Crosshairs, the universe posed this question to me: “What is the price of being passive in the face of fascism? What is the price of fighting back?” From there, I simply aligned with the energy, allowed images and words to fill my body and committed them to the page.

This year’s Victoria Festival of Authors will be virtual and completely free. Are there any authors you’re really excited to hear from?

I’m truly excited to catch all of the events and see all of the authors in action.

Do you have any advice for emerging writers and artists that you may have found useful when you were starting out? 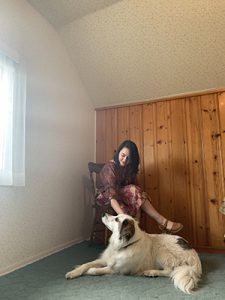