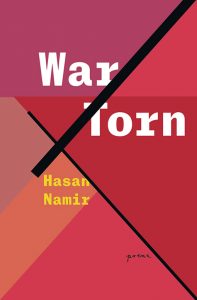 Hasan Namir, celebrated author of the novel, God in Pink (winner of the 2016 Lambda Literary Award for Gay Fiction), is back on the literary scene with his essential debut book of poetry, War/Torn, published by Book*hug Press. While God in Pink depicts the complexities of being queer and Muslim in Iraq, War/Torn captures the tensions and intersections of religion and masculinity within the country. Released this year, it is a literary work which doesn’t shy away from the personal and political, instead taking a full-cost accounting of how these two forces shape inner landscapes. With this collection Namir proves his abilities as a writer—to be a tender, raw and thoughtful viewer of the world, and to share with insight and confidence the trials of horrendous oppression and war.

In the poem, “How to Kill Homosexuals,” this is examined in the most blatant terms, in the style of a list poem whose details and minimalist approach expand the greater concerns that Namir interrogates with concern and poise and in a voice both confident and bold, that at times trembles with the difficulty in trying to rectify these multi-faceted parts within a single identity:

HOW TO KILL HOMOSEXUALS:
1. Rub surfaces with lube
2. Condemn them Shayateen Lut
3. Shame them
4. Strike them with shoes
5. Let your spit drip
6. Ease with tension
7. Whip their flesh
8. Stone them to death
9. Gently push a finger or two
10. Hang them until
11. Push in
12. Turn them out

What grips about this poem is how the point of view implicates the reader. “Let your spit drip” puts the reader over the victim, letting their spit drip in a cruel, teasing way as the victim lies on the ground, or is perhaps held down. A great poem lets the reader speculate, make their own pictures, and this short poem has another instance of that in line ten with the line, “Hang them until.” The “until” can be read in a way that implies a death, as the line is literally left hanging, and followed by the following line, “push in where it could be seen as the body being swung from the noose, by a hand pushing it. For such a short, concise poem, it is stunning in its movements and implications, like most of the short poems in this text, taking on important topics and not backing down from using visceral imagery when necessary.

Bold not only in voice, Namir shows himself as a technician when it comes to form in this text. Jumping from more free verse poems, to visually stunning lists, included in the book is a poem/play, Mosque/Internal laced with poetic devices and yet pushes, as every book should, what a poem means, and what a poem is. Three pages in length, the poem/play juxtaposes religious language (denouncing homosexuality as a sin) with a passionate love scene between two men. Inter-spliced in the stage directions, this language along with the images create tension as throughout the poem/play, the main characters express fear of being caught in a homosexual act. Through Namir’s use of poetic tactics, using the form of a play, his juxtaposition of image and language, shows what is at stake for these men. The poem also acts as a microcosm for the message of the book, of being torn between two worlds, two events.

Another feature of the book, and one that deserves attention in this collection, is the pagination of the poems, how each poem follows their companion. For example, the poems, “Where is My Son?” and “Where Is the Snow?” mirror and excavate the dynamics of family using religious imagery and derogatory slang words to tighten emphasis on the themes Namir tackles so fearlessly in the book. Consider this striking line where a son is rendered invisible and excluded from the family: “I walk outside and I see a faggot/Where is my son?/Where is my son, dear sisters?”

The book is framed by the refrain, This is 1990/This is 2011, which Namir uses as a lens to examine place, time, and geography at the time of the Gulf War, and to keep these experiences within two spaces in time.

With this being said, there are beautiful moments of acceptance, and reconciliation and love poems within the book. For instance, “Jannah,” a poem dedicated to a mother, followed by “Jannah II,” in which queer people come to accept themselves despite how cruel, at times, the world may seem. Also in this collection are intimate poems about sexuality, shining secret moments that play like a counterpoint to the violence through the text. The poem “Blow” flows with passion for a lover that cannot be restrained. The speaker in these poems knows that homosexual love is taboo. He also knows that love and intimacy with a lover are needed like air, and that is a powerful medicine.

All in all, War/Torn is an essential read that addresses the limits of love, as it casts shadow, and also shines light on what it means to be torn between duty and desire. 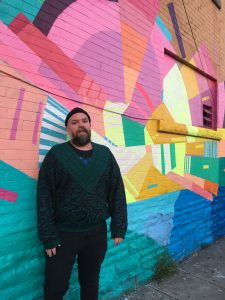 Matthew Walsh is the author of These Are Not the Potatoes of My Youth. They completed an MFA at The University of British Columbia’s Creative Writing program, where some of the poems for that collection were written. Their work can be found in The Malahat Review, Plenitude, and Train: A Journal. New work is forthcoming with Pulp Literature.