On our first date, I throw crumbs to water-
fowl. She says bread makes birds sick,
It’s like junk food for them. Don’t
let them eat the crust.

On our second date, he pushed fingers in, and I
opened up,

thinking it was the same

On the third date, they saw
a daughter, profligate-grey, who would

the stuff of one-liners.

In the shallows, recall a lone cat-
tail
calling out for touch.

Sleep-
walking moth to lighthouse, I must be still

reminded the thing I crave is not
what I deserve

of breaths for a match burning
down. 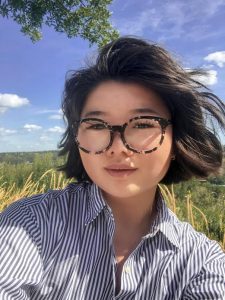 Isabel Yang (they/her) is a queer writer who lives and writes in and around Edmonton on Treaty 6 territory. Born in Wuhan, China, they immigrated to Canada as a child. At present, Isabel is completing a Bachelor of Arts at the University of Alberta. Isabel’s work has appeared, or is forthcoming, in publications such as Room and Glass Buffalo. They can be found online @sblyang.