instead, the next time her mouth opens
the snake-tongued road unrolls through it,
past the groves inland, to Mount Ida.
that morning, her brother cut songbirds
plume to chin to cast their smooth crop stones,
trace them like masts underwater. In turn
they recounted their dreams: in hers a white horse,
running, its flanks stained with river mud.
In his it was different: the horse brought down
by stones and bronze-head spears, and what
it foaled was heart’s-blood, an ocean of it rolling
against a ship adrift in ghost waters.

in the first days, before the black sails, he asked
her what the snakes whispered back when she
still thought a temple a place to sleep, a place
secured against capricious hands or men;
when she still thought you could throw truth around
like lit pitch and decide what wouldn’t burn.

and he laughed, and asked: no, really.

and here it is, the future: her mouth open
and all the voices through it, whispering, whispering;
her scabbed palm wrapped around carved marble
and a scabbed palm on her breast, a dark, mysterious
stranger and a sea voyage, and then the knifepoint
of another woman no one listened to.
heart’s-blood, an ocean of it, and ghost waters.

a shift for your new year, as the walls rise higher,
shadows muddle on patrol across their battlements
and every night, there is torchlight from their regimentary fires,
the sound of hammers scurries ratlike through the dusk
and in the town, the householders of Troy, keys at their belt loops,
guess what they are building, and never look outside.

instead, the next time her mouth opens
the snake-tongued road unrolls through it,
past the groves inland, to Mount Ida. And
her feet on it walk, trot, canter, run,
up the hills where they will burn the olive trees soon,
off the page of the known world to where
the snakes live, coiled together, cool and safe
underground in their patient grottoes, whispering:

one good listener is worth a thousand prophetkind.
in the moment before the stones fall, the bird’s eye contracts;
in the ocean space between dreaming and first drawn breath—
go. do something unpredictable. 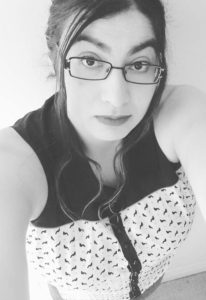 Leah Bobet’s latest novel, An Inheritance of Ashes, won the Sunburst, Copper Cylinder, and Prix Aurora Awards, and was an OLA Best Bets book; her short fiction is anthologized worldwide. She lives in Toronto, where she builds civic engagement spaces and makes quantities of jam. Visit her at www.leahbobet.com.