When I say strangle I don’t mean the hands
that crush the throat, but the body that won’t resist,
confident in its ability to hold its breath, or not.

There are nights when I wake up choking
because my body wills itself to stop breathing.
Tolerates few terrors of murderers or other lovers—

silent shouts of suffocation like when the devil
tormented me & I prayed in the name of Jesus
but my words were dry, no mountains moved.

A woman that I love was grabbed by the throat
& shoved against the garage door. How many times,
she won’t say, as if she’s stuck in a midnight paralysis.

We both fly in our dreams, under the branches,
face hovering over hot summer grass all turpentine
& musk, twirl through leaves

And yet by flying I mean falling—the cliffs
from which you can’t help but dive, air that ripples
in your ears as a wind-snapped war-torn flag,

that blinds your eyes as you cry, forces open
your lungs & mouth— the imminent taste of dirt,
the question of which bones will break first. 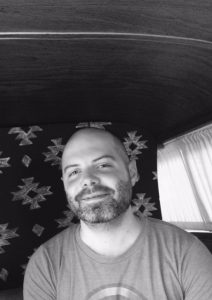 Originally from Michigan, Trenton Pollard is a queer writer in New York. His poems and essays can be found in Passages North, The Critical Flame, Bennington Review, North American Review, Dreginald, Permafrost, and elsewhere.