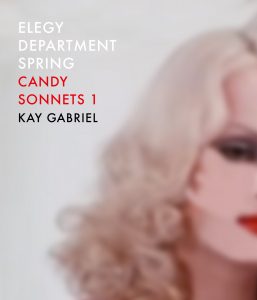 I read Kay Gabriel’s Elegy Department Spring in a coffee shop—which, looking back on my experience, seems to be the perfect place to read a poetry chapbook about the life and art of Candy Darling, a trans actress famous for her work in Andy Warhol’s films. A coffee shop is emblematic of what Homi K. Bhabha calls a third place: somewhere that is not just private or public, not home or work, but a hybrid place where identities and communities meet, mingle, and often change into something else. Kay Gabriel’s dense and melodic poetry about Candy Darling feels like a hybrid of a hybrid. Like a coffee shop, it is filled with numerous voices that hum together yet speak about different things, and being subsumed in this place can be familiar, while also distinctly strange.

Though I sometimes found it startling and overwhelming, I embraced Elegy Department Spring before I read the first words because I’ve long admired Gabriel’s work. Kay Gabriel, along with Stephen Ira, Liam O’Brien, and Rylee Lyman, is known for editing the trans-themed poetry magazine Vetch. Vetch has released three issues as of this writing and has had trans poetry writers I adore like Trish Salah and Jennifer Joshua Espinoza in its pages. But to say that the poetry in Vetch and Elegy Department Spring is the same because it’s trans is to mistake identity for genre. And Candy Darling, along with Kay Gabriel, is far more complicated than that.

Elegy Department Spring is a themed chapbook, but it doesn’t merely rehash the life and times of Candy Darling. We get glimpses of her acting work (in the poem “Metonyms for Flesh“), her life, and speculative reflections on her trans identity (such as in “Mooch New York” and “Prehensile Clit Club”)—but those pieces only make sense if the reader already knows who Darling is. And as Gabriel seems to imply several times in her poems, not even Darling really knew who she was; no one during this era and in the art scene ever really knew who they were. Andy Warhol (for his presence also looms large in this chapbook) fully endorses this stance of identity-as-artifice to the extent that toying with identity is poetry itself, and that is precisely the point. Elegy Department Spring isn’t just “trans poetry” because the subject and the writer are trans; this is poetry about transgender identity because it elevates identity itself to an art, much like Darling did decades earlier.

Candy Darling was ahead of her time, in art, fashion, and identity, and because of this, Gabriel’s poetry about Darling is somehow nostalgic while also seeming futuristic. Gabriel speaks about 1970s New York, making Darling seem like a faded figure on the 32nd Street Cinema screen, while also weaving in references to “trans Elle Woods” (in “Not for all the Links in Hyrule”) which make Darling seem more at home in a LiveJournal or MySpace selfie circuit. For those alive when Darling was, she was the trans tipping point before there was such a thing—but to the new generation of trans kids who now have better access to knowledge about their identity and community, she becomes transformed into a role model who doesn’t die by a hate crime. Instead, Candy Darling is Candy Darling, and like the poem “Girl as Adverb” she turns her identity as a trans woman into an accessory of her life, rather than the sole focus of it.

To those outside the trans and the arts communities, Darling’s name may not register. But her legacy inside both of these tight-knit communities is obvious and astounding when examined with such scrutiny and care as Gabriel uses. These poems are described as sonnets and many of them contain a tight control of language and the images rendered in them. But many also feel amorphous, a haphazard remembering of a distant past and/or a hopeful future. This is a testament to Gabriel’s rigour as an academic who will get her facts right (as she is currently obtaining a PhD in the Classics), but it also speaks volumes to her audience. Elegy Department Spring is a chapbook for people who know what she’s talking about, for those who can keep up, and though I love Darling, I sometimes felt lost in this world.

After reading Elegy Department Spring once, I had to take a breather before diving back in so I could fully comprehend what I’d just read. I needed to Google the references and re-watch Women in Revolt, a movie directed by Warhol and starring Darling. Hunting down metaphors and analogies is what English majors and high school students do in order to understand poetry, so it was oddly refreshing to return to this type of detective work as I read the twenty-seven pages again and again. This type of obfuscation in poetry can be frustrating unless the payoff is worth it—and I believe the payoff is worth it, while also acknowledging that this can be a dense, hard read that may put some people off. The arts community and trans community are small and sustained by specific language and customs. When they meet like this, they create a third place, a sustained hybrid identity and community that can create something wonderful—but only if you work at it. In this case, Elegy Department Spring and Kay Gabriel interpret a new understanding of an old figure like Candy Darling and place her inside a cinematic mythology where “the fantasy of intimacy in gossip rags or the languid tones of beaches” are as sacred as they are profane, and certainly worth remembering.

Evelyn Deshane has appeared in the Atlantic, Briarpatch magazine, and Bitch magazine. Evelyn (pron. Eve-a-lyn) received an MA from Trent University and is currently completing a PhD at the University of Waterloo. Their latest project #Trans is an edited collection about transgender and nonbinary identity online. Follow @evelyndeshane for info.