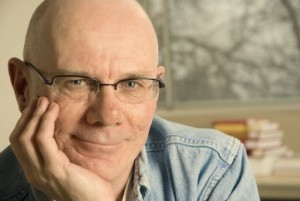 “Like many other readers I discovered Rebecca Brown’s voice through the unnamed caregiver in Gifts of the Body, her book of remarkably plain-spoken meditations that came from the AIDS crisis. I don’t know anyone else who writes like her, who takes the kind of chances she does. In The Terrible Girls and Annie Oakley’s Girl, she uses the second person in a way that simply took my breath away. She excels in brevity, and yet she can expand a single metaphor into an entire plot. (In The Children’s Crusade, ‘divorce is like a war zone’ moves the story from the suburbs to violent battlegrounds, the child narrator suddenly caught up between warring despots.)

“She is profoundly experimental because her writing is not only an investigation of language and form, it is also an exploration into the deepest (and sometimes darkest) corners of human relationships. Excerpts from a Family Medical Dictionary, for instance, consists of seventeen definitions (metastasis, hypnophobia, morphine, etc.) with exegetical texts that tell the story of her mother’s illness and death. There isn’t an ounce of sentimentality in it—it’s as rational as an equation—but it’s filled with heart and it tears you apart.”

Don Hannah is a playwright, novelist, dramaturge and sometime director. His pair of one person shows, The Cave Painter and The Woodcutter, are published by Playwrights Canada Press. The Cave Painter, which received the 2012 Carol Bolt Award, opened in Halifax on March 10, 2015. His novels, The Wise and Foolish Virgins and Ragged Islands, are both published by Knopf. Ragged Islands was awarded the Thomas H. Raddall Atlantic Fiction Award. He’s currently working on Missing the Zeitgeist, a book about outsiders.