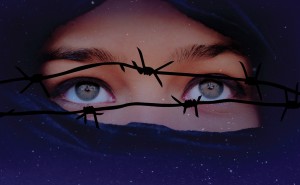 Like a conscientious hiker, Deborah Ellis treads skilfully through the historical terrain of her thirtieth work, Moon at Nine. The revolutionary tumult of 1980s post-shah Iran might not seem like fertile territory for a YA novel with queer and feminist themes, yet Ellis’s superbly crafted storytelling weaves together the ensuing political chaos with a teenage girl’s struggle to find her place within her restrictive society in a way that reveals the YA genre as capable of more than it is usually given credit for. That Ellis is so comfortable spinning so many plates at once is a testament to her authorial skill; that not one of these plates falls is what makes Moon at Nine such a cracking piece of literature.

As the novel’s fifteen-year-old protagonist, Farrin negotiates the lonely and authoritative world of her girls’ school. Her house is continuously abuzz with guests from her mother’s parties; Farrin’s father is a shrewd land developer who relies on cheap migrant labour. When Farrin meets Sadira, a clever classmate who shares her excitement for demon-slaying heroines, the two girls become inseparable. Just as the war with Iraq comes to an end and Ayatollah Khomeini repositions his oppressive campaign against his own subjects who he feels have been disloyal, the girls’ friendship drifts into romance. As Farrin lives through an impossible blend of academic pursuits and bombing raids, the girls’ burgeoning love affair becomes her sole motivation for survival. She is taken prisoner by the Revolutionary Guard on charges of deviancy: homosexuality is a charge punishable by death. Farrin’s story shifts into a gripping escape from Evin Prison to the refugee madness of the Afghan border and the enlivening promise of reuniting with Sadira.

Farrin’s character is as richly textured as the city she inhabits. She is a talented student who, despite coming in at the top of her class, still finds herself ostracized, forever trying to earn the social respect that will compensate for her difference. She realizes and embraces her sexuality with grace and maturity that are all the more remarkable given her cultural constraints: under the Revolutionary Guard, unmarried women are not even permitted the most cursory of freedoms.

But just as Farrin is charmingly relatable, so Ellis has crafted secondary characters who are vividly loathsome. The class monitor, Pargol, is a sinister foil to Farrin’s dreaminess: “In an instant, Farrin saw the smirk return to Pargol’s face and realized she’d been asked a question she had no idea how to answer. Which meant it was a dangerous question. In Iran, it was important to always be prepared with answers.” Farrin’s principal, aptly named Principal Kobra, is conjured in menacing dialogue: “Who do the demons represent? … You are fifteen, not five. Surely you don’t believe that fairies and pixies really exist. I know you’ve studied allegory in your literature classes. So I’ll ask you again and I want an answer straight away or I’ll have to start wondering if you are hiding something. Who do the demons represent?” It is a testament to Ellis’s ability that these women come off more as riffs on John Patrick Shanley’s stern Catholic nuns of Doubt—à la Meryl Streep’s Sister Aloysius—than on the cartoon caricature stepsisters from Cinderella.

But the demonic candidates are legion in Moon at Nine. They might be the girls’ cruelly strict teachers, or Farrin’s mother, whose oblivious nostalgia for the shah threatens them all, or the Revolutionary Guard, which deems freethinking girls to be a threat to the general patriarchy. The question of who the demons represent provides a broad invitation into the book’s more mature themes of women’s rights in Muslim countries, social oppression, and border politics with the added complexity of a lesbian romance. Ellis pulls them off with seasoned effortlessness.

Where Moon at Nine surprises most viscerally is in its last third. After Pargol catches the girls kissing in the school gymnasium, Farrin and Sadira are forbidden from interacting with each other. Plotting an escape to Turkey, they are captured by the Revolutionary Guard, separated, and forced into prison, where Farrin is subjected to beatings and deprivations: “Sometimes a door would open and she heard a sound like dragging across the floor, then that noise would stop and be replaced by other sounds. When the screaming stopped, she could hear people whispering prayers. The stench was terrible. People were urinating and defecating on themselves, and everywhere there was a smell of sweat and fear mixed with stale tobacco and blood.” Revealed in all its brutal incarnations, the world of Farrin and Sadira will no doubt surprise and chill the YA reader given its foundations in a true story. That the novel concludes with several heart-wrenching twists that will catch even the most observant reader by surprise renders Farrin’s suffering, her romance with Sadira, and the isolation she feels among her peers and family a sobering reminder of what barriers remain for LGBT people in so many parts of the world.

Moon at Nine is the romantic adventure tale longed for by queer teenagers prowling the school library for stories that more closely resemble their own. The novel’s foreign and historical setting are brought to life by Ellis’s energizing prose, and each character is fully realized as a layered human being attempting to negotiate and survive an oppressive political regime. While Deborah Ellis succeeds resoundingly in her pioneering position, Moon at Nine reveals that LGBT themes so dexterously written into YA literature are sadly all too rare.