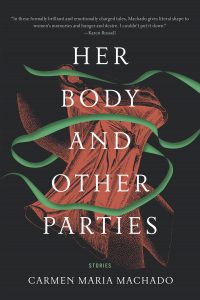 The strange beauty and terrifying brilliance of Carmen Maria Machado’s first short story collection, Her Body and Other Parties, cannot be overstated. These stories foreshadow and tap into the current cultural conversations around the prevalence and banality of everyday sexual violence in women’s lives, and refract some of our culture’s most intimate dreams and nightmares around sex and power back at us. This a collection that will soon be required reading for anyone interested in queer literature and the horrors inflicted on women’s bodies by patriarchal ideas and institutions.

As someone who has never experienced life as a woman, it was difficult to situate myself for writing this review. These stories are unsettling because there is no easy way out of the violence that blooms in them. It is hard to know what to say as a man about stories that are so specifically about men’s violence against women (and in some cases, women’s violence to each other). I have equivocated for months whether I should even be writing this review.

But part of the brilliance of these stories is that they reveal just how deeply and intricately men’s violence against women is woven into our world, and how it is such a necessary and compelling aspect of our very ideas of men and masculinity itself.  The violence in these stories, while always directed at women, turns out to be a violence that harms everyone: a violence that pulsates under cities and turns men into monsters, that reverberates across all kinds of real and constructed boundaries.

These stories transcend and subvert the genres of horror, fairy tale and magic realism and create something entirely new while doing so. Machado is fearless in her confidence to take and discard from each genre as she sees fit. The stories here deal explicitly with the female body, or more precisely, with what this world does to and with the female body. Everyday, ordinary life events take on terrifyingly mythic and surprising dimensions of violence, and more often than not, the violence pierces through the page and jolts the reader awake with its surprise and intensity. Machado is keenly aware of the power of fairytales and myths in constructing truth and reality, and she is excellent at subverting the stories that sustain the status quo: “[This] may not be the version of the story you’re familiar with,” a narrator tells us. “But I assure you, it’s the one you need to know.”

The opening and most terrifying story, “The Husband Stitch,” follows a narrator as she has sex for the first time and becomes a wife and a mother. She has a permanent green ribbon tied around her neck, the only place she asks her husband and son not to be touched. ‘The Green Ribbon’ is a well-known children’s . In the original story the girl with the green ribbon falls in love and gets married and grows old and it is when she is near death that her secret is revealed. Machado’s re-writing follows the same trajectory while complicating much of the resonance and meaning of the green ribbon and the violence it signifies. In this version of the story there are beguiling instructions and strange interludes consisting of fragments from other horror stories: “sing the half-remembered lyrics of old songs to the person closest to you, thinking of lullabies for children,” or, “if you are reading this story out loud, give a pairing knife to the listeners and ask them to cut the tender flap of skin between your index finger and thumb. Afterwards, thank them.”

The longest story in this collection, “Especially Heinous,” is a series of brief “recaps” of 272 Law & Order: SVU episodes. We follow detectives Benson and Stabler in familiar places and scenes, but it soon emerges that these aren’t recaps at all but something more sinister altogether. There are doppelgangers of both Benson and Stabler who won’t stop following them, and girls with bells in their eyes keep haunting Benson (these girls are, of course, the dead ghosts of sexual violence). What emerges in these recaps is a story so astonishingly well-plotted, so meta in its ability to “recap” the entire narrative of the SVU procedural, and so profound in the way it captures men’s violence against women as a kind of vibration in the earth echoing throughout New 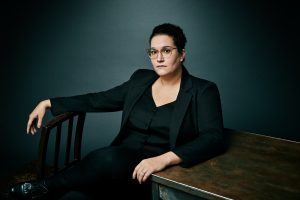 York City, that the entire pop culture reference is turned on its head and splayed open. Underneath the formality of the police procedural, beneath the ground of the city in which our two detectives do their work, lies a grim truth: the earth itself demands these sacrifices. The world in its current configuration, Machado seems to be saying, requires that so many girls and women be violated and that their violation be rendered invisible or at least inconsequential. The fact that this form works is truly astonishing, and it is a testimony to Machado’s audacity and her brilliance that it does.

In “Eight Bites,” a woman is haunted by the flesh removed from her body after she receives bariatric bypass surgery. In “Real Women Have Bodies,” the ‘ghosts’ of women who have ‘disappeared’ desire to be sewn into prom dresses at a local mall. These stories detail, with exquisite precision, the ways in which women’s lives are perpetually circumscribed by the violence around them. Despite the horror, many of these stories are also electric with desire and need.

There are some books that, once you have read them, make you exit a different kind of person. This is one of those books that delights in scaring readers with what is most familiar and mundane, and relishes in the opportunity to subvert many of the cultural and social narratives that continue to uphold a world in which the register of misogynistic violence continues to dominate.