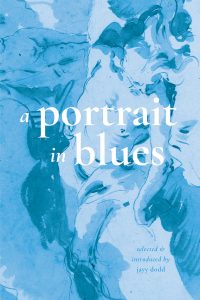 If I could sum up jayy dodd’s poetry anthology A Portrait in Blues in a phrase, it would be “so many, too much.” This utterance is my attempt to put words to a feeling that is—by the nature of feeling itself—transient, which is what many of the poets try to do in this anthology when speaking about their gender identities. As dodd says in the introduction, this collection’s goal is to “link language around the body to a landscape” but since the body exists in a state of “semi-permeances,” speaking about it “makes all it experiences susceptible to bruising.” The colour of this bruise is always blue.

When I first heard of the project, I thought of Maggie Nelson’s Bluets and her elliptical way of trying to encapsulate all that the colour blue meant to her. I was excited by the familiarity of the concept, while also disappointed that we weren’t moving on to different colours. Why not a story about purple? About red or orange or green? It’s always blue, though, that seems to be the most compelling and poetic, especially for queer people. I think of the endless stacks of “blue books” on my shelves that are not just washed in blue-coloured covers (Ashley Little’s Niagara Motel, Michael V. Smith’s My Body is Yours) but that call out blue in their titles (the classic Stone Butch Blues and Blue is the Warmest Colour). Then there is Laura Jane Grace’s and Against Me!’s first album post-transition Transgender Dysphoria Blues. Blue seems to be the colour for queers, and that’s not changing anytime soon.

As jayy dodd outlines in their introduction, blue touches so many periods, concepts, and history itself. There’s the blues music which speaks of resistance as well as mourning; the blue period in art, especially Picasso’s Old Guitarist that then becomes ekphrasis in Wallace Stevens’s work; the importance of water, especially during our current cultural age of global warming, so important that branches of study are being dubbed “blue humanities”; and then there’s the quotidian aspect of blue, the kind that Maggie Nelson spoke about in her work, which are just plain feelings. So, so many feelings. While I love Maggie Nelson’s Bluets, I see it more as a personal meditation and challenge on expressing what on first blush seems inexpressible–the poetics of blue and amorphous feeling, which is then a challenge and medication on writing itself.

jayy dodd’s anthology encapsulates Nelson’s vision with Bluets, but brings the personal into the political realm. dodd’s challenge for the anthology’s poets to describe blue in their work then becomes a wider challenge to the outside world to re-envision a particular group of people who have constantly been labeled as blue–in this case, transgender and gender non-conforming poets. Being trans is so often defined through negative feelings—a dysphoria that is difficult to bear—so it’s quite easy to feel blue. Blue, unlike its gendered opposite pink, also seems more malleable and less potent a colour in terms of the rigours of gender itself. Anyone can be blue, even if being blue also comes with sadness.

And there is a lot of sadness in this work. But also a lot of poems about love, about bodies, and about the wounding they endure, told from the perspective of the survivor. Being blue means you are alive, and it’s this survival through the colour itself which rewrites and redirects A Portrait in Blues from the personal meditation to political realm. dodd and the many poets in this collection stretch and challenge the idea of blue, what it can mean, and what it can do. And while there are so many colours that I still want people to write about, so many colours that I think could also be queer if we let them be, I’m amazed and delighted with how many shades of blue there were here. Many poems–such as “No Recital” by Peter LaBerge–subverted my expectation of what blue could do, while others–such as Anika Prakash’s “Girl’s color gone and bone given into an end”–gave me what I needed and wanted all along.

The poems are not organized by author in this collection, but by theme. At first, this threw me. I’m used to poetry collections dividing authors and listing all their works, one right after another. A Portrait in Blues, however, doesn’t pay attention to the dividing line of authorship; it is divided by a protean sense-memory. It’s poems that create a mosaic and mural of blue shades. This organization works exceptionally well when the poems feed into one another: when the admonishment of Emmanuel Oppong-Yeboah’s poem “the thing expressed” is then picked up in “white laboring class” by Joey De Jesus, or when A.E. Talbot’s poem “Cataract” ends with a hug, and then Laura Villareal’s “Apology” addresses the body. But it also detracts from the standout works that need to be read by themselves.

The first poem that pulled me in with its imagery was Jonathan Bay’s poem “Beginning”: “my toes / counted / ten times over / a repeat / like the first lucky clover / ever found.” The action of the doctor at a birth counting toes and deeming it lucky was sudden, striking, and unexpected to me—perhaps because clovers are green, and not blue. Similarly, “Juju” by Taylor Steele made me stop and take in their poem about how “every Black woman i know / believes in the magic of salt”; the images and sounds are sharp and clear—and again, the dominant colour is not blue. More than their incidental use of colour, these two poets gave me something to latch onto in the work, to prevent a feeling of drowning that blueness provokes. Because, as I said before, there is just so much here. So many sad poems, so many bruised and broken limbs, and so much water. It’s a river of pain that flows and flows and sometimes seems like it will never stop. The height of this sadness, for me, comes at the un-making of the trans community as expressed in JM Miller’s poem “silver-specked pumpkins return the sky to itself” when Miller states, “last night a trans woman was murdered, her undrawn constellation / lit a flame in a room that had forgotten itself.” The sadness simultaneously bonds but also breaks apart the community it attempts to represent. Numerous times I had to walk away from the collection, not because it was bad, but because it was hard. Difficult. Upsetting.

To pull myself out of my own sadness, I needed the stronger images; I needed poets to be isolated so I could latch onto them as lifelines to understanding, rather than pain that simply flows over. I needed the colours in this collection to be sharper and focused. So often there would be a stunning poem, but it would become too flat at the end, as if someone had taken a hammer to the sentiment, rather than letting it dissolve. But that was sort of the point of the collection as well. When in the moment of your own sadness, it can feel as if the hammer is the only tool for poetry. So though it sometimes made it hard to read, I understood the need to over-articulate; to yell, cry, and be utterly “so many, too much.”

In the end, I think my favourite poems are my favourites because they are so fundamentally about nature. I liked the images of the woods in “Morel Hunting” by Lauren Annette Boulton, of the foot and clover, of something like salt from the ocean because these images point to something larger than the feeling itself, which in turn signals an end to sadness. Sad becomes just a state of mind, of being, something that is transitory and will pass. It will flow away, like water, if you just wait it out long enough.