Friendship comes easy for me. It always has. Love is a wholly different card game. When I finally met the man I felt was my life-long love in Stephen, I was sure and contented. At twenty-seven, it seemed like I’d searched an eternity to find the real thing. I had known who Stephen was for two years before we met. Six months into our relationship, I confessed. He was really pissed off when I told him.

We met on August 2, 1986, Greenwich Village. The first time Stephen told me he loved me was on January 10, 1987. An easy date to remember—it was his thirty-first birthday. In March of the same year he travelled to a Mexican beach for business. A week after his return home, he began feeling sick. We assumed he inadvertently drank the water. Whatever the cause, he couldn’t seem to kick it. Mid-April, while at work, I received a call from Stephen’s friend Gail saying she had phoned for an ambulance and was taking him to the hospital. He couldn’t breathe.

Either not grasping the severity of the situation or because I knew he was with a close friend, I stayed at the office. Stupid as this now sounds, I remember him not looking sick. I planned to go to the hospital when I got off work. Three hours later Gail phoned in bridled hysterics saying that the doctor hadn’t yet arrived at the hospital, Stephen still wasn’t in a room, his fever was spiking and no one would so much as give him an aspirin.

Now, I’ll interject with something about myself. In emergencies, I become calm and appear in control. Having grown up in a medical family, I’m not intimidated by hospitals or doctors. I asked Gail for the phone number for the nurses’ station. I dialled. Using an authoritative tone that was respectful yet urgent, I said I was Stephen’s attorney and was curious why he hadn’t yet been admitted and would appreciate a resolution. Within ten minutes, two nurses and a physician called back with apologetic explanations. Stephen was checked into a room immediately. Incidentally, I’m not a lawyer and posing as one is illegal.

By the time I arrived at Columbia Presbyterian that evening, Stephen was in the ICU, on a ventilator. Though neither Gail nor I was a relative, the hospital staff allowed us in to see him. A considerate nurse gently warned us that the medical apparatus made Stephen’s complications look worse than they actually were. We weren’t prepared. A large tube was down his throat which appeared to be breathing for him, his wrists were restrained, and alarms kept sounding. He was periodically convulsing, opening his amber eyes wide with a look of helpless terror. It was unbearable to watch. When we left isolation, Gail ran down the hall screaming and threw herself on the floor sobbing.

I didn’t have contact information for Stephen’s family. One of his friends phoned his oldest sister as well as his mother and father, all living in the Boston area. So the first time I met his parents, both seventy-seven, was in the hospital while Stephen was in a coma. He had never discussed his sexuality with them. He had not discussed it with any member of his Catholic, blue-collar family. And they had no idea about me.

Once Stephen was taken off the ventilator he was moved to a private room. In a bleak hospital corridor I was matter-of-factly informed by his doctor that he had pneumocystis pneumonia. AIDS. His room was quarantined, but he was alive. Visitors came and left. I quit my job and picked up part-time freelance work.

At the time I didn’t know anyone other than Stephen who had AIDS.

Within a few weeks he was able to come home. Stephen was a good candidate for AZT, the only drug available in 1987 that could fight or slow down the progression of the disease, before the days of HIV inhibitors. The cost was twelve thousand dollars a month. He would have to liquidate all assets and go on welfare in order for Medicaid to pay for the treatment. One common side effect of AZT: blindness. Stephen was a photographer.

Stephen couldn’t afford to keep his apartment/artist studio so I offered to either move in and share the expenses or have him live with me in my one-bedroom West Side rental. I would have done either, but I knew he’d refuse. And it pushed him, as I thought it might, to say that he could not commit so seriously to me. The discussion continued a few days later in ways I hadn’t foreseen. Stephen knew having an emotional talk with me in public was a good idea because I wouldn’t get dramatic. As the conversation spiralled, I asked him point blank if he was in love with me. He deflected but I kept on him. Avoiding my eyes he relented, saying I wasn’t the person he wanted to spend the rest of his life with. I felt the sting of my tears before the right hook even connected. But maybe this was what I wanted. To be let out. Within a month we were done. Not even a full year since we’d met.

Late one evening in the days that followed, I called to check in. He told me he felt as if nobody cared. It’s the only time I remember hearing Stephen cry. I said, and meant it, if he needed me at anytime I’d be there. Then I told him I was getting dressed and coming over. He said not to, so I stayed home. I will always regret it.

As his eyesight began to fail, he moved to a town near where he had grown up. One of his long-time friends set him up with a desk job at his architectural firm. I saw Stephen one last time in September 1988, when I joined him as his assistant on a four-day photo shoot on Montauk. As luck would have it, we were coupled to share a motel room. Time to talk. Time to say goodbye.

On January 10, 1989, he turned thirty-three. The next day Stephen died. The funeral was a week later. At the eleventh hour, wondering where I was, Stephen’s friends realized that no one had let me know the news. One of those situations where each thought someone else had contacted me. I received the call on a Sunday afternoon while I was at work. The memorial was the next day in a Boston suburb.

Monday morning there was a car accident on the expressway. I missed the shuttle. I caught the next plane, landed at Logan, and hailed a cab driven by a foreigner that wasn’t familiar with the area. I missed the funeral. I stayed for the burial and spent some time with Stephen’s family in the house where he was raised before I headed back to New York. Once home, I booked a ticket and flew to an island, taking with me a paperback copy of Time and Again and the Anita Baker CD Giving You the Best That I Got.

First, Stephen’s obituary, written by his family, stated that he died of cancer.

Second, Stephen believed God was punishing him for being gay. I know this for a fact because he told me so. I can still feel the heat of fury when I think about it. I said something to him like “if that were true, God would have knocked me off a long time ago.”

The trajectory of my life was forever altered by Stephen’s illness and death. We didn’t stand long enough for me to really know if he was in fact “the one.” I have to live with that. Harder to reconcile is that Stephen didn’t want to be gay. He wouldn’t meet my family. Before me, he’d had two relationships with men, both lasting two years before each settled into a platonic friendship, something I threatened he would not get away with with me. He had said that in the future he wanted to marry (a woman) and have children. When Stephen told me that he didn’t want to spend the rest of his life with me, I took it at face value. A decade or more removed I began to reason that there could have been more than one way to hear that. Maybe he really didn’t love me. Or maybe in wanting not to be gay he still intended to find a wife, no matter how he felt about me. Or maybe I should have considered that he was just told he was going to die.

I can picture the night we met. It was not some epic romantic stage; still it was privately the climax of my two years of staring at him from afar. There he stood at one thirty in the morning in an emptying bar. I was shy to approach and afraid of rejection. If it didn’t go well it would be done before it was cast. To my surprise he walked over and offered to buy me a drink.

There was no deep connected conversation over vodka rocks, and in an awkward silence I felt the exaggerated letdown. Then he asked me to go home with him. Without hesitation I followed. Still, I was a realist. This was just about sex. I was a good-looking young man, but Stephen was on a level of beauty that attracted the most gorgeous men in a city of beautiful people. But something happened that first night while in bed, something I said to him that I think placed me in a different light. As the sex got dangerous, I pulled back and asked Stephen if he had condoms. He said yes. I sat up and said, What is wrong with you? You have no idea who I’ve been with! He reached into the bedside drawer, placed a small sealed wrapper in the palm of my hand, and with eyes wide open, kissed my mouth.

He phoned me the following Monday to ask me for a date. And the world changed. 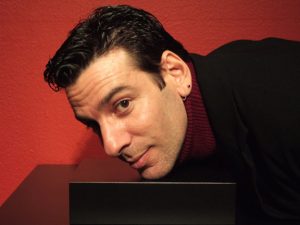 Andrew Sarewitz was born in South Orange, NJ, moved to New York City at eighteen, and never left. At seventeen, he received a letter of commendation (a level below honorable mention) from the Second Annual American Song Festival competition for music and lyrics. His published work includes My Father and Project Gus; currently he is adapting a script from the 2006 Off-Broadway musical SHOUT! The Mod Musical for series television. Andrew credits his initial appreciation of literature and storytelling to Ludwig Bemelmans and his love of words to Joni Mitchell.