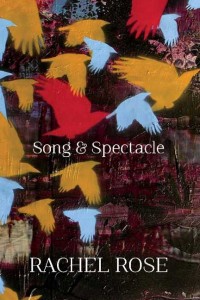 In her third book of poetry, Rachel Rose delivers a collection soaked in maternal feeling  and all things archetypically female — oceans, milky universes, blood, burial. The language is deceptively straight-forward, and many of the poems end with tidy couplets that seem to ‘sum up’ the meaning, like the morals of Aesop’s fables. This effect is heightened by the song-like rhymes you can find in so many of these couplets:

. . . we ask for a generous span of beats.
We pray when you stop, you stop
in our sleep.

Or:
This is my prayer:
Let me die first.
So you are blessed and so you are cursed.

Every poem is written from the first person point of view, which isn’t such an unusual thing for poetry, except sometimes this “person” is the Sea, or Death, or the Heart, or the Universe.  This creates an intimacy which further adds to this maternal tone, reminding me of a bed-time story or a lullaby. These are the kinds of poems you can read once and feel like you “get it.” But maybe they are like riddles, too.

The Universe, as Rose conceives it, is not as simple as it first appears. The powerful resolution found in so many of these poems is disrupted by a kind of call and response form to the collection. The poem “What We Heard About Rain” is answered — or contradicted — by “Rain Song”; “What We Heard About the Universe” by “What the Universe Perhaps Heard.” So while each poem, individually, sounds certain of itself, the call and response form suggests an uncertainty – that, through the act of writing poetry, Rose is only  exploring the truths of these points of view.

What I would consider one of the boldest of these duets is “What We Heard About Abortionists” and its response, “Inside.” You can probably guess the content of the first poem, where abortionists are characterised as a kind of saviour:

. . . But without you, women die,
infected inside. You do your job,

Rose alludes to what the average Westerner might consider an abuse of this reproductive right, but our compassion remains with the abortionists and women in the final lines:

unwelcome, uninvited guest, who, until

evicted, the room remade, blood quilt shed, plush
drapes drawn, has made them sick at heart. 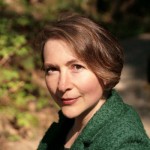 But it is the answer to this poem that really strikes me, where Rose assumes the voice of the fetus. Given the recent controversy in Canada over the proposed redefinition of a human person, assuming the voice of a fetus could sound like an anti-choice/pro-life manipulation.  We might think, “No! No! What are you doing?!” But Rose doesn’t shy away from this. Given the profound compassion she expresses in so many of her poems, including “What We Heard About Abortionists,” I doubt if Rose would ever judge a woman for choosing an abortion. And Rose explores the voice of the Sea, Death, the Universe – she is unafraid to assume the voice of anyone or anything. Of course, that is not to say this poem is without its references to specific earthly political issues:

She has no room for a girl with a hole in her heart,
a thick tongue. I was going to die anyway.

I was perfectly healthy, but not according to tests.
I was unwanted, as is her constitutional right.

These couplets point directly to ethical concerns around amniocentesis. But if a poet is going to explore, conceptually, the conscience of a fetus, she can’t simply ignore certain realities to avoid controversy, can she?

I am pro-choice. Although I have my suspicions, I really have no idea where Rose stands on this (maybe in perpetual exploration?). So all that aside, I’m impressed with her courage on this one.  And here’s a few lines from that poem that I loved just because they are beautiful:

Toes, yes. I have ten. Fingers translucent
as mushrooms in rain. They drift

like seaweed, trace my cheek.
I was dead before I could speak.

One of the most powerful poems in this collection is the third in a series, “Maternal Sapphics III.” Rose explores her experiences as a lesbian mother, and this complex dynamic of nonbiological motherhood:

I do not love being left out here. No, I am not
supposed to say it, but sometimes I am the unwanted
unpaid babysitter, the rejected mother, the un-
biological.

This is what is so great about Rachel Rose — her bravery in saying what she is “not supposed to say,” and the conflicted questions and answers she leaves us with:

What am I to him? I’m a different song,
song of longing, song
of not belonging.

Song & Spectacle is a collection of contradictions, where life and death, love and indifference, care and neglect, and knowing and not knowing bump against each other. There is never an answer although every poem tries to offer one. For lovers of the lyrical, melodious sort, or those interested in the joys, sadnesses and undefinable experiences of motherhood, I would certainly recommend this collection.

If you have something to add, please share you comments below!