The bench is moist from my sweat. I push my right knee down on its centre, left leg anchoring my body to the floor. My fingers grip the dumbbell as I methodically begin pulling the 50lbs up and down, my bicep flexes and tears, each pump tightening the slight curve of my inner thigh. The rhythm of dumbbell curls focuses my mind, keeps me rooted in the present.

Today I am here with Rachel, a friend and personal trainer, who gently prods my progress onward, one weight and one muscle at a time. I feel strong and enjoy the flex of my back muscles in the mirror.

Today I am here instead of drinking under my duvet cover.

Rachel now has me doing chin ups. We’ve been discussing our weekend plans as I lift my body up and down. If only it were this easy to lift my mother, plant her in a more nurturing soil, give her the happiness that seems to evade her.

Last night I met my uncle, on the anniversary of a friend’s death. She would have liked it, stayed up all night going over the story until it made more sense, until it settled deep into the part of me I can’t remove. Bone deep, heart deep.

A focus so deep it would exude nothing but love.

My mother is 52 and met her baby brother again for the first time since she was four. On bad nights when I was a child, sitting next to her with blankets covering our laps, she whispered about him, her only sibling somewhere out there in the world living a life without her. She was never truly living without him, always the splendid hopeful shadow of a sibling’s aura around her.

Over a year ago, in Alberta, he found her after a long sequence of contacting all the wrong people. He lives in British Columbia, so for the last ten years they have been geographically closer than ever. I wasn’t able to see them finally meet after such a sad long time. I imagine him arriving with his husband, my mother finally seeing something of herself in another, a stupor of awkward love. But I’m projecting.

And I’ve jumped too far ahead.

For a good part of my childhood I thought my mother had no family, that she dropped out of the sky, a burst of starlight with no way to trace her origins. And like a visitor from space she had keepsakes, photos, and spoke of someone left behind, yearning to eventually return.

I should start with the Trent River, of what would make a man, my grandfather, tell his family that his daughter drowned in it instead of the truth: his children were taken and placed in foster care. Her brother, two years old and eventually adopted. She, four years old and wondering where her grandparents and aunt were. I should always start with how a family believes such a loose lie without proof.

The first time I thought to ask my mother where her parents were, she told me she was taken away from them, that they had done something bad. Over the following years after asking, she recounted, in fragmented pieces, how she was left with neighbours for months at a time while her parents disappeared down the necks of bottles. Sometimes she was left with a great aunt that she adored. She would’ve kept my mother if given the option, if she had been told where she really was. I don’t know what the final incident was that landed her in foster care, what was more awful than all of what she had already told me. I know it’s bad, the kind of bad most wouldn’t want to know. Also, it is not entirely my story to tell, even though my mother has given me permission to say what I want, when I need to.

Surely her story is my story, they bleed into each other. That’s always the way it is with my mother—I can’t tell where she ends and I begin.

The trap bar holds more weight than I’ve lifted since before my concussion. I’m getting to where I once was, my back straight, legs sturdy like my grandmother’s as she carries laundry up the basement steps. Lifting and dropping the menace in my blood. Tonight I will not drink, tonight I will write. Tonight I will be someone my niece would be proud of.

My first boyfriend bought me guinea pigs when I was in high school. He had just gotten a job dishwashing in, what I thought was, a swanky restaurant. It was a nice gesture, but odd. Gifting a living thing always make me anxious. Another being to care for, another thing to keep alive. It was hard enough to keep myself going.

The first night we had them, they would not stop squealing that noise only guinea pigs can make. Every swish of a plastic bag, every groan of a mattress spring in our small granny flat set them off. Eventually I took the cage and sat with them on our small front lawn. Waves yawned and crashed onto the beach around the corner; Lake Ontario, our ocean, swelled large and blew its cool breath over the town. The grass held the damp and I felt calm as the pigs ceased their protests. I didn’t blame them, only a few weeks old and placed in our noisy home.

I was so focused I didn’t hear my mother come outside. She cradled a head of iceberg lettuce beneath her breast. Poor buggers, what are you in for with us? She sat close to me, our damp summer knees connecting. The slim movements of her fingers always fascinated me, loose rings shifting between knuckles, skin rippled up around her nails from her nervous picking. I wanted to have her hands, I wanted to look and be more like her. Instead I was the spitting image of my dad.

I had a guinea pig once. Her dainty hands lifted the black and orange spotted pig from his cage, the one we named Stogie. With practiced moves she tucked his tiny body beneath her chin. I kept him in my bed most of the time. When my father came into the room, she was quiet, quieter than any animal ever is. Good thing too, or he would have drowned her like he did my cat.

This revelation didn’t shock me. I was desensitized; the year leading up to this was spent in court rooms listening to judges recite the violent deeds of my brothers. It’s hard to panic when sinking if everyone else around you is already circling the drain.

They’re yours if you want, I said. Let it be known: I was sad most of the time and my mother’s sadness tore me to pieces. I could withstand more than most, but not the reality of her grief.

Her face pinched in on itself and she thrust Stogie into my hands, No these are yours. I don’t want them.

I was too busy seeing her, I forgot how to see myself.

The fictions I created about my uncle now surprise me when I think back on them. He was adopted, he escaped, right? I imagined him tall, blond, and athletic, with a beautiful family. He was a doctor or veterinarian; someone I could be proud to claim. This absolved his absence from our lives, for a while. He was a name that did not answer back, the echo of our own voices scattershot through the years.

Often I wonder if this loss is why my mother had five children. Together, we raised her babies, each imperfect, troubled beings: food bank trips, pushing our laundry across town in a stroller to the laundromat, every late bill, and every hurried call to the local police. With so few people to trust, how could she convince us to trust her, or ourselves? Meanwhile, my father maintained that this many children wasn’t really his choice.

I wasn’t adopted out. I worked and saved, won a scholarship and escaped to school. I left her. I left my siblings with what I could not deal with. I ran, in a different way.

The bar above me strains my shoulders as I lift. As I set the bar down, I tell Rachel my little sister finished her GED at twenty-three. I’m proud even though we don’t talk. Sometimes we just take longer to get where we’re going.

Phone in hand, I look and look, turning myself inside out, worried about my flat greasy hair. The screen reads Connecting, I’m an hour late, sipping the air so I don’t gulp. My mother answers, crown of blond curls, smiling like I forgot she could. My greeting stumbles, she is pointing the camera at him, my uncle, so tall, so like my golden mother. It sings in my blood. The screen shakes, my uncle beside his husband, my mother excitedly yipping, Say hello, that’s your uncle! 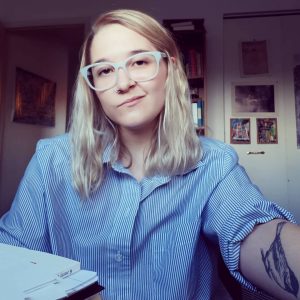 Ashley-Elizabeth Best is from Kingston, ON. Her work has appeared, or is forthcoming in CV2, Ambit Magazine, The Literary Review of Canada, The Columbia Review, Glasgow Review of Books, and Vallum Magazine. In 2015 she was a finalist for the Robert Kroetsch Award for Innovative Poetry, and her debut collection of poetry was published with ECW Press.