Bright and fluid music softened Harriet as she emerged, three weeks ago, from Bloor-Yonge station into the pupil-sting of day. She ascended the subway steps and turned the corner to encounter three violinists, a cellist, and a percussionist whose snap-tap-tap snare rhythm bounced off the highrises. She wanted to take a picture of the players but knew if she did she should probably drop coins into the hungry mouth of the cello case. The quintet chose to prop the cello case open instead of a violin pod. Ambitious, but then again, Harriet had never seen a curbside quintet before.

Today when she emerges from Bloor-Yonge, there are no strings, no snap-tap-tap, nothing but shiny silver water pouring down chrome and glass, soaking into the grubby sidewalk.

The Tim Hortons on the fringe of Toronto’s financial district is not busy at five in the afternoon. This is where Harriet is to meet up with the dog walker she has been seeing. The sky is spitting sleet. Harriet is wearing a toque, and the dog walker is wearing a puffy jacket, all coziness. His damp hair is in his eyes and he never flicks it away and this is unsettling. Harriet wraps her fingers, one at a time, around her red paper cup. The dog walker is staring at her and she can feel his eyes and she can feel his love and she struggles to bounce it back. Harriet’s best friend Thea once accused her of treating men cruelly because she thinks she can’t hurt them. Water collects on the windows of the Tim Hortons. There is no place she would rather have met him today. Fancier places will serve less fancy days, but today she has already trekked through the financial district and that was enough.

Harriet wishes she was wearing fingerless gloves. She used to knit fingerless gloves again and again. The fingerless glove pattern forgoes complication. Uselessly perfect for a soaked five p.m. date in a Tim’s. She pats her fingers against the side of the cup to the sound of an imaginary snare.

She laughs instead of answering and picks at the roll-up-to-win rim. He doesn’t say a thing so she says, “I haven’t even looked at the full text. I don’t care.”

“You think that’s okay?” He says it with kindness. She wants to spill her coffee out across the table, see the sheen of brown wet instead of water wet, the smell of it, the rise of steam.

“I don’t know that I owe him anything.”

“No,” he says. But the way he says it, almost a question, makes it sound like she owes everyone something, like everyone owes everyone the utmost kindness they have in them. She can almost hear him say, kindness is free. She knows that he believes that. He doesn’t understand.

Harriet is ambitious. She wants the open cello case, not the violin.

Take pictures of the lights in bars. They have a residue in the afterimage. Focus. Blur. Make the blots of light appear as many. She is with you. Puff on the joint as you zip your coat then pass it back. Look both ways for streetcars. Cross, cross, cross. The snow is more wet than you’d like and everything smells like brake dust and marijuana. Your coat comes up high, tight against your throat when you swallow. Together you dance in the unlit doorways of bookstores in the smoke and condensation of your breath. You could stay outside forever.

Here is the full story: Harriet’s best friend Thea introduced Harriet to a photographer who would pay real money for naked pictures. Not sexual, just naked. Making tea in the buff. Reading a book in your birthday suit. Cleaning the bathroom mirror, nude. Thea had not known that the photographer would ask Harriet to pose for him, but ask he did, right there outside the bathroom in the bar with the chandelier lights and the sticky floors. Harriet agreed. One week later she let him take four pictures while she sat at her desk, gooseflesh on display, at a price of twenty bucks a snap. And then they had sex. It seemed like the thing to do. She was already naked and freshly in possession of eighty dollars, after all.

In the puckering light of a smudged-windowpane sunset she told the photographer her deepest secret. Something about a hamster forgotten in a hamster ball when she was eleven. Something about the pain of starvation that she felt in her dreams for years afterward. He told her what he claimed was his deepest secret: a fantasy about knocking up a girl with curly hair. Sometimes the specifics are what make a statement uncomfortable.

Harriet told Thea about what happened with the photographer on the subway ride home after a night drinking under yellow lights in a red bar that had “Snack” in the name. Thea was grossed out and glorious in the way she rolled her eyes and wrists at the same time, ritualistic. She held her liquor with a steadfast poise: her spine straightened while the rest of the world slumped around her. The rest of the world always seemed to be slumping around Thea.

“Him?” Thea asked, straightening every vertical bone. “Him? Really?”

“He wants to knock up a woman with curly hair.”

“This is making me sad in all of my bones,” Thea said. She stretched her arms out in front and her joints cracked with bone-sadness and the world slumped a little bit more. Thea spoke again: “Have you told your boyfriend?”

“We’re meeting at a Tim Hortons tomorrow. In the financial district.”

Once, Harriet had fallen asleep beside Thea in Thea’s bed. Thea had announced three days earlier that she was moving across the country at the end of the month. They had been out all night in the diesel-and-rain smell of Toronto, and Harriet did not want to pass out alone in her own apartment. Because Thea was Thea, she put on a Mary Beard lecture about the Greeks. Harriet cannot recall another time she had fallen asleep so instantly, and instant sleep is bliss.

On the day that Harriet saw the quintet, she was on her way to dinner with friends. A group of artists who had a notion that if they ate enough sushi and drank enough cheap beer, the muses would come. “Slightly hungry, slightly buzzed, full digestion mode,” her musician friend Timothy said, “is the key.”

“To what? Sleepiness?” Harriet liked sushi and cheap beer and her friends, but she didn’t understand why they couldn’t call the outing what it was: a time to complain about scarcity of money and time and resources and apartments. A time to endlessly flirt with each other despite fishy breath and rice in their molars. Thea was there with a ribbon tied around her head. The ribbon had little rabbits running across it and Harriet thought about her childhood hamster.

Harriet and Thea stayed out later than all of their friends and wobbled home across a bridge. Harriet held tight to a cow-shaped balloon that she had found on the street outside the sushi restaurant and was immediately endeared to. The cow had almond-shaped eyes and a green collar and little accordion-folded legs. Harriet cradled it under one arm and gestured with the other as she spoke.

When Thea and Harriet were outside of Harriet’s apartment, Thea gave the cow a goodnight kiss on the head.

“Of course not. It’s street garbage.”

“But you kissed it.”

And then Thea leaned towards Harriet, her hands hovering, and Harriet made the last-minute decision to turn her head. Thea planted a kiss on Harriet’s cheek. Harriet would regret that choice for weeks, if not months. She would keep the balloon cow until it was a deflated dust-motel in her closet. She would kiss it on the head and on the printed mouth.

Collect people with the strangest jobs. Recoil when they touch you. Laugh when they say I love you. Stare into the light so that your eyes don’t water and won’t betray how much the words take hold of your throat like a too-tight coat. They aren’t her. She left three months ago and now there are streets in Toronto you can’t go to because the absence feels like starving. And why? You never said the things you needed to say, but you won’t make that mistake again. This is what it feels like to be left behind. Stay outside for what feels like forever.

The dog walker is afraid of being forgotten. He told Harriet this once as they sat on a bench along the University of Toronto’s Philosopher’s Walk—a straight-shot path along the campus with a name that, to Harriet, begged deep conversation. In homage to their location, she had asked the dog walker what he was most afraid of and he hadn’t even needed a moment to think. “Being forgotten feels like starving,” he said. (She has never told him her secret but it is sometimes like he knows it anyway.)

This is why, in a Tim Hortons in the heart of the financial district, he asks Harriet if she has texted the photographer back. But Harriet doesn’t owe the photographer her time or her energy or her care. This is the mark of the way Harriet leaves people. Quietly and quickly and without looking back. I don’t owe you anything. The dog walker is right to be concerned.

There is hair in his eyes and he still won’t flick it away and it’s unsettling. He is watching her with so much love in this Tim Hortons and the rain is everywhere. She knows she won’t call him again and the guilt is something low and grumbling, like steady hunger. But Harriet knows from experience that steady hunger will shift into the irregular burn of craving and then one day will only prickle the nape of her neck when someone needs more from her than she can give. No one will starve because people aren’t hamsters. Harriet is not responsible for him and for as long as she thinks this way, the world will not slump around her. Is she treating him cruelly? She straightens her spine. She rolls up the rim. Try again next time; next time she will be better. A damp woman with a cello case strapped to her back walks into the Tim Hortons, orders three maple glazed donuts, and sits down at the table next to the door. Harriet slides her a twenty-dollar bill as she leaves. 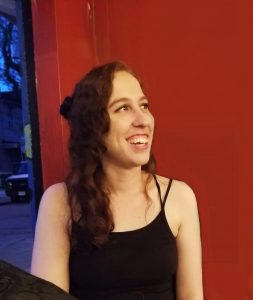 Kaitlin Ruether is an MFA Candidate at the University of Guelph in Tkaronto/Toronto. She is the current fiction editor at Leopardskin & Limes, a regular contributor to Exclaim! magazine, and her fiction has appeared in Lost Balloon Magazine, The New Limestone Review, Freefall, and elsewhere.