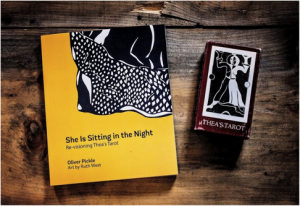 Through experience in the Montreal arts and literature scene, and with collectives such as Queer Between the Covers, the press’s operators, Ashley Fortier and Oliver Pickle, have identified an English-language gap in queer zine and book culture in the city.

The press seeks to directly address this, describing themselves as:

… a two-person operation based in Montreal. A small press looking to produce literary fiction and nonfiction with a queer and feminist bent. We are excited about new and emerging writers and giving them a chance to get their work out there, particularly if they’re doing or saying something different than what people expect of them …

The first project for the press, She Is Sitting in the Night, draws on both second-wave feminist alternative presses and past queer creative cultural production for direct inspiration: She is Sitting in the Night is a re-visioning of Ruth West’s 1980s tarot card deck Thea’s tarot, with updated and lengthier card descriptions that blend queer and feminist philosophies in the contemporary text penned by Pickle, an experienced tarot reader. The book came into being as Rima, friend of Metonymy Press, encountered the original series of cards and proposed to both West, the deck’s illustrator, and Pickle a renewed and re-visioned version of the deck.

Tarot decks have traditionally been used in order to make clear present circumstances and present us with possible readings of the future. The deck is a perfect first project for Metonymy—blending updated queer and feminist wisdom with energetic potential for future publications—a first project that reaches through space and time, generations and personalities.

Fortier and Pickle are passionate in their desire to be accountable to the readership that they want to develop through the publication of English-language queer authors. The press looks to present marginalized voices, to reach out to the readers in Canada who are looking for  those voices to reflect their experiences, or to illuminate a different perspective.

The activist era of the second-wave feminist, lesbian, gay movements helped to established publishing houses from the mid-century onwards, and contemporary incarnations of alternative presses (such as Arsenal Pulp Press in Vancouver, BC, and the City University of New York–affiliated Feminist Press) work to incorporate an intergenerational and intersectional dynamic in independent publishing.

Metonymy seeks to incorporate and activate a readership’s dialogue with the press process, engineering similar frameworks of accessibility with open-call submissions for fiction and non-fiction works, which details its commitment  to emergent writers with such queer qualifications as experiential knowledge or feminist and queer social justice work, rather than an established, or previously published, presence.

Metonymy emerges as a new publishing venture that makes explicit its heritage and new take on queer culture, continuing the work of historical independent queer publishing that was able to provide a venue for experimental and emerging artists who were unable to work within the mainstream press or sought to work outside of it.

Metonymy Press is revisiting works from the past in order to begin reaching towards a creative future. Like tarot, Metonymy recognizes the past as formative and present in our ideas, creative potential, and actions. Revisiting works from our collective past in order to reach towards creative potential and future success is a beguiling possibility, presenting us with options, icons, and interpretations for our alternate imaginings and wildest dreams.

Metonymy wants to publish YOUR work!