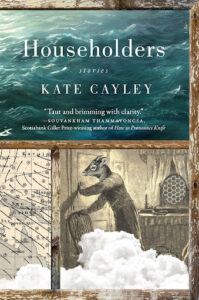 An exceptional volume of stories, Householders warrants applause—and readers, of course. Following How You Were Born (2014), Toronto’s Kate Cayley showcases virtuosic writing and captivating settings alongside intriguing plots that are handled with marked assurance from beginning to end.

More than reflecting sheer invention or technical mastery, the stories are anchored by multi-faceted characters reacting to or navigating unique practical and ethical dilemmas, which Cayley investigates with a thoughtful thoroughness. In “A Beautiful Bare Room,” for example, Cayley depicts panicked characters getting by in the terminal hours of humanity. In this Faustian narrative, Cayley traces the strange fate of a woman named Liza, who “had not thought of herself as a person who would end up in a bunker.” Self-preservation in mind, she chooses to leave behind a girlfriend during a catastrophic crisis in order to save her own skin. As for a wealthy stranger’s offer to have her join his literally bunkered enclave of affluence in California? It has a few strings.

The situations Cayley envisions usher in her readers; often both weird and unexpected, they’re also provocative and emotionally resonant. As far as what any one story can accomplish in fifteen or twenty pages, all nine in Householders merit attention for being as good—involving, pensive, smart—as stories get.

In “Pilgrims,” an atheistic woman in a desolate mobile home halfheartedly cares for Nickel, a young man profoundly disabled by an accident. The woman adopts the persona of Sister Bernadette for her sensationalistic blog—where (while wearing a homemade nun’s cowl) she fabricates Bernadette’s history, supposed spiritual thinking, and, of course, financial hardships.

“Doc,” set in 1973, captures the ethical quandaries of an aspiring poet sent to Texas by his closeted half-brother. Paid to watch over an alcoholic folk singer with writer’s block and a death wish, he’s soon in over his head.

A quartet of linked stories—“The Other Kingdom,” “Householders,” “Travellers,” “Piss and Straw”—relate the eccentric trajectories of Carol and Naomi (and, subsequently, Trout and Strawberry) from Toronto and a paltry commune in Maine named the Other Kingdom to Toronto and, thirty five years later, to Maine once more.

Even seemingly ordinary situations—marriage and motherhood in “The Crooked Man,” an awkward university friendship between two students in “Handful of Dust”—are made beguiling but deeply appealing under Cayley’s tutelage.

Brilliant nonpareil characterization and arresting premises aside, Cayley’s writing—the precise craft of her sentences—never fails to impress. She’s meaty, a writer’s writer, but an enchanting whiz with words as well. Her descriptive terms—a character’s “modest, frozen life,” the burden of a mother with a “barbed child” or the “blunt, ungrammatical” words of a religious pamphlet—are lovely and evocative. When being economical, Cayley can easily command attention with pithy single-sentence character portraits: “My poems were loose, unspooling, and about myself”; “He was skinny and regal, a deposed king who refused to acknowledge his fall”; “Doc was such a mess by then that he only played dive bars, forgot his own lyrics, leapt off the stage to fight hecklers.”

It’s writing that’s not designed to be sped through, but rather to be relished. This is particularly true with the lengthier sentences Cayley regularly sets on her pages:

“The young men wore vests and ties, the women long cotton or woolen skirts, their hair brusquely pulled back, striving for the haven of middle age, though their cheeks and foreheads were still pocked with acne.”

“Trout and Strawberry had been born in the same week, in the same commune, into a world that smelled of mildew and dope, of compost and rubber boots, wet wool and sacks of weevilled flour, still used for bread, money being meagre.”

“Even though Martha and Denton bought their house through an estate sale, a leaking and rotting shell of a place, even though Denton worked over every inch of it himself while they lived with his mother and Martha nursed Sam, the second of her babies, and felt sidelined and useless, the down payment was a gift from her grandmother and she knows that, however uneasy it makes her, she still falls firmly on the side of the radiant houses and the energetic educated people, who don’t clip coupons even though they are daunted by the price of groceries.”

The portraiture—detail, implication, mood, context—is utterly expert; the fact that these excerpts are only a few lines of stories that take up two dozen additional pages lets any reader know that Cayley’s stories are an investment of time and focus. That’s not a criticism but a declaration that perhaps Householders isn’t the best pick for sun, sand, or transit.

The stories centred on Carol, Naomi, and Trout are moving; and they’re wonderful. They begin with a road trip by mismatched university students (Nancy, soon renamed Naomi, seeks “incandescence”; strait-laced Carol is troubled by a forbidden love for her friend). Smitten by grizzled John, the commune’s visionary leader, Naomi remains, and Carol, less impressed, re-crosses the border to begin a “more settled, more decided” life. By the 1980s, when Naomi flees the commune (with her conflicted daughter Trout in tow) and reconnects with Carol, the women and society have changed irrevocably. By the fourth story, when Trout returns to Maine days before the borders close in response to the pandemic, this time her senile mother is the passenger. Taken together, the stories explore the fallout from historical moments—‘60s idealism through to ‘80s careerism and winding up at whatever North American’s current “ism” happens to be—and from free will: Nancy’s impulsive decision at 17 to reject middle-class comforts is still playing out when her daughter shows up at the Other Kingdom thirty-five years later.

I won’t claim those four stand out as the best stories of Cayley’s collection (they’re all superb, to my eye), but they drew me in the furthest. They’re an achievement any writer would be proud to associate with their name.

A figure beset by challenges—from others, from their own limitations, from the unfathomably complicated outside world—is one definition of a short story. The nine permutations of that model in Householders illustrate how much can be made from character, setting, and plot. Cayley’s mothers, lovers, questers, and rule-breakers—her skeptical, questioning journeyers—mesmerize with their missteps and fateful choices. 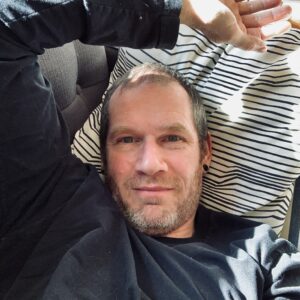 Brett Josef Grubisic resides on Salt Spring Island with his partner and two cats. He’s the author of five novels, including The Age of Cities, From Up River and For One Night Only, and My Two-Faced Luck.