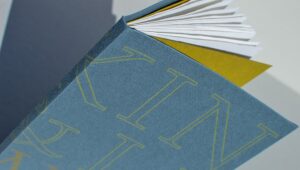 Samantha Sternberg was born under a waxing gibbous moon. Her poems have appeared in journals including The Malahat Review, Room, Prairie Fire, The Mackinac, and Plenitude (“Labour,” from October 2020), as well as in the anthology The City Series #5 – Halifax (Frog Hollow Press). Her first chapbook, Kinship and Light: the Wyeth Poems, was published by Greenboathouse Press in 2018. She lives in Kjipuktuk (Halifax, Nova Scotia).

Sternberg is currently working on a full-length collection exploring familial ties, the notion of home, and her own identity as the descendant of eastern European Jews. A selection from this work, Listening Year, will be published as a chapbook by Gaspereau Press in the late winter of 2022. Deeply attuned to the complexities of language and the responsibility (and gift) of listening, the poems in this chapbook are spoken in different voices, and span decades and continents. A series of narrative lyric poems, Listening Year considers the trauma of genocide and displacement, as well as the possibilities for memory and memorializing among survivors and descendants. 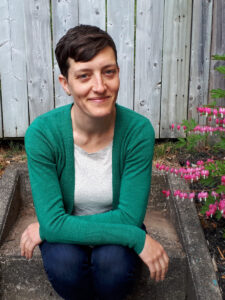 Annick: I love the title of your new chapbook, Listening Year. The first thing I wondered when I saw it was whether you intended a play on your first name, Samantha, which means “listens well.” What drew you to pick this title?

Samantha: These poems are a selection from a larger body of work, and they centre on the voices of others. I was playing around, seeking a title; I tried the frame of a year because I wrote these poems during a sabbatical from my job. I wanted to acknowledge that I was not the only one engaged in the work of creating these poems—I was a receiver and translator of stories. I also liked the sound of the title—the way it shadows listening ear. I didn’t immediately notice the link to my name, but once I did, that reinforced the rightness for me.

In addition to this question of listening, there’s a consistent attention to (foreign) language(s) and communication in your poems, many of which take place in the past. How do you see the role of these themes in your chapbook? And how do you conceive of speaking to the dead, to past generations? Toyour ancestors, and others?

I think I’m often writing about communication, and researching my family has only served to deepen this work and expand the ways it shows up—my grandparents and their children spoke several languages out of necessity, across multiple alphabets; their ability to communicate, and the names they used, were impacted by power and history. Even if everyone I wanted to speak to was still alive, how would we communicate; what would we understand of each other? There was freedom in considering this; I knew there wasn’t going to be a single way, and I chose to trust that there was meaning in the pieces I found. I also attended a writing workshop with Catherine Hernandez that year that helped me connect with my ancestors. The serendipity of it was amazing. The listening and trusting show up especially in the variation of voices and tones. I also focused on landscapes and sensory experiences as communication pathways, so those details recur throughout.

I definitely noticed these details in your work; you appeal to multiple senses in very specific, vivid ways. This brings me to my next question: Can you tell me more about how you approached this project? I ask because I know that you had planned to travel to eastern Europe during the sabbatical you mentioned to research your ancestry. Of course, the pandemic prevented you from doing so. Still, this ancestry is at the heart of your work. I’m wondering how you chose to adapt your project considering these new circumstances.

Yes, it’s true. So I travelled in the ways I could—through documentaries, phone calls, stories, hyperlinked portals. A cousin connected me to a family member I’d never met who had done a lot of research, and I came to feel lucky that I hadn’t travelled before speaking with her. I had to shift away from what I might have discovered in the forests, streets, and archives of my ancestors’ homes, toward fragments stretched into scenes and questions. And the idea of home intensified as all of this research took place within the pandemic.

You’ve mentioned one of the central challenges to a project like this: “Even if everyone I wanted to speak to was still alive, how would we communicate; what would we understand of each other?” Would you say that your poetry, in some way, is an act of communicating with the deceased?

I hadn’t thought to describe it that way, but certainly in these poems it is. As a way of listening across time—to sense who has come before and how they’re near me now. Because there were stories I knew I was missing, and no one else to ask.

There’s a kind of powerful capacity in the contemporary poet, who can identify what’s missing in various accounts of the past, to ask these questions, and then to approximate what might fill in the blanks left behind. You’ve already addressed the role that research played in this project, and now I’m wondering—would you liken your approach to documentary poetics, as practiced, for example, by C.D. Wright?

I like how you’ve captured that. This work certainly tries to fill in blank spaces. And I did read C.D. Wright’s One with Others and Don Mee Choi’s DMZ Colony along the way. I was particularly moved by Choi’s work—and inspired by the translations. And yet in my case, some of the reference points were not real. Early on I spent time looking for family records, and I was often unsuccessful. Eventually I paused to consider more carefully what I was looking for. Some of these poems are responses to that question. In fact, earlier versions of “Chavruta Prayer” and “9th of Tishrei, 5719” were formatted like archival records. So there is definitely a spirit of documentary poetics in this project, but I think the emphasis is on spirit.

One stylistic choice that stands out to me in many of your poems is the way you sew together seemingly distinct reflections and descriptions. I think, for example, of “Toronto, 1949,” which seems to collapse the space among a series of thoughts. Do you deliberately set out to structure poems this way, or is this something you do intuitively? Are there any forms you seek to replicate/approximate in poems like this, like the Persian ghazal? Or do you have other strategies for approaching a sort of progression through association, and sometimes associative leaps?

I came across the work of John Thompson as a young writer and his ghazals led me to learn about the form, which I found very resonant. Thinking through association is generative for me, and ghazals helped me leap further. I like to bring together moments/objects/perspectives to reveal new connections—and leave space for the unknown. Then comes the work of distinguishing between play and writing headed towards readiness. Sometimes I start with a form, more often I have a few things that guide me—a phrase, an image, a feeling, a question.

It’s funny—I was going to ask where a poem starts for you, but you’ve just answered that question. I’ll ask then if, as a poet, you’d say you’re guided more by images or sounds? Or something else?

More consciously by images. An early project of mine was an ekphrastic series inspired by Andrew Wyeth’s paintings. I received a book of his work by chance from a neighbour moving away. Looking at those images, some sort of knowing landed in me. Maybe too I’m thinking of the ways visual art influences writing because I’ve just finished reading a novel by Ali Smith. For me, I felt a surprising clarity when translating Wyeth’s images into poems—which is not to say that all of the poems were good, but I could trust what I sensed. And that trust has stayed with me.

I’m curious to know what novel by Ali Smith you just read, and what about the book moved you.

I’m reading Ali Smith’s seasonal quartet, following the calendar. I started with Autumn and I’ve just finished Winter. I love how the books move and stretch and welcome the unexpected—lots of leaping, room for the reader to enter. And in both books, an artist and her works serve as nodes across characters’ lives, and I enjoy seeing the impacts and connections of art on the everyday.

Another question about writing poetry in general: Do you think a lot about line breaks when you write poetry? If so, how do you decide where to insert a line break?

My line breaks are initially guided by rhythm and motion (though motion is inevitably constrained by the size of the page, which for me starts on paper). Later—once I’m ready to type a poem up—I go back to see if there are opportunities to expand or strengthen meaning with different line breaks. There’s also a visual component to the work. What shape does the poem want to take? Sometimes I rewrite a poem several ways with lines broken in new places to see what happens. But that play is about line length as much as it’s about line breaks.

This is a chapbook you’re publishing (your second, after the one about Andrew Wyeth, Kinship & Light, which was put out by Greenboathouse Press in 2018), but you’ve mentioned that the poems come from a full-length collection. How did you go about selecting the poems for the chapbook? What are your hopes for the rest of the project?

The chapbook gathers glimpses of the people I was searching for, and those I found along the way. In a sense, it’s like a version of my acknowledgements pulled forward into the body of the work. The full collection—which I’m working to publish as well—reflects on ideas of home and family in a more contemporary and personal context.

I’m really excited for your full-length, and hope to see it out in the world soon.

On that note, towards the end of Listening Year, in the poem “Scales,” you write

When you are lost, look up.
The sky teaches us
how to hold on
and how to let go.

Would you say that writing this collection was a way for you to at once hold on and let go of something? Maybe this is true of writing in general?

Yes, I think so. There is certainly an aspect of letting go whenever writing is shared. But it’s true with this work on a deeper level for me. Writing this collection has broadened my sense of what’s available for me to hold on to, which makes letting go a little easier. 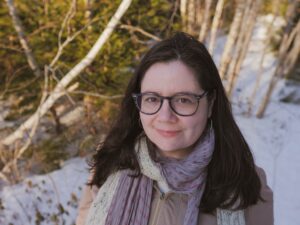