Lizards and Brokenhearts: Reading in the Teenage Wasteland 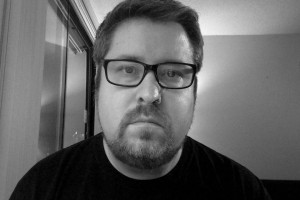 As a teenager, I was terrified of the letters HQ. That was the call number given to gay literature at the public library, with its murky koi pond and drug dealing after dark. I’ve since come to love those two letters in tandem—a few of my own books are shelved in that section now—but at seventeen, I felt nauseated the closer I got to that thin slice of writing. Barely a shelf, with nothing to separate it from the wider world save for the oddly colorful spine. My father and I went to the library once a week, and I can’t remember the precise moment when I began looking for that half-shelf. I discovered a book of essays by Paul Monette, The Last Watch of the Night. Not just gay literature, but new gay literature, was a scandal too enormous to contemplate in the blue plush window seat where I hid, reading. These were the allegedly “post-AIDS” years, when retroviral cocktails were promising an end to the plague, though everyone still remembered the legacy of AZT. Every cure was a pharmakon, which might easily kill you, depending on its mood. I knew these terms because I’d grown up with years of “safe” sex education, and because I watched the news like an overexcited cat, ready to change the channel and leap off the couch if I heard anyone coming down the stairs. 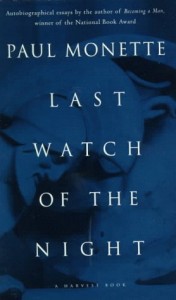 What is gay culture in a small town? I knew that the manager of the coffee house was gay, and that a female friend of the family was affectionately called Uncle. Terminology was never used, but we all seemed to step lightly around the truth, as if avoiding a floor covered in Christmas ornaments. My gay touchstones were few: Buddy Cole from Kids in the Hall; Leon, the brassy manager from Roseanne; Dear Uncle, who smoked a pipe and seemed to inhabit an entirely different world. Beverly Hills 90210 featured an HIV-positive character who died in a two-episode arc (he seemed healthy in the first hour). Queer as Folk the miniseries was still three years away, and internet pornography remained slow and unreliable. I remember losing my mind over a website called Outdoor Men, featuring nudes posing in groves. Simply the idea of a naked man was the most dangerous thing that I could think of. I’d fumbled in the dark, but it had seemed like a chaste activity, a more clinical exam than free-fall. Gay literature was a gateway drug, and I feared what it might teach me. As I stood in line to check out Monette, I felt exposed, an outdoor man. The whole town seemed to be pressing against the windows of the library.

I read Last Watch of the Night on a camping trip. I remember crouching over the fire pit, my jeans stained with soot, as I turned each page. Monette had died of AIDS a year earlier, and I was shattered by this knowledge, feeling that I’d narrowly missed the chance to occupy the same world as him. I was particularly moved by the collection’s opening essay, “Puck,” about a dog who survives two of Monette’s lovers. This canine survivance allows him to think of life in “dog years” as someone living, precariously, with AIDS, in an era that was pushing for his own erasure. He describes Puck’s insatiable sexuality, and how it produces an unexpected form of kinship: “His favorite sexual activity was to hump our knees as we lay in bed reading at night, barking insistently if we tried to ignore his throbbing need. We more or less took turns, Roger and I, propping our knees beneath the comforter so Puck could have his ride.”

I remember being enchanted by this scene of three lovers, two men and a dog, humping to life what Donna Haraway would call a “companion species.” The cruelty of being survived by a dog; the kindness of being mourned by one. 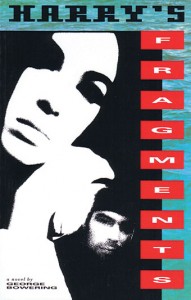 My undergraduate years were largely devoid of gay literature, aside from reading Angels in America for a class on drama. One notable exception was George Bowering’s Harry’s Fragments, which features a transgender romance in Bern, Switzerland. The class was more interested in Heraclitus and fire imagery than they were in the unexpected warmth of a trans academic, driving the narrative from within. In grad school, I was most affected by the writing of Nicole Brossard and Anne Carson, two writers with complex relationships to queer life. Carson is straight (however tenuously that term holds), but writes about dynamic queer characters in much of her work, including Autobiography of Red and Red Doc. I fell in love with her depiction of Geryon, a queer monster and “brokenheart” whose life is defined by the colour red. Brossard’s Mauve Desert, with its teenage heroine driving a Meteor across a desert landscape, convinced me to learn French so that I could read the original (along with the pathbreaking work of Marguerite Yourcenar). La Celestina, a decidedly queer Renaissance drama by Fernando de Rojas, would cast the same spell in Spanish, driving me to consume the work of writers both pre- and post-transition: Esther Tusquets, Juan Goytisolo, and Cuban writer Reinaldo Arenas, not to mention everything la movida. 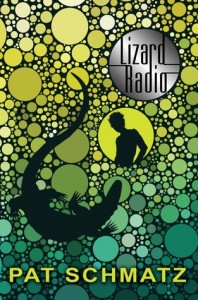 Most recently, I’ve been reading queer dystopian novels in the YA genre, where important work is being done on the relationship between class, gender, and ecology. Alex London’s Proxy features a black queer protagonist, a “chapter eleven” whose bankruptcy has forced him into the ultimate student loan: he receives corporal punishment for the crimes of his rich patron. The novel that’s impressed me the most in recent years is Lizard Radio, by Pat Schmatz, whose protagonist, Kivali, is non-binary and confined to a “gender camp.” Schmatz has said in interview that this is not technically a dystopia, since camps like these already exist. Kivali defines themself in nonhuman terms, opting for “lizard” as a term with more queer flexibility. Kivali approaches gender as a network of languages, none of which come close to expressing who they actually are: “Man and woman: they’re both familiar and foreign. Like beautiful pasture planets I travel in my dreams, speaking each language with a heavy accent.” Described first as a “bender,” Kivali comes to accept “lizard” as a nonbinary alternative, while discovering that the true purpose of the camp is to shore up an ecologically devastated world.

From a critical standpoint, Jose Esteban Muñoz, J. Halberstam, and Qwo Li Driskill have been touchstones, as well as Eve Sedgwick. I can scarcely accept that two of them are gone. As a lover of narrative poetry and what Carson calls the “novel in verse,” I’m also invigorated by the poetry of R.M. Vaughan, as well as Michael V. Smith’s recent memoir, My Body Is Yours. As I often remind my creative writing students, you’d be surprised with how much queerness you can get away with in a novel. My most recent series, Parallel Parks, featured four queer protagonists with nary a blink from the publisher, in spite of its inclusion of sex, drugs, and—perhaps worst of all—academia. Smoking is the only activity publishers have balked at: a teenage character shouldn’t smoke, but living with a vampire and a telepath is no problem at all. Perhaps it was the cigarette, that enduring lesbian signifier, that worried them. Like Puck humping the comforter, that smoke might leave a trace behind, however briefly.

A literature and creative writing prof at the University of Regina, Jes Battis is the author of the Occult Special Investigator series, set in Vancouver, as well as the Parallel Parks series, set in Regina. His first novel, Night Child, was shortlisted for the Sunburst Award for Excellence in Canadian Literature of the Fantastic. He’s working on a mystery novel, My Little Town, which focuses on pagan mythology.