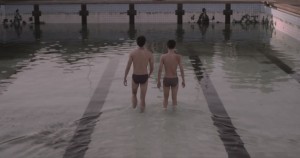 The Blue Hour is a hard film to sort into a genre. There’s a level of romance, but it’s certainly not a romantic movie. Maybe a very slow thriller, or a mostly pleasant horror? Actually, the closest thing to a genre that this feature from Thailand falls into is a Murakami novel: all vague symbolism, melancholic, alienated teenagers, and bizarre, unsettling magical realism.

Tam, a victim of physical abuse at the hands of his family and classmates, meets Phum, a mysterious teenage drifter, in an abandoned pool complex for a hookup. Phum explains that the place is haunted before the two fool around, but a close relationship develops. Tam’s fragile emotional state and illness mean reality begins to fall apart, toward a world where unseen spirits threaten—or aid?—the living.

For the first hour, you’d be forgiven for forgetting The Blue Hour was part of the “dark side of queer film” series. There’s nothing lighthearted about a victim of abuse, but at first the gorgeous cinematography depicts a burgeoning, wandering idyllic relationship in a practically post-apocalyptic urban landscape before slowly dipping into the horror elements. There’s little distinction between fantasy and reality as the film goes along. Tam has clearly been traumatized by his life as a longtime victim, and there are hints that part of this psychosis may stem from an unidentified illness.

This is one of the more unsettling aspects of the film: Tam and Phum inhabit an almost empty, haunted landscape, and seem mostly unfazed by the horrors around them, at least at first. Early on, Tam bashes in the head of a gun-wielding thug and seems frightened but not particularly bothered by the murder. This gives The Blue Hour the strange logic of a nightmare, where shadowy horrors make sense even though you can’t quite grasp why. 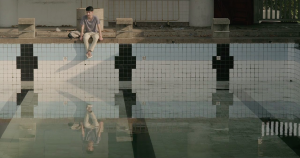 I suppose the important question is, is The Blue Hour good? The pace is slow and the horrors are introduced just as slowly, but any faster and they would probably seem ridiculous. The film kept me watching, wanting to know what the resolution would be, but I imagine the slow pace will frustrate audiences, and they will probably feel disappointed if they watch for a resolution. The Blue Hour is in turns gorgeous, creepy, and frustrating—more of a strange experience than a movie you’d walk out of and say, “I really enjoyed that!” The film is a lot of things, and it comes together well, although I have a feeling it won’t be to everyone’s taste. A lot of murder, not a lot of boys kissing.

The Blue Hour plays May 31, 2015, at the Inside Out Film Festival in Toronto.