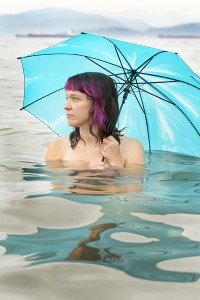 “I recently read The Young in One Another’s Arms for the first time, a Little Sister’s Classic published by Arsenal Pulp Press. The nice thing about this edition is that it includes not only an introduction but contemporaneous reviews. You can see how the reviewers ‘deal with’ author Jane Rule’s lesbianism—from the Ontarian’s opening line, ‘Jane Rule is a lesbian,’ to the obligatory ‘It shouldn’t matter’ denials. I wonder how our treatment of queer lit will read in forty years or so?

“I wasn’t surprised to find the novel beautifully written and a real page-turner, but I was surprised at how little lesbianism there is in it—only one off-screen relationship between two of the young women, Mavis and Gladys, in the boardinghouse run by the main character (and Gladys is also seeing a male lodger, Tom, at the same time). There’s a fight between Mavis and Tom the night the baby is born, also described after the fact. I suppose that was quite explicit enough for 1977! I loved the wry gentility of the supposedly with-it and modern young people, the brisk melancholy of the one-armed proprietress Ruth, whose oft-absent husband is unsatisfactory everywhere but in bed, and the descriptions of Vancouver and Galiano Island, where the novel is set. The baby’s homecoming on the ferry is particularly touching. It’s like a literary West Coast version of Armistead Maupin’s Tales of the City, in the best possible sense.”

Carellin Brooks is the author of Fresh Hell and the forthcoming One Hundred Days of Rain, a meditation on variations on the city’s least favourite weather. She has also written two nonfiction books, Wreck Beach and Every Inch a Woman. She is currently working on a novel set at Oxford University in the mid-1990s.