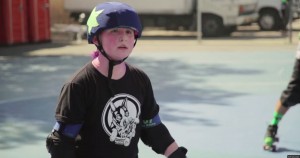 Have you accepted roller derby into your life? The transformative powers of this sport are best known within queer circles, but if you want an excuse to love a tough woman with a heart of gold, on wheels, then In the Turn is the documentary for you.

Unlike most documentaries that focus on the story of one or two people, In the Turn takes an ensemble-cast approach to storytelling. Although there are a couple of through lines, the documentary is mainly a snapshot of the women’s roller-derby movement, especially the queer roller derby movement, which brings us to the Vagine Regime. Based in the US, the Vagine Regime is an international queer roller-derby collective, bringing together players from all over the world.

When the Vagine Regime gets a letter from a roller-derby mother of a ten-year-old transgender girl, Crystal, from Timmins, Ontario, who stopped playing sports after being told she wasn’t allowed to join girls’ teams, they decide to share her story and take action. The film examines the lives of queer women (and even a few guys) from all across the world, cisgender and transgender alike, whose lives have been changed by roller derby.

tale is a pastiche of the incredible lives of a dozen absolutely gorgeous, lovely people. The only problem with trying to tell the stories of so many amazing people is that it sometimes doesn’t feel like enough time is spent with each character, and they just fly by on the screen. This is an issue of limited screen time rather than a major flaw. A couple of stories veer off from directly derby-related events, but Crystal’s through line always brings it back together.

Beyond the young derby star from Timmins, In the Turn tells the stories of several trans-identified people and is, in a way, a love letter to transgender people’s participation in the sport. Fifi Nomenon, a Vagine Regime player and transgender woman from Texas, explains how before she started playing roller derby she would have been self-conscious about being a physically strong woman, but how she’s now taking strength classes and deadlifting—a fantastic illustration, among many, that there’s not one single way to be a woman. Nomenon’s story, along with others in the film, is an extraordinary way to show trans youth that there are happy, healthy, successful trans-identified people doing something they love.

In the Turn is wonderfully celebratory and meaningful, with something deeply important to say about the role of community and role models. Through the lens of Crystal’s story, In the Turn explores how people from disparate (and sometimes traumatic) backgrounds can come together for camaraderie and healing. Maybe you’re the kind of person who could not give a single shit about sports, but I guarantee that by the time you’re done watching In the Turn, you will be excited about roller derby, especially these gorgeous queers on wheels.

Michael Lyons (@queer_mikey) is a queer-identified writer, journalist and game maker. He writes for DailyXtra.com, where he and a colleague pen History Boys, a bi-monthly column on lesser known LGBT history. He has a story coming out in an upcoming anthology titled Rad Women and the Things They Did. He is also working on his first video game, an episode of a popular LGBT-positive dating sim for young people.