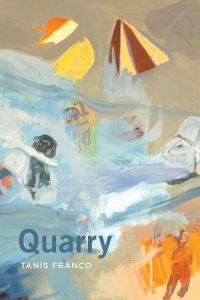 Quarry by Tanis Franco hits all of my major interests: poetry written from a gender nonconforming / queer perspective, focused in a Canadian locale, and peppered with numerous references to literary theories, along with pop culture. Oh, and in all of this, these poems are also somehow about geology. I was sold before I even opened the book, but now that I have read (and reread) many of the sparse poems, I’m still sold–which is really what matters.

Quarry contains many eclectic pieces as Franco’s style refuses to be pinned down. In some poems, the lines run together without punctuation like an ode to Gertrude Stein; other times the lines blur and seem amorphous, a sort of Ezra Pound image poem that resists being categorized. Then there are the downright concrete works like “deep” which has a Gregory Corso “Bomb” feel to it while being about trauma. Beyond the impression citations, however, Quarry has staying power as poetry–which is impressive since so many of its elliptical poems are about temporary situations. In “halloween” a sense of urgency springs from Franco’s lyrical descriptions of queer social life in Montreal:

a frieze painted on a grecian urn,

still, ghosts for this evening only –

nothing can press against nothing

This poem, like many others which encapsulate the Montreal scene, describes queers on a night out, a night that may feel as if it will last forever, but more often than not is a quick relief. For the most part, queer or straight, the bar is a temporary place. It is visited at night, often clouded by noise and blackout; by morning all that lingers are regrets or a one-night stand. While Franco’s work valorizes much of that temporariness, there is still a deep sense of stability in many of these poems, too. It’s not just the stability of the person Cal who is addressed throughout many poems, or the sense of the solidarity in the queer community; it’s the deep time of geologic history itself.

Before I go on, I must make a disclaimer here: I’m neither a science student nor a scientist, but I do love geology, and have a glass display case full of unpolished rock and mineral specimens. When I’m being generous, I might call myself an autodidact of geology, but more often than not I’m distracted by shiny things and wish to keep them as long as possible. That precise flirtation between the serious and the inconsequential; the shiny and the solid; the temporary and the deep time also fluctuates in Franco’s work. All of Quarry is a testament to this balance between two binary extremes, effectively advocating for a non-binary stance to gender through a deconstruction of the earth’s surface in the image of a quarry.

Throughout the 80-page work, there are six official quarry poems, all marked as such by the “Quarry” that appears in their title and the capital letter that ends up being the minority in Franco’s work. These poems contain lines which are sometimes dense and only divided through slashes or run-on sentences; other Quarry poems are sparse and lay on the page like scattered stones. Some talk about the environment and the damage a rock quarry does, others talk about the socioeconomic and cultural implications of the workers being there. Many of them glean from headlines, encyclopaedias, or PBS to tell their story. And the story, at first, seems to only be about rocks. It seems like it has nothing to do with being a queer poet–but when I thought of Wai Chee Dimock’s analysis of geological “deep time” and its relation to American Literature in her work Through Other Continents, I realized exactly what Franco was doing, and how wonderful it was.

In effect, Franco takes the “deep time” of ecological history and transfers it to the deep time of queer life. So often gender and identity is viewed as ephemeral, as surface artifact–as something shiny and nothing but. But by comparing the shiny next to the solid, Franco makes the startling claim that the quarry hole which “Nobody / knows / how / deep / it / is” and the quarry “hole / [which] is / permanent” is the same as the queer person’s own interior trajectory, as well as the community’s history. We are not all just shiny objects, seeming to emerge from nowhere and for no reason. There is a deep sense of permanency and legacy here–something which feels as if it’s needed now more than ever.

Quarry reminded me of all the things I love about poetry, but it also reminded me of why I have a glass case of specimens by my desk, and why I still love things that are shiny as much as I lament only being perceived as the same type of shiny ephemera. Quarry is a collection that will last, one I will recommend for some time.