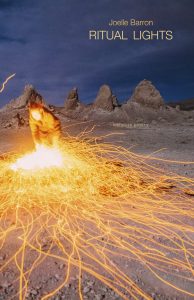 The book opens with a series of poems that explore sexual violence and family dynamics through extended reference to Greco-Roman mythology. Barron uses the figures of Persephone, her mother, Demeter, and Hades, god of the underworld and Persephone’s abductor, to map out a constellation of the speaker’s own relationships. The author’s interaction with this myth reminds me of Sue Goyette’s most recent title, Penelope in the First Person (Gaspereau Press, 2017), where the story of the Odyssey is retold through the eyes of its protagonist’s wife. While Barron seems to take inspiration directly from the American poet Louise Glück, whose poem “Persephone the Wanderer” provides the epigraph for Barron’s “Little Girl/Chaos Bringer”, their register is closer to that of Goyette’s Penelope, rooted in the colloquial language of the contemporary world, while Glück’s poem is more lyrically ethereal.

The opening lines of “Little Girl/Chaos Bringer” come as a direct response to Glück’s version:

into chuck. In mythology,

as in popular culture,

than rapists. Sometimes I feel

The speaker is direct, addressing their daughter and blurring the archetypal boundaries between woman-as-daughter (Persephone)—the role the speaker occupies elsewhere—and woman-as-mother (Demeter). In this, Barron highlights the inevitability of sexual assault in a patriarchal culture as an experience not unique to any one generation.

In “My Hades”, the god of the underworld becomes a stand-in for four men from the speaker’s past, who are described over the poem’s stanzas:

Hades no. 3: walked into hell

with him. A medieval-themed

their lagers. Tried to fight

this time, chanted, No, writhed

for me. I have to laugh

In addition to depicting the trauma of rape, this stanza alludes to a system of compulsory heterosexuality. Later in the book, “Not Puddles” more directly addresses the speaker’s struggle with labels and categories around sexuality and gender:

Not queer enough, too stealth. Not

Not men, not women. Not the guy

with your face, fuzzy. Not the girl with my skirt,

Further along, the anaphoric repetition of “not” leads into a rebellious declaration of boundaries and the speaker’s reclaiming of their identity:

at the party a roadmap

of our junk. Not explaining why

I wouldn’t rather fuck a real guy

with a Disappointment Guaranteed

bloodflow dick. Why I’d rather

fucking die. Not letting you get beat

up in the bathroom. I have bear

mace in my bag.

As in “My Hades”, here the poet uses humour to undermine the misogyny and homophobia the speaker faces.

Ritual Lights explores another narrative of bodily trauma and healing in the speaker’s experience of pregnancy loss, first alluded to in “Universal Miscarriage”. Later, in “Pat & Vanna,” the poet finds another famous counterpart for this experience, not in a mythological figure, but in Vanna White, co-host with Pat Sajak of Wheel of Fortune:

her first pregnancy in ’92

with a puzzle, solved: VANNA’S

on the lights, his eyes wet. She

miscarried before the episode

He laid a hand on hers under

immigrants and her, half Puerto 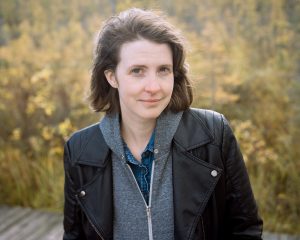 In the wake of loss, a moment of human connection suggests a path to healing. Like the Vanna White depicted in this poem, the speaker will find support in their relationships with family, friends, and a new lover.

The collection’s poems on trauma are offset by pieces like “Pat & Vanna”, which remain hopeful. In this context, the book’s title can be understood as referencing the everyday practices that survivors access as a way to heal. Notably, Barron’s poem “Five Spells” echoes Amber Dawn’s “Sei Turni (6 Spells for #Canlit)”, a poem that appeared as part of Room Magazine’s 2016 No Comment project, which featured writing on the theme of sexual assault. Barron’s “Five Spells” is written in the same spirit as Dawn’s poem; acting almost as a programmatic piece for the book, its five parts present different steps or spells, following the speaker as survivor, lover, and parent, and connecting them to a larger network of survivors:

Ask before every touch. May I kiss you? May I wash

you? Make no holy. Untangle the forced compliance

of your own childhood, where you learned your place

as a sacrifice. Make tea with stinging nettle,

raspberry leaf. Your ancestry is thick with witches,

stirring turmeric into milk. May I kiss you? May I hold you

(“3. Incant Consent Over Your Daughter’s Body”)

Here, Ritual Lights reminds me of Leah Horlick’s For Your Own Good (Caitlin Press, 2015), which followed an abusive relationship between two queer women. Just as Barron references the occult in their speaker’s journey of healing, Horlick’s speaker looks to love and magic in the wake of abuse. While it seems pat to call poets like Horlick and Barron “brave”, their collections are impressive and noteworthy for their unflinching portrayals of survival and queer identity.

In reading Ritual Lights, I appreciated Barron’s willingness to look at difficult subjects like sexual assault, pregnancy loss, and homophobia, as well as the steady, unflinching voice that runs throughout the collection. The speaker assumes a certain authority and strength, though they also leave room for tenderness and humour. Barron is a poet to watch out for, and I am keen to see what they do next.

Annick MacAskill’s debut collection No Meeting Without Body was published by Gaspereau Press in the spring of 2018. Her poems have appeared in journals such as the Literary Review of Canada, Grain, Prism, Room, The Fiddlehead, Arc, and Lemon Hound. She has been selected as a finalist for prizes including the CBC Canada Writes Poetry Prize, The Fiddlehead’s Ralph Gustafson Prize, and a Pushcart Prize. Originally from Ontario, she currently lives and writes in Halifax.