A flying woman, balances between the cruel heat-drafts of mid July
She hovers, between tin-can house-music and picnic-fattened ants whose licorice-backs gleam in the merciless summer heat
Her support? The co-conspirator to this rebellion against gravity? Perhaps she’s a childhood friend, a lover, an estranged cousin with whom contact has only recently been rekindled.
Who ever she is,
Magic, however transitory, is still magic.
Amazing, how three feet off the ground
can become three thousand
Her feet supports her abdomen, and anything is possible.
Three seconds becomes three years
and the same familiar faces become unfamiliar but friendly-in-their-own-way faces
and the pen keeps scrawling these ragged observations.
Broken life, and I am Awesome used to be the only two things she could utter to herself every morning. At first they seemed like polar opposites. Then, she thought cynically, they are quite the same thing. These days, she’s not sure, and strangely, this uncertainty feels the stablest of all. Stability is found where you least expect it.
Like this balancing act,
Her partner in circus-antics is actually a complete stranger, but she may as well be an estranged cousin, and maybe she will become a lover, maybe a friend?
How is this possible? She dares to think for a second, but quiets this thought
because measuring the distance between you and the ground is the surest and quickest way to fall So instead she thinks the breeze. 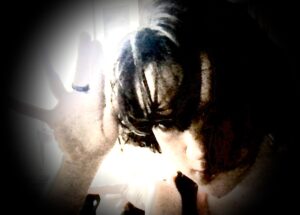 Juli is a young writer with a flair for the dramatic and a love of languages. His creative works have appeared in various publications under various names. When not writing, Juli is either terrorizing the denizens of Montreal with his reckless bicycling, working in the library or daydreaming, possible all at once.