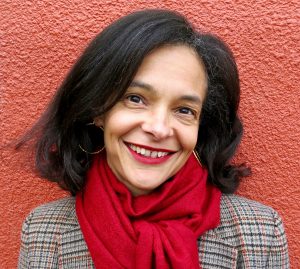 Suzette Mayr expertly juggles funny, unsettling, weird, and satiric in her whimsical fifth novel, Dr. Edith Vane and the Hares of Crawley Hall. In it, the University of Calgary English professor creates a hapless, overwhelmed and under-performing barely tenured English professor who works at the hellish University of Inivea (located—via a Twilight Zone portal—in southern Alberta). Trying to cope with publish-or-perish pressures, loudly displeased students, an ex-girlfriend with questionable stability, a literally crumbling (and apparently haunted) workplace, and corridors of colleagues who spell trouble, she whispers newly learned self-help mantras while self-medicating with wine, pot brownies, and the ample breasts of a neighbour in her condo building. Also, she’s contending with a growing population of unfriendly-seeming big-eared hares…

BJG: Your last novel, Monoceros, came out in 2011 to widespread acclaim (the Globe and Mail reviewer called it one of the “most imaginative, quirky, and emotionally devastating novels I’ve read in a long while”) and appeared on many literary prize lists. When it came to writing a new novel, did you find that success affected your ability to write? If so, in what way(s)?

SM: That book got a lot more attention than I was used to, and I had quite a few strangers contacting me about the book in really positive, wonderful ways. I started getting worried, though, that these same people would expect my next book to be the same. Monoceros was a serious book about a tragedy; Dr. Edith Vane and the Hares of Crawley Hall is a lot more comic, and the nature of the “tragedy” in this book is different, and handled satirically. I fretted momentarily about whether or not the subject I was writing about in Dr. Edith Vane was weighty enough, but then I just decided f*ck it. Success is writing a book you’re proud of and that matters to you, not the book that gets the most attention.

BJG: As a novelist you’re clearly drawn to comedy. If there’s something called “the comic world view” (and I’d argue there is), what draws you to it?
SM: I don’t know about this. I don’t set out to write comedy—I think the comedy that’s read in my work is a by-product of the language choices, and possibly contradictory perspective, or a devotion to telling the truth even though the truth is usually absurd. I’m usually surprised by what readers find funny in my writing, and when I last tried to deliberately write something funny, Alana Wilcox (my editor at Coach House) told me basically that it was too broad. Which was true—it was really obvious and try-hard.

BJG: What about the fantastic?
SM: I started writing fiction in the 1980s and 1990s when magic realist fiction was still a big thing. I loved how writers like Toni Morrison in Beloved and Gabriel Garcia Marquez and Isabel Allende in their books pushed metaphor into the real, and the possibility magic realism presented for me as a writer to write about my own reality as a queer, biracial person in ways that were unique and made sense to me. Now that time has passed, I’m writing more that’s explicitly fantastic or weird rather than magic realist, but magic realism is part of my roots. Saying the unsayable is what I endeavour to do, and the weird and fantastic are the languages that work for this.

Also, by the by, there is no way that what we apprehend with our five senses is all that’s out there. There’s no way. Listen, when I see one of our cats staring at the totally blank wall in our kitchen for minutes on end, I know there’s a supernatural entity doing some hijinks in that wall that I just can’t see. Also, how boring and sad would the world be without the possibility of the weird? I would be very sad.

SM: Two artists who were also hugely influential on me in my twenties were the American writer Joyce Carol Oates and Canadian filmmaker David Cronenberg. I felt when reading or watching their work that I’d found kindred spirits who spoke my language, and who understood that bodies are unwieldy and disloyal. I love what Oates says about the grotesque—that the grotesque “always possesses a blunt physicality that no amount of epistemological exegesis can exorcise. One might define it, in fact, as the very antithesis of nice” (Oates’ emphasis). Bodies are a matter of fact. They attract, repulse, interfere, and demand, they can embarrass and undermine you, they shape you. Writing that is considered grotesque for me is usually writing that is about unexpected bodies, or bodies that refuse to hide and follow the script.

BJG: Along with the comedy, your book offers a gimlet-eyed view of the ivory tower and the English department in particular. It makes “publish or perish” the least of a professor’s worries. How far removed from your experiential actuality is the English department where Edith Vane works?
SM: People in my English department might disagree with each other or each other’s politics, but they are for the most part civil to each other, and the job is not that exciting or dramatic compared to what’s conveyed in the book. Really the department Edith works is in is a composite of every terrible thing I’ve heard about happening in a university. The use of the verb “to refresh” as university-speak for firing a professor is something a professor friend in Australia told me about; I’ve heard of department meetings where there’s constant weeping; one department meeting where the department head had a heart attack; and I can’t go into detail here, but I’ve heard many, many stories about extraordinarily dysfunctional PhD supervisor-student relationships. I’ve also encountered numerous professors who’ve been brainwashed into believing that their job is more important than their physical and mental health, and some who as a result become what I would consider high-functioning alcoholics. I was starting to go down that road (not the alcoholic part—I refuse to tolerate hangovers), and I finally had to get a grip and decide that if having some kind of a social life outside of my job and pledging to go to spin class twice a week meant that I was a lazy professor, well then I was going to be a lazy professor.

It’s also a fact that many university campuses around the world are full of brutalist buildings that are now reaching their expiry dates—I don’t have anything against brutalism—but they aren’t the healthiest places to be right now because of issues like asbestos and also disintegrating structure.

SM: I think that all universities are to some extent gothic. I remember someone outside of academia—I’m not sure if she wants to be named so I won’t name her—once saying to me how she thought universities are archaic and anachronistic. I think I agree to some extent. You just have to attend a university graduation ceremony and see all these academics marching around in hoods and capes and black velvet Tudor bonnets, hear the Latin phrases tossed around, watch the ceremonial procession of the mace down the aisle, notice the old-timey calligraphed parchments, and in general see that devotion to title, rank, and ritual to know that what you’re dealing with is old and a bit weird.

BJG: Your novel presents us with an out-of-shape book-loving mixed-race lesbian with a growing appetite for wine and edible marijuana. In many ways she’s an underdog figure, a softhearted David in a world of predatory Goliaths. How did her eventual fate (no spoilers!) come into focus for you?

SM: Hmm. How to explain this without spoiling the book? From the very beginning of the novel I’d say it’s pretty clear that Edith is screwed. There’s the lovely myth we tell ourselves that the good guys always win, crime doesn’t pay, niceness comes first, integrity matters, sincerity and kindness are useful and valuable qualities. But let’s face it – most people read kindness as weakness. Donald Trump won. Nice, sincere, introverted, non-competitive people get overlooked or ignored at best. Edith gets the end that’s coming to her. She ends pretty well, given the circumstances.

Brett Josef Grubisic teaches in Vancouver at UBC. He’s the author of The Age of Cities, This Location of Unknown Possibilities, and From Up River and For One Night Only.