You’ve been dead three weeks and it’s time to clean out your trailer.

Sun glints gold off the dangling leaves. The sky faded denim. I could think of a hundred things I’d rather do today. A thousand. At least Brian’s working too.

It’s silent up here in the boonies, no horns or sirens or passing cars, only the lonely sough of the wind through the balding maples and alders. It’s both peaceful and unnerving.

Inside the trailer it’s worse. Inside, the silence is ear-splitting.

I put on my Bluetooth speaker, blast Joan Baez and sing along with forced bravado, all the while thinking of you, lying there in the room at the end of the hall, the one with the shut door. Three days you lay there, until the neighbour found you. I’m sure he smelled you first.

This is not a place with a lot of good memories for me.

But by noon being together and sober is too much, almost as if we’re embarrassed to be related, so one of us, usually me, makes the run down to the store and picks up a few bottles, another flat, or both, and things are good again for awhile, a semblance of the proper father/son bond I craved so badly when I was young.

Why don’t you have a girl, good-looking guy like you?

I shrug, steer the subject back to your work, your guitar (which you can’t play), your guns (which you shoot like a marksman).

I start with the kitchen, clear out the fridge and pantry. Something brown resembling chow mein in a waxed container, an apple pie turned science experiment, a half-gallon of homo milk starting to curdle. It’s no wonder your heart quit. Somehow throwing out all this rotting food makes your death more real than any certificate or service ever could.

Next to the salt and pepper on the kitchen table are your meds, anti-depressants, same kind I used to take. We talked about our depression one time when we were drunk, our fears. We hugged each other after. I wanted to say more, so much more. I think you did too.

Did you die with your eyes open or closed was my first thought when Aunt Melanie called in the middle of dinner. Brian said we should pay the bill and go but I said I was fine, that leaving the restaurant wasn’t going to bring you back. I even ordered more sashimi.

From the kitchen window I look out into the backyard, at the barren fire pit, around it the rotted Adirondacks covered in leaves and twigs.

When I visited you last Christmas, sat out there drinking IPA, burning the trees that fell in a windstorm, doing you a favour. It was the last night of my visit and I asked you to join me for a beer, but you said you’d rather take a nap. I realized then there was nothing left to salvage in our relationship. I was twenty-eight and you were fifty-nine and neither of us was going to change.

I remember Mom telling me how you guys got those chairs for a wedding present, how you sanded and stained and sealed them every few summers to keep them up. Now they’re split and rotted and look like shit.

When Mom met you in the eighties you were young and fit, assistant manager at a Super Valu, drove a little red Triumph. The two of you played tennis at the court by your apartment. You ran in the Vancouver Sun Run.

Did you have any inkling back then you’d spend your final years in a rundown trailer? That your life would grow spotted and spongey like these neglected chairs?

I don’t think anyone intends on running their life into the ground. Maybe it was subconscious. Who knows? The human psyche is a vast network of freeways and overpasses with no roadmap. A lot of us never reach our destination.

I spent a lot of time thinking about how I was going to tell you.

I guess I was afraid—me, a guy with no problem lecturing a room of thirty surly teens about the relevance of Shakespeare in modern life, or whether Holden Caulfield was a social pioneer or indulgent whelp—afraid of you, a clerk at a hardware store, and what you’d think.

First, I was going to send you a letter.

Then I thought of giving you a call, asking if you were sitting down.

Only in the deepest recesses of my mind did I consider telling you in person.

Would you have understood?

Would you have accepted me?

But would I have cared?

No. I don’t think I loved you enough.

From the other end of the trailer comes a clatter, something falling and landing on the laminate. I turn off the music and stand there listening to the silence and the wind, the clang of Grandma’s old chimes outside.

I take a few steps down the hall, heart thud, thud, thudding. Whatever the sound was, it had come from the room they found you in, the one at the end of the hall. The one with the closed door.

You know and you’re letting me know you know.

I’m afraid. I realize this as I get closer to the door, put my hand on the cold brass knob, turn it.

I’m about to write it off as the blinds but then I see it, the picture, lying face down on the floor.

I kneel down and pick it up. It’s a picture of you and I when I was very little, when our love was freshly out of the oven, when you were my Odysseus, Beowulf, and Gandalf all rolled up in one. You’re sitting on an ugly floral nineties couch, clutching me in your lap.

I look at the picture for a long time, thinking I might cry but I don’t. Instead I set it back on the nightstand, next to a picture of Grandma when she was young.

I shut the window and close the door, grab my phone and speaker from the kitchen, not bothering to remove the bag of rotting food.

I’m halfway to the front door when I hear the same clatter from the back of the trailer. This time I don’t investigate.

Instead, I get in my car, turn up the radio, and head back towards the land of the living. 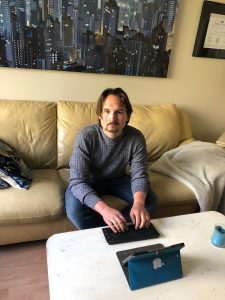 Chris Slater is a 29-year-old aspiring writer living in Gibsons, BC. Shortly after graduating with a diploma in journalism from Vancouver’s Langara College, he realized his true passion for writing lies in fiction. When he’s not writing he enjoys reading, running, and drinking craft beer.