“Tell me a ghost story,” I ask, curled in bed with my Naynay Rosie. It’s our first night in the Philippines, the first time she’s seen me since I was three. Night crawls over Manila. Our hotel room is sixty stories high, overlooking the city. Even from up here, we can hear the blaring of cars, the winds against skyscrapers, the sleepless hum of a city built on ancient bones. My grandma looks to me, an eight-year-old child, with unsettled eyes. Eyes that have seen the echoes of our restless past. From the wake of America’s so-called liberation, to Marco’s explosive reign. From the Manila Ghetto to Tandang Sora, named after the “Grandwoman of the Revolution.” Unlike her Canadian niece, she is weary of the spirits of the land. So when she hears, “Tell me a ghost story,” she sighs. Her love for me outweighs the burden of our people, the stories of our women.

“Have I ever told you about the Manananggal?”

I didn’t believe my aunt the first time she told me that she could see ghosts.

“No, it’s true,” Mama Kat insisted. Her name was Katerina, my dad’s cousin, no direct relation to Naynay Rosie. She was too young to be called Tita, aunt, and Ate, older sister, was definitely a contender, but we settled on Mama for the pun. You see, she lived in Makati, a city within the Manila Metropolitan. Ate Katerina turned to Ma Katerina which then turned to Mama Kat. She had moved from the Philippines and began living in the spare bedroom of my parents’ house.

“What do they look like?” I asked, sitting at the foot of her bed. Mama Kat was flipping through a copy of Sailor Moon—the seventh book. Sailor Uranus stared at me knowingly.

Now, I didn’t believe in ghosts, but scary stories and horror movies have always called to me, even as a child. The first story I wrote was a picture book called “We Move into a Haunted House.” It was two and a half pages, unfinished: I had stopped writing mid-sentence, as if the ghost had leaked through the words and led me away.

“Well,” my aunt hesitated, putting down her book. “They look like normal people, but you can kinda see through them.” It wasn’t long after Mama Kat moved to Edmonton that she traded her skirts for wide-cut jeans, and her shoulder-length hair for an undercut, hidden under a bob—it was the shortest her mother would approve of. Mama Kat explained to me the last time she saw a ghost, “It was in the Philippines. I was in the kitchen—”

“Of your house?” I interrupted.

“No, my friend’s house. I was cooking over the stove and when I turned around, she was there—”

“Yeah, we were both scared, me and the ghost. I don’t think she knew she was dead.”

“Was it an old house? Did she live there? Did she die in that house? Was she white? How see-through was—”

“Noa!” It was Mama Kat’s turn to interrupt. She scratched at her freshly shaven sides in irritation.

She waved it off, probably used to the interrogation—or just tolerant of my enthusiasm.

“Did you see her again?” I asked, my mind continuing to reel.

“No. After the initial shock, she vanished.”

My aunt explained that she had a third eye, and that was how she saw ghosts. I asked where her “third eye” was located, and she pointed to a marble-sized mole on her neck with hair growing out of it. I poked it.

Her sightings started when she was in secondary school. Transparent soldiers marching down otherwise vacant streets. A headless woman lying on the ground. When her mother sent her away to an all-girls’ Catholic college, she said she saw the ghost of a young uniformed spirit hanging from a tree, her skirt blowing in the wind. I asked her if she had seen any ghosts recently, but she told me that ever since she had moved to Canada, they stopped appearing. I tried to see if she was relieved, but all I could gather was the downturn of her lips, the glaze creeping over her eyes.

“The Philippines is an old country with lots of wars,” she explained. “The spirits are restless.” I rummaged through my inventory of Filipino history: Spanish colonization, something of Catholicism becoming a national religion, maybe a war… That was all. All ancient history. One hundred years ago meant prehistoric. Sweeping the colonial history of the Philippines into the recesses of my mind, I wondered if ghosts had to ferment like pickles—if all ghosts had to be old-timey. Where were the modern ghosts? The ones that would possess our phones to watch YouTube videos? As silly as it was, the thought made me shiver.

“Before she was a monster, the Manananggal was the most beautiful woman in town. She had fair skin and long, black hair that fell to her hips.” Naynay Rosie imitated her version of a pretty lady, swooping her hair around, and batting her lashes at me. “She was so beautiful that she attracted the attention of a
Mestizo.”

“What’s that?” I ask, too young to know the stories of why my last is Spanish and not Tagalog. Why am I Noa Conquista and not Noa Mapagmataas?

“A Lord,” she responds. “He was like royalty. The man came to the beautiful woman’s house with feast and flowers, and begged for her parents to let him marry her. They refused.”

I ask my Naynay why they would do that. “She could have been a princess,” I say.

“The woman’s parents didn’t like the man. They told him to go away and never return. But the mestizo didn’t listen. He went around her family’s back and made the woman fall in love with him. He showered her with gifts—gowns, gold—he even promised to buy her parents a better house. Eventually, she agreed to marry him.

I remember shuffling into my Mama Kat’s room with a blanket draped over my head, dragging it along the ground behind me. It must have been winter. My aunt had her laptop on her lap, the hard drive whirring as though to keep her warm. Above her bed was a rainbow flag and a picture of Megan Fox. When I asked about them, she dismissed me, saying something along the lines of: I just think they’re neat.

“What do you want?” She asked, quick to change the topic.

“Wanna help me bake?” It wasn’t really a question.

Mama Kat sighed and asked me what I wanted to make. She knew it would really be her doing the baking, and me making a mess.

After considering our ill-prepared pantry, we decided on crepes.

“Eggs, flour, sugar, salt…” She began reading the ingredients from her iPhone 4, the newest model at the time. “Noa, stop shaking the milk. Do we have vanilla extract?”

I followed my aunt around the kitchen, asking if there was anything I could chop up for her. She reminded me for the fourth time that nothing in the recipe called for knives. Disappointed, I returned to one of my favourite lines of questioning. “Have you seen a Manananggal in the Philippines?”

She was shocked. “You know about them?”

“Of course,” I replied like the veteran horror fan I boasted to be. As a preteen, I had a lot of unearned confidence, or maybe I had yet to learn shame.

“No,” she said. “If I saw one, I would be dead. You can’t kill the Manananggal at night.” She began to explain the way the monster stalks her victim under moonlight. “You would hear a beating of wings, a shrill shriek, tearing.”

“The tearing of her talons through your chest.”

“Are you sure you want me to keep going?” Naynay Rosie asks. She should have already known the answer. I nod my head feverously, invested in the story. Too invested to see the emotional toll it takes. “The beautiful woman eventually won her parents’ approval for their marriage, not because they liked the man, but because they loved their daughter. She convinced them to sell their house—a concrete shell with a tin roof—and attend the wedding. On the wedding day, the beautiful woman was more beautiful than ever. Her long black hair was tucked neatly under a veil and her dress, spun by the most talented seamstress in the village, cascaded down the aisle. Music began to play.” My grandma sings the typical wedding song, enunciating each
and
every
dun.

“The music played, and the bride waited for her groom. The band played for so long that they became tired and eventually stopped playing, but she continued to wait. Finally, the doors of the church burst open,

but it wasn’t her groom.

Instead, it was another man, another villager. He told the beautiful bride that he had seen her groom-to-be with another woman, a Mestiza. The villager told the bride that her groom-no-longer was already married.” Shoulders small, eyes watering, body tense and shaking, Nanay Rosie said,

It wasn’t until later that I learned how to kill the Manananggal. You see, after dusk breaks and the sun quickly falls, the Manananggal detaches her lower body. Wings rip through her back and she takes flight, guts dangling from her open torso. According to Mama Kat, you have to find the legs and salt them so that when the Manananggal returns, she can no longer stitch herself back together. Instead, she will thrash and wail until the sun turns her to dust: that’s one way to kill her.

You can force her into skirts and dresses. Force her to wear “girl” colours and grow long-flowing hair. Force her into the closet and pray to god that her soul may one day be saved.

You can kill her by taking away her family, her culture, to make her think Tagalog is an ugly sounding language, and Filipino food is disgusting. Make her believe that her skin is too dark, that the one-true god gave the Manananggal her body so that she could bleach it with expensive whitening creams. You kill her by making her believe that she is not good enough. That she needs a mestizo to make her happy.

I used to be scared of the Manananggal. The thought of seeing disembodied legs kept me up at night. Now I’m no longer scared, but angry. Over the years, I’ve listened to their stories without realising my own being written, being forced upon me as well. I practice my Canadian accent. I eat poutine and Tomato Mozzarella Paninis from Starbucks. I am told to always brush my hair and look presentable for a lady. For years, I have refused to become the Manananggal.

But I already am. 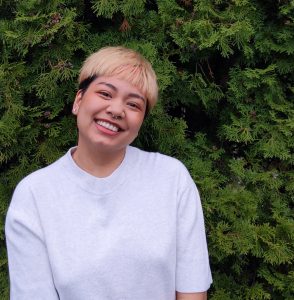 Naomi Arden Paragas Pasatiempo (They/Them/Siya) is an Edmonton-based, queer, NB artist and writer. They are in their fourth year of a BA in English at the University of Alberta where their current goal is to highlight and reintroduce the queer spaces of pre-colonial Philippines.