while brown ppl in the middle east stare as openly: who let u
cut yr hair like that, asks a young arab girl,
they will ask how did yr mom let u,

arabs aren’t
gay, no no no

we go around the table being half yt
together, my yt dad, my yt mom, my yt
family says shitty things, my fuck ytness
in me, my fuck dan savage’s it gets better crap
or the yt man whose name i forget, the “face of lgbtq,”
says love is all u need, bet he doesn’t even know
what half the acronym means

i’m here being mixed
in my mixed friend C’s tiny apartment
as we eat samosas & i drop crumbs
onto his used couch, the room orange lit,
pink & green lamp shades scattered around,
the ceiling dark without overhead lights

we try to talk about writing
but end up talking about ytness over & over
like give me tools to overcome it
or here’s all the shit it has done
but we don’t use academic words
we say fuck the unbearable ytness of academia
& everyone at my job is rich & yt
& doesn’t understand my poor brown body
selling this expensive crap
& wonder if i can steal some or
my boss says it’s sooooo cool that yr Arab,
do u speak it?
can u say something?
can u show me?
can u prove it?
prove it, prove it, prove it

or why they pronouns
i don’t
get it 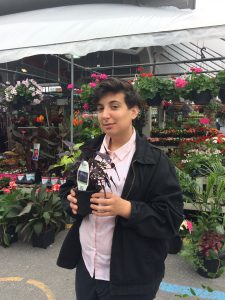 Eli Tareq El Bechelany-Lynch is a queer Arab poet living in Tio’tia:ke, unceded Kanien’kehá:ka territory (Montreal). Their work has appeared in The Best Canadian Poetry 2018, GUTS, carte blanche, the Shade Journal, The New Quarterly, Arc Poetry Magazine, and elsewhere. They participated in the Banff Centre’s Centering Ourselves BIPOC residency, and currently work as the publicist at carte blanche.