Often, day goes sweetly as a bird
returning to the branch it loves
most to watch the waters

of the lake on lazy afternoons.
Say the tree is a shade
oak. Say the bird’s not

a bird at all, but a boy
who’s learned to keep
his wings. He spends his few

hours crossing water from one bend
of shore to the other, sometimes
just to hear the gravel

grate against the hull
as he pulls the boat to shore.
Say the boy isn’t pulling

a boat at all, but swimming
with one arm holding the late
afternoon’s gold aloft, an offering

like time crossed out slowly
one square to the next, an Xing,
the flared tail of the steller’s

jay who returns to
her young no matter
what has sent her flashing away. 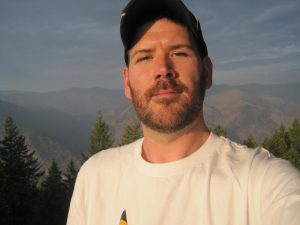 Jory Mickelson is a queer writer whose work has appeared in The Rumpus, Ninth Letter, Vinyl Poetry, The Florida Review, Superstition Review, The Collagist, The Los Angeles Review, and other journals in the US, Canada, and the UK. He is the recipient of an Academy of American Poet’s Prize and a Lambda Literary Fellow in Poetry. His most recent chapbook Slow Depth was published by Argus House Press. You can follow him at www.jorymickelson.com.