I used to think of my body as an instrument, of pleasure, or a means of transportation, or an implement for the accomplishment of my will . . . Now the flesh arranges itself differently. I’m a cloud, congealed around a central object, the shape of a pear, which is hard and more real than I am and glows red within its translucent wrapping.
—Offred, The Handmaid’s Tale

I woke up one Saturday in 2016 thinking the most nerve-wracking event that was going to happen that day was my first solo drive in my mother’s car to a doctor’s visit. It may have been childish in hindsight, but I believed the plethora of tests—after disclosing to my doctor about my irregular cycle following a recent medical scare—were a mere precaution on her part. At worst, I would get red-faced as she gave me her spiel about starting birth control. But the second I walked into her office, the air became heavy with an undiagnosable feeling of worry. The second she left the room to get her papers in order, I knew it was bad. Whether out of pity or cowardice, people tend to prolong bad news. When she reemerged and faced me, I could tell even in the absence of a furrowed brow that this was pity. I heard hormones this, plummeting progesterone levels that, and though the reasoning was long, the conclusion was clear: I can’t bear children.

I would be lying if I said I cried in that moment. Why would I? I wasn’t dying. Instead, I felt guilty that I would have to accept the pitiful eyes of my parents as I told them their eldest daughter couldn’t give them grandchildren. I felt as if I had failed to fulfill a promise to them, to a future partner, and even to my own body. At the age of 17, I considered myself a progressive girl who was instilled with the feminist ideals of “my body, my choice,” but no one had given me a rallying cry in the event my own body reduced my choices. After lab results were shown on a computer screen that reflected my somber eyes back at me, a follow-up appointment was made. I left not understanding the biological explanation, just that my body was a house that will never be a home.

Over the course of the next few weeks, I was engulfed by pamphlets and visits to specialists on top of the worries of every high-school senior. From the stacks of university pamphlets to those on adoption scattered on my dresser, I felt as if the next thirty years of my life were meant to be planned pamphlet by pamphlet within a few months’ time. Appointments on egg freezing followed shopping trips to try on prom dresses. The decisions I felt qualified to make were few and far between. I thought about how, like all teenagers, I had wished to grow up faster in order to enjoy the full scope of what life had to offer; after spending my weekend in the same black padded waiting room chair, that wish was a sick joke. Most women are reminded that their “biological clock” is ticking when they hit their 20s, but I was being told mine was a bomb already detonated.

I was repeatedly told by doctors and family alike that I had “choices” in terms of what to do about my womb. From surrogacy to adoption, I was up to my eyeballs in options but with every new “choice” I was given, I felt more powerless. My body was out of my control, and the treatment seemed to be in the hands of everyone but me. If this was my choice, why was I being pushed to act fast? I was told I was free to quit exploring these options at my own discretion, but, in the same breath, I was repeatedly reminded that every day, my chances got slimmer for in vitro fertilization, and that letting this time slip by could be my downfall in the future.

I was never directly asked if I wanted kids. It was implied by others that it’s what I should want and what I would want, therefore I needed to use the time I had now. If I were to suggest the contrary, I was brushed off as not being forward-thinking enough to plan for my future—as if it was their duty to plan on my accord and ensure my body was ready for the inevitable. I was not talked to, but rather talked at. The topic of conversation almost always revolved around these so-called “choices” that everyone wanted to remind me of in between discussions of drug side effects and ovarian hyperstimulation syndrome. Nothing felt like my choice. I had to remind myself I was still skin and bones, blood and veins, a heart and mind, not just a protective shell encasing this apparently invaluable pear-shaped organ. The womb was the patient, instead of me.

I was somehow too immature to make my own rational decision, yet grown-up enough to go through the countless appointments and hormone injections that would prepare me for “my” end goal of motherhood. The contradictory nature of this approach never came up during my many consultations with doctors because these appointments were never truly about my current state of being. They were about a life I could bring into the world if I listened to them. They were about what I should be, and what I should be—according to them—was a mother.

I did not choose this body. I do not want to relish in what could have been, but rather I want to see what can be if I am given the right support. If there is power in choice, I would like to take it back where it belongs. Not with doctors or parents or hypothetical partners, but with me, where it should be. 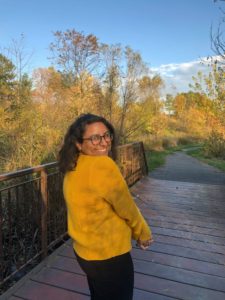 Kirandeep Randhawa is a queer Indian-Canadian settler born and raised in Toronto. She studies Political Science at the University of Toronto and is occasionally a writer. When she’s not writing essays intending to make political issues accessible, you can find her @kirandeepkaler on Twitter, laughing to herself and her cat.