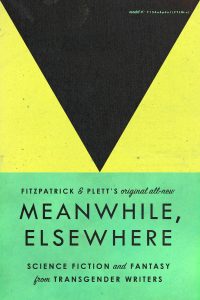 Meanwhile, Elsewhere, a sci-fi and fantasy collection edited by Cat Fitzpatrick and Casey Plett, begins with a story about a trans woman who miraculously becomes pregnant after a womb transplant without having intercourse, thereby making her the new Virgin Mary in a postmodern (and so much cooler) biblical retelling. “No Comment,” the opening story by Ayşe Devrim, highlights what the collection best achieves: questioning the world we are currently living in, with the hopes of shaping a better mythology for the future.

Most speculative fiction stories—be they sci-fi, fantasy, or horror in nature—start out with a question of “what if?” and then explore the answer to that scenario with a story. At least, that’s how a professor explained it to me when I was an undergrad and still trying to find books I liked to read. I often found trans people in spec fic, but they were never quite the main characters, or even characters at all. As Casey Plett wrote in her 2015 Walrus piece, transgender people are treated more like fantasies for a cisgender audience than they are real people with real desires. That’s why, even in contemporary stories, they end up being portrayed in mythic ways; to change genders seems like speculative fiction in and of itself. So when trans characters show up in fantasy, sci-fi, or horror stories, they still seem like a fantasy within a fantasy.

Meanwhile, Elsewhere sets out to do something different. Not only are these twenty-five stories unique, creative, and well-written, but they imagine a new world as much as they represent and challenge the one we live in. Since these stories all involve transgender characters, their identity is no longer a myth. Instead of being constrained by explaining the “real life” procedures of surgery, these characters can have womb transplants or remove boob jobs without explanation; they swap out bodies and live in VR suits or rip off decaying flesh like it doesn’t matter. Bodies fall apart in this speculative landscape as much as they are built up, and each time is as miraculous—or as horrifying—as the author crafts it to be.

The speculative question of “what if” plays out in each one of these stories: What if a trans person found an alien who could replicate as them? What if a controversial surgery could eradicate transgender identity altogether? What if Satan was really a trans woman, and you could summon her to do you a favour? The question comes into stark focus with Ryka Aoki’s story “The Gift” since, on first reading, it seems as if there is nothing speculative about it. No space suits, no ghosts or goblins, and no swords and sorcery. Just a fifteen-year-old trans girl named Samantha coming out to her accepting and supportive family.

Then again, that is the speculative part of the entire story: Samantha comes out as trans and it’s not a big deal; it’s celebrated, supported, and a gift. The fact that this story, so starkly normal on the surface, is included in a speculative fiction anthology means that there is still a lot of work to do in our current world in order for this exploratory future to become more like the present.

In addition to Ryka Aoki’s piece, there are several other transgender writers who I’ve read before and come to love: Imogen Binnie (author of Nevada), Sybil Lamb (author of I’ve Got a Time Bomb), Trish Salah (author of Wanting in Arabic), RJ Edwards (speculative author in Lightspeed magazine), and Morgan M Page (author of The Black Cube). The rest of the authors were relatively new to me, which made reading through their stories another rewarding aspect of exploration and imagination.

There are many stand-out stories in this collection—”Gamers” by Imogen Binnie still makes me smile, “Imago” by Tristan Alice Nieto had me on the edge of my seat, and “Themyscira” by Colette Arrand was one of the most poetic ones in the collection—but I’d like to focus on three in particular.

“After The Big One” by Cooper Lee Bombardier is a quaint post-apocalyptic story that documents five people from the queer community struggling after a cataclysmic event that takes place during a queer collective meeting. The group of five act as a microcosm of the queer community, keeping intact many of the in-debates and inside humour, which I utterly adored. Though the ending seemed to wrap up rather quickly, it left me with a sense of peace that doesn’t happen much in apocalyptic stories.

Similarly, I loved the lightheartedness of “Thieves and Lovers” by Emma Addams, which documents the daily life of a trans woman who works at a black and white bar—a new kind of futuristic establishment that allows for the staff to dress as old movie characters. The visual images in this story were stunning, especially as the black and white bar’s aesthetic became torn down halfway through the story; I could vividly see the colour and the author’s writing stayed with me long after.

Beckett K Bauer’s “Notes from a Hunter Boy: As Filed by Girtrude the Librarian” is a story told in diary format from the perspective of a hunter boy who, in our modern terms, would be a trans man. The way roles were assigned in this future society reminded me a lot of The Giver, but the story gave a unique twist on gender, relationships, and occupations in the future. The way the narrative was told, complete with translator’s notes, gave the story conceptual distance, which left an eerie sense of nostalgia and longing. I adore “found” stories like this—even more when they are presented through a fictitious academic lens.

Though there are many different kinds of stories with many different perspectives on the future and queer life, the anthology doesn’t feel bumpy or uneven. I think much of that has to do with the fact that there have been so few speculative fiction stories with trans people as characters—real characters, not symbols—that everything here feels fresh and new. Even if I didn’t like a story, I still understood what it was doing and why it was in this work, and knew that there would be someone else out there who would probably love it.

Meanwhile, Elsewhere ends with a story about a transgender woman being launched into space, and declaring that her previous life was the aberration. From here on in, she is herself and the world is behind her. Like the first story, “No Comment,” “Angels Are Here to Help You” does what speculative fiction does best: takes what we already have and imagines something so much better.

And maybe one day, we’ll get there.