Vivek Shraya is a Toronto-based artist working in the media of music, performance, literature and film. His Lambda Literary Award-nominated collection of short stories, God Loves Hair, has recently been re-published. On May 5th he launches a new video project, Holy Mother My Mother, a portrait of motherhood filmed during the 2013 Navaratri festival (Goddess festival) in India. The launch is at Camera Bar (1028 Queen St W, Toronto) and will also feature the beautiful short film, My Father, Francis, made by Casey Mecija (of Ohbijou).

May is International Short Story Month; what motivated you to write a collection of semi-autobiographical short stories?

As someone with a short attention span, I am invested in mediums that force me to be as concise as possible. My songs tend to be around the 3-minute mark. I make short films. I think limitations can be powerful. 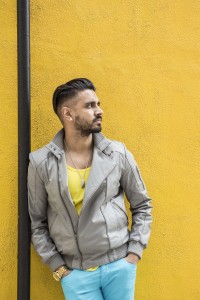 Arsenal Pulp Press has published this (third) edition God Loves Hair; why did you self-publish the first two editions and how did Arsenal get on board for the third?

I self-published the first edition out of necessity. I was a “new” writer, with no body of work in the lit arena, wanting to put out a full colour book. I understood that this would be too big of an investment for a publisher.

I had also faced a lot of rejection in the music industry and didn’t want to subject this very personal book to that process. I didn’t want to wait for an institution to tell me if my work had value or not. I took a risk. And I was fortunate that it worked out. When the first edition sold out in just over a year, I pitched the second edition to some publishers thinking that the book’s success would make it a more attractive investment but I was wrong, so I invested again. During this time, I met and toured with a lot of writers including Amber Dawn and Rae Spoon, who are both Arsenal Pulp Press writers. Amber generously introduced me to Brian Lam, Arsenal’s publisher, and it went from there.

Each story is accompanied by a beautiful illustration by Juliana Neufeld. Why did you want this book to be illustrated, and what was your process of collaboration?

Originally the idea was for the book to be a children’s book but the style of writing to make that happen was beginning to feel limiting. However, I still preserved the idea of wanting the book to have the look and feel of a children’s book. This was important because I wanted to make the kind of book I didn’t have growing up, that featured brown skin and an Indian aesthetic. Working with Juliana was one of the best collaborative experiences of my artistic career. We emailed back and forth a lot, and the stronger her illustrations grew, the stronger I wanted the writing to be.

Did you have ideas about the illustrations or did you let Juliana create images based on the stories?

When I first met with Juliana, I gave her an envelope stuffed with at least fifty image references. My idea was that I wanted each illustration to take an iconic image of Krishna, but queer them. For example, there is an image of Krishna eating butter as a baby, with a tub of butter fallen behind him. My idea was that she would take that illustration and change the butter to lipstick for the LIPSTICK story. I was very attached to this idea of queering Krishna iconography but Juliana pointed out that from her perspective, the richness of the stories were not only a result of referencing my cultural background, but also their contemporary feel. She felt it would be better to try to represent that union instead of just re-modeling an existing aesthetic, and in the end I think she was right. This is one of the many reasons I love collaborating. Because as an artist you see something one way and it’s precious to you. But it can be incredibly valuable to see your work through a different creative lens.

What strikes me about this collection is how central your body is. As a teenager I subconsciously disconnected from my body, mostly as a survival mechanism. How did you survive?

I never saw GLH that way, but I think you are right. My connection or rather disconnection to my body plays a big role in my work, and even more so in my new novel (which was originally titled Body & Body). 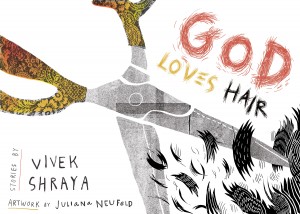 Honestly, my mother’s love kept me alive. Anytime I thought of hurting myself, I imagined her reaction. I imagined her actually falling. And that always prevented me.

So you weren’t consciously writing about the body?

Not in God Loves Hair, but it’s hard to draw that line, because my body is connected to my gender and sexuality, my body has elicited homophobia…all these facets are explored in the book. But I don’t think it was something I was explicitly thinking about when I was writing. That said, I think it would be hard for anyone to write about childhood/teenage years without body connections arising.

I find this collection to be affirming of my queerness and brownness; was that your intention when writing? Do you think affirming narratives in popular culture are necessary for today’s othered teens?

I don’t know that it was an explicit intention at the beginning. I knew I wanted to write the kind of book I didn’t have growing up and that was my writing compass. And I think visibility continues to be so important.

I am an adult, a qpoc [queer person of colour] artist and yet, when LE1F emerged, for example, I still felt an enormous gratitude. When I was starting out as a musician, there was no way I could conceive of being a queer brown artist. There were no real models for this. I think we have come a long way in terms of gay representation in the media from when I grew up but the representation is still very GAY, not really queer. And by that I mean, representation is still largely white and kind of asexual. This is why I am grateful for our mutual crush, KALINDA (from The Good Wife).

Suicide Jeans is new to the third collection and deals with depression. How did you tackle intense and difficult subject-matter without taking the story to a dark place?

That was one of those writing experiences where something magical (literally) happened in the writing. I didn’t know where the story was going to go. I just followed the writing.

Religion also features quite prominently in the collection. Are you religious? Was religion a space where you experienced acceptance growing up?

I grew up very religious and with a strong love for God and though I am not religious anymore, that history and that love will always be a part of me, and apparently my work. It honestly surprises me sometimes just how much my religious history plays out in my art, but you asked earlier how I survived, and I would say that outside of my mother’s love, it was religion and feeling like I had a place in my religious community that kept me safe. My gender wasn’t policed in the same way in my religious community as it was outside of it. Being a singing, dancing boy with female friends wasn’t “gay” or bad, it was…like Krishna! 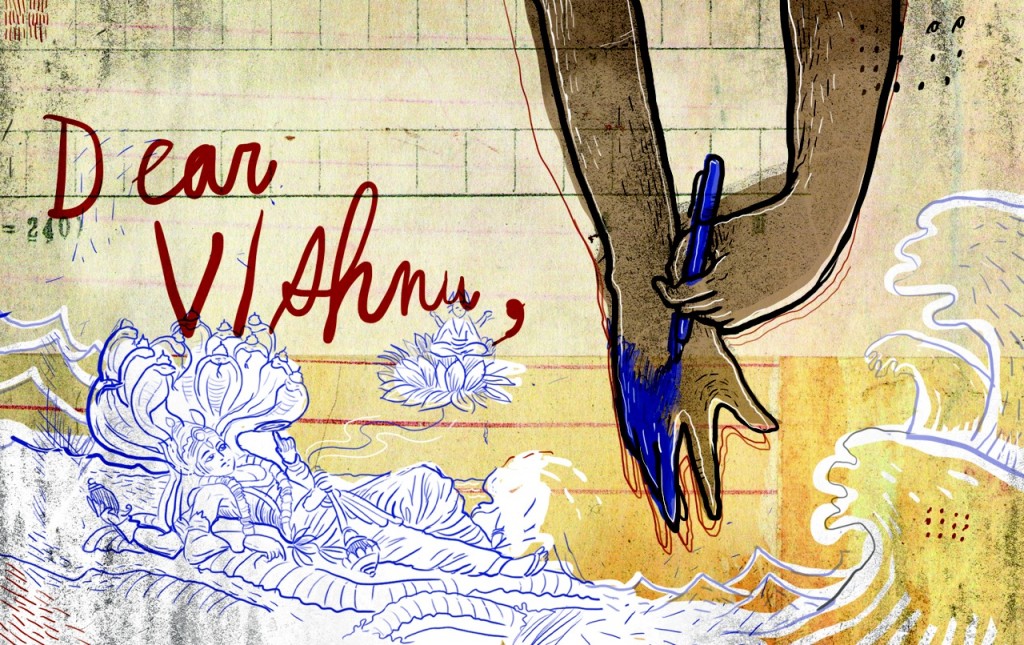 I want to be a modern version of You. I would wear a peacock feather in my hair like You, maybe use my mom’s curling iron to match Your wavy locks and get my ears pierced. But my four arms would carry a walkman, a book, a candle and an apple. There should be a “Take Your Believer to Work Day” so I can study You in action, ask questions and take notes. I am jealous of Goddess Lakshmi, Your consort, for the eternity she gets to spend by Your side. Does she know how lucky she is? If You smile, she shares it. If You speak, she hears it. It’s not fair that only one can be so close.

This is a good segue way to your newest project, a video called Holy Mother My Mother. What is it about and why did you make it?

When I was young, I would redecorate my room for every festival and the recollection of that memory made me wonder how one festival might be celebrated differently in different parts of India. Navaratri is the main Hindu Goddess festival. It revolves around Durga, Saraswati and Lakshmi, and because it lasts for nine nights it would allow for that exploration, unlike a one-day festival. Plus I am always drawn to goddess/female-related mythologies/themes/narratives. One of my friends suggested that I bring my mother for the trip, and that was the missing link. The film ended up being less about the festival and more about my mother herself.

When can we expect your next work of fiction?

Holy Mother My Mother (Teaser) from Vivek Shraya on Vimeo.