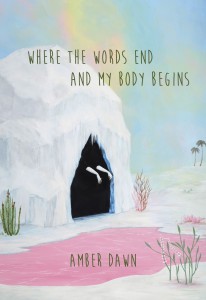 At the outset of this review, I must admit that I am biased. The truth is I owe a lot to Amber Dawn. She has encouraged and inspired me over the years in such ways that I’ve sometimes wondered what my creative career would be like without her. When I read her work, I inevitably find her observations skilful and attuned. So it was with great enthusiasm that I picked up Where the Words End and My Body Begins.

Initially I was most curious about her choice of form: Glosas, a Renaissance form. As I took a step back and thought about the great artists of the Renaissance and the many hats they had to wear, I immediately saw the connection. Amber Dawn is many things—a survivor, an educator, a poet and activist—and this collection documents the experiences of one who has lived more lifetimes than most and who must have a hat closet to match.

This collection has so many layers to its complexity. On the one hand, Amber Dawn seems to long for simpler times, yet her poems also concede that things have gotten better for her personally and for her community at large. Well, sort of.

She laments the million-dollar condos that now dominate Strathcona, the Downtown Eastside, and surrounding neighbourhoods, but this is not pure nostalgia for some bygone era. “I want to go back to the 80s/(but without the cocaine)”—lines from a poem titled “A Group of Sluts is Called What?”—captures perfectly the mood of her reminiscence. While she is appreciative of previous times, Amber Dawn is quick to point to past destructive tendencies, whether we interpret her observations as personal or collective.

She states that “the internet is a boner killer/everyone watches gangbangs from home,” suggesting, perhaps, that the fringes have become mainstream, which makes her solemnly wonder what happened to the communities that formed around the edges. Likewise, she says, “the Kitten Theatre is now a Pottery Barn,” an observation that sounds at first like the kind Joni Mitchell would make about paradise and parking lots, but this would be far too simple. Is she saying that the world was better before? That is a tough one. Especially when she references (personal and/or collective) rape, poverty, and violence.

The common denominator in her poems is that current reality, at least in Vancouver, is filled with slick marketing. The poems suggest that perhaps we should stop maligning from a safe distance the gentrification programs and condo developments and their shallow marketing schemes. Perhaps we are meant to ask not how we are different (or better) than such glossy campaigns, but how we are similar.

It seems to me that Amber Dawn includes herself in this allegation. She contrasts her “metropolitan persona” with “the dirt [she] came from.” Parallel to the city’s changes, her poems reflect that she too is in the process of transformation from radical queer sex-worker activist to her contemporary role as faculty at UBC and celebrated Vancouver culture maker. In the past few years, Amber Dawn not only curated an exhibit at the Museum of Vancouver and was director of programming at Out on Screen, she also won the City of Vancouver Book Award for How Poetry Saved My Life. Hailing from the obscurity of a background many people in mainstream society routinely choose to ignore, her work is now more centre stage than ever. This must be a strange phenomenon, and the poems seem to wrestle with her own identity as much as with the identity of an area of the city that once seemed forlorn and forgotten and that now is home to properties that run in the millions.

What is fabulous about Amber Dawn’s unapologetic style is that while the packaging may have changed, the content has not. From reading this collection, I gather that Amber Dawn agrees with Jeanette Winterson’s recent statement that “we are moving further away from democracy.” Fiercely concerned with grassroots politics, her work tries to make sense of a recent shift in economic power with lines such as “Money is a poor man’s myth.” She urges her reader to “keep with grit.”

One of the biggest teases in Amber Dawn’s memoir How Poetry Saved my Life was the ending to her titular poem in which she references her younger self and says, “one day I’ll tell you about her.” Like a great speech, it left me wanting more. In this collection she delves deeper into her character and experience.

This brings us to her choice of poetic form. By writing glosas, Amber Dawn weaves her own words around lines borrowed from other poets. Glosas come from a revolutionary time. During the Spanish Renaissance, great changes were afoot. It was a time of culture clashes and social upheavals.

The Renaissance was a movement of looking back to the ancients for wisdom and freedom from dogmatism. In a similar way, Amber Dawn’s poems pay homage to her elders, queers whom she aptly calls the “foremamas and papas.” Her obvious respect for those who came before her is indeed reminiscent of the Renaissance sentiment. It’s a lot like Shakespeare’s reverence for Ovid and Virgil.

However, the Renaissance was also a time when shifts in power stripped women of the right to own property and practise herbal medicine (the old-school feminism of reproductive control). The idea of returning to the classics meant returning to a time in which women were seen as slaves, as they were in Ancient Greece and Rome. 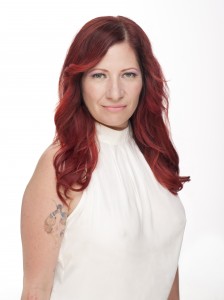 Amber Dawn’s collection suggests that we may indeed be living in such times right now, though rather than focusing categorically on women, Amber Dawn is concerned with a broader group: the disempowered. Though she does not explicitly say this, she sure hints at it with urgent words dedicated to gentrification. Her poems express the difficulty of adapting to changes in one’s neighbourhood. All that we know is that the times, they really are a-changing. Highly political yet non-dogmatic, these poems are a reminder of what really matters: community. Amber Dawn positions herself in the context of a long line of artists, poets, and activists who matter to her.

When I came to the poem “Three Portraits of Femme Queens, Ousted,” which honours, among others, her personal friend Trish Kelly, I was delighted. Kelly’s experience in Vancouver’s last municipal election seemed to be a symbol of everything that is wrong with the direction in which this city is headed.

Amber Dawn poignantly captures the anger that so many of us felt when we ingested the news that Vision Vancouver would not stand by Kelly. It was an affront, and a foreboding and conservative message. Such a slap in the face deserves a punch back, and Amber Dawn’s poem delivers.

However, Where the Words End and My Body Begins also includes love poems and nurturing maternal poems directed at young queer “whippersnappers.” The poems offer a call to action and I can only encourage younger queers to adopt Amber Dawn as a foremama. With wisdom wrapped in tough love, she asks: “Think Stonewall had a hashtag?”