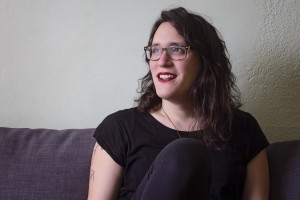 Jia Qing Wilson-Yang is an author and musician whose writing has appeared in Bound to Struggle: Where Kink and Radical Politics Meet (ed. Simon Strikeback), Letters Lived: Radical Reflections, Revolutionary Paths (ed. Sheila Sampath), and Room magazine, and Metonymy Press recently launched a Kickstarter in support of her first novel. I had the pleasure of interviewing Jia Qing via email about craft, canon, and whatever “Canadian” literature really means anyway.

You’re about to publish a novel, Small Beauty, in which Mei, the protagonist, mourns the loss of her cousin and uncovers some family history. Can you tell us a little more about the book?

Yes, definitely. For me the book is mostly about being a mixed Chinese kid in Southern Ontario. I don’t give a year in the story, but it’s very much around the turn-of-the-millennium kind of time frame. It’s about nature and the ways what’s happening in nature affect us. It’s about ancestors, blood and ideological ancestors. It’s about being frustrated with the pervasive whiteness in LGBTQ circles. And it’s about the importance of community and—this is something a friend said to me once before I had finished writing the book—it’s about the ways that being self-absorbed can be a necessary step to healing from trauma, but the importance of that self-absorption being a step, not a place to settle long term.

You’re not new to writing, but Small Beauty is your first novel. Can you tell us about your experience of writing long-form fiction? What were some of the challenges? What did you like best about it? 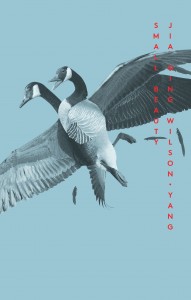 I’ve loved writing long-form fiction, I’m excited to keep doing it. The process of fleshing out a plot and seeing it evolve from the initial fragmented ideas into something almost entirely different was exciting. Working with the folks at Metonymy has been a great first experience with editors. The biggest challenge was letting go of my expectations of what the story should be, to let the story show me what would happen next. I’m a control freak, no doubt about it. This writing process, as funny as it may sound, has been a helpful step in letting go of control. What I like the best about writing long-form fiction is the possibility it holds to reflect and refract the world around us. To me it is one of the closest places to my imagination. I love that while I may imagine the story in a specific way, a reader will picture the settings, the characters, slightly or completely differently than I do. I’ve loved being able to sit with the characters. Most of all, the opportunity to get to pursue this kind of project with the support of a publisher feels like a huge blessing. The validation it’s brought to my view of the writing I do has been humbling and healing.

Throughout this project I’ve been in school and working full- and part-time. The process has been working with deadlines in fits and starts. That sounds more dramatic than I mean … Much of the writing has been thinking through the story, on the subway or streetcar, walking my dog, spacing out in class. I hear about people having the life circumstances and discipline to write a bit every day and that’s just not something that is happening for me right now. At least not creative writing every day. Were this an audio interview I would give an awkward laugh here and probably sigh loudly and say something like “aannyway.”

You’re also a musician. Does performing music exist in the same creative space for you as writing? 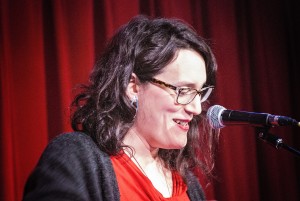 Yes and no. Much of the music I’ve made involves words and poems, but writing music is something that happens spontaneously in a moment of improvisation. Writing [fiction] comes from more of a “what if?” kind of place: I tend to imagine a scenario and roll with it. Writing is more directive. Also music, at least the kind of music I’m interested in make these days, is collaborative. I haven’t figured out how to do that with writing just yet.

Canadian literature through lenses that address colonization wouldn’t be “Canadian” at all. So much of “Canadian” literature is rooted in the omission of Indigenous peoples or carries a focus on integration of racialized people without deep consideration of the ways what we call Canada is built upon the exploitation and exclusion of deviations from a white anglo norm. Not to sound too heavy (in an audio interview I would definitely laugh awkwardly at this point). Canadian literature with those lenses in mind would involve addressing the illegitimacy of the Canadian state and the impact that it has on our imaginations. On the way we dream about this land. On the way we imagine ourselves and each other. The illegitimacy of the Canadian state has a great deal of other impacts than tampering with our imaginations, no doubt about that. Literature should be a reflection of that.

That said, Small Beauty doesn’t have the overt consideration of colonization that some of my music has. This wasn’t an oversight so much as it was me not wanting to have a false handling of the topic. What I tried to incorporate into the novel was contrived.

Queer literature to me through these lenses is an incorporation of sexuality into that mix. In some ways it feels like a misnomer—what makes a book about queer or trans people of colour a “queer book” v. a book about race? Something that stood out to me while I was writing Small Beauty is the ways it’s already been talked about as a “trans” book, and yes, it is about trans people, but it’s also about race. It’s also about grief and eldering. I really wanted a book that centred trans women but did not focus on family reactions, [on] transition processes, [on] all of the things we can find in a documentary on Netflix. I wanted something that reflected the fact that when I’m my most comfortable I’m not constantly thinking about my gender or who I like to sleep with. Queer literature and trans literature feel useful to me as ways to identify books that deal with people with this thing in common with me, queerness, transness. I think about the writing of Reinaldo Arenas, and yes, so much of his work dealt with sexuality, but it also deeply explored state control, issues of class, and the ways people adapt to survive, but we remember him for being gay.

What writers do you admire? What books or authors influenced Small Beauty?

I love the work of Reinaldo Arenas, Octavia Butler, Leanne Simpson, Lee Maracle, Trish Salah, Wayson Choy, Morgan Page, Micheal Ondaatje, and Anne Carson. I feel like I’m constantly being introduced to writers that affect me. Small Beauty came from fragments of stories I’ve been rolling around with for years and as a result, it’s influenced by the writers and music I was spending [that] time with. I’m always coming back to books that I fell in love with when I was a teen, which isn’t always the most radical spread of work (this would also be a place for an awkward laugh). I’m also a bit of a theory nerd and I’m in university where I’m reading writing by Black [and] Indigenous academics and academics of Colour that are hugely influential on the ways on the ways I construct my view of the world. Which has a massive effect on my writing. I feel like my understandings of race and colonization are indebted to the work of Black academics like Patricia Hill Collins and Achille Mbembe and Indigenous academics like Leanne Simpson and Pam Palmater.

It’s been really nice. Ashley is an old friend of mine and working with them has been easy. I’ve never worked with editors this in depth before, and I’ve learned so much from the process and appreciate a great deal the learning it has brought and how it has improved my writing. It’s also been interesting to be working outside of the DIY kind of scenes that I’m used to. It’s a real shift from working on all aspects of a project, right down to the physical assembly. I love the shift in focus it brings. It makes it easier to just think about the writing and not worry about where I’m going to get it printed or what paper weight I’m going to use for the covers and when I’ll have time to screen-print them. I’m bunch older than I was when I was making solo recordings more regularly and it’s about time I learn how to play with other kids (also, definite awkward laugh).

What’s next for you, after this novel?

Another one, I hope. I’ve got a bunch of poems I’d like to do something with, and like I mentioned earlier Small Beauty was a coming together of some older pieces of writing. There’s a goose theme in the novel that I’ve been exorcising for almost a decade, if I’m being honest. Now that I’ve really written it out, all these other ideas are flowing in. There’s themes that are so deeply important how I understand my life that I don’t explore in the book in ways I want to, like what it means to be a racialized settler in Canada, or white supremacy in LGBTQ arenas.

Kathleen Fraser is a Montreal-based production editor and the managing editor of Plenitude.