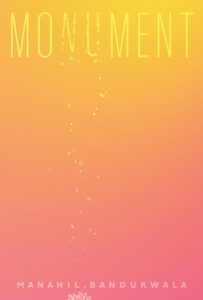 In her debut poetry collection Monument, Manahil Bandukwala immortalizes the historical Mumtaz Mahal, empress consort of the Mughal Empire, who is most often known as the woman for whose burial the Taj Mahal was built. Outside of this monument, the legacy of Mumtaz Mahal often goes unknown or unspoken about. Through this book, Bandukwala takes it upon herself to urge the reader to learn more about who Mumtaz Mahal was and to engage with the stories that the canon rarely prioritizes.

The title of the book, Monument, has been designed on the cover with such intentionality. The letters “N” and “U” appear to be crumbling, the title thus to be interpreted as Moment. This image of crumbling recurs throughout the book. Through a series of illustrations by Bandukwala herself, the reader sees an upside-down Taj Mahal slowly crumble as one reads further into the book, up until the final image where the building is just rubble. Bandukwala’s practice as a visual artist is apparent in this collection, as elements of visual play come to light. For example, in “Circle,” the poem is written in the shape of a tight spiral reading inwards, which one can interpret as mimicking the experience of gazing upwards at a dome in a masjid.

The second poem of the book, “Before, it was love” (after Danez Smith’s “Bare”), is a personal favourite. Consider the following lines: “If love is the summation / of religions, pray at the masjid, / the mandir, light a diya, and plunge / your face in rosewater.” This poem moves beyond Mumtaz Mahal, but sets the tone for interpreting her life and the loves she experienced throughout her time. Bandukwala looks beyond what is known of Mumtaz Mahal as the woman for whom the Taj Mahal was built, and explores the multiplicity one person may hold in a lifetime.

To write a book of poetry that explores the history of a person poses a particular challenge: to write the factual as more than just facts but as symbolic, as imaginative, as lyrical, and of course, as page turning. Bandukwala effortlessly writes to, as, and for Mumtaz Mahal, balancing the multitude of various perspectives with ease. Furthermore, Bandukwala incorporates into these poems informative snippets that shape how we are to understand the vast history of Mumtaz Mahal. Consider the following quote from “Rest”:“Rest now, Arjumand, in a place / to surpass a God’s house. (…) A place not built / by twenty-thousand labourers. A place/ that does not rest / on the back of an empire.” This conversational poem with Mumtaz Mahal as the subject still provides us details, while otherwise reading as a figment of Bandukwala’s imagination.

A similar pattern of intertwining the small moments of Mumtaz Mahal’s life can be seen in the lines of “Envision,” where Bandukwala writes, with regard to how Mumtaz Mahal’s life may have been lived had she not died when she had: “Thirty fewer hours / of labour-blood stayed in your body / instead of staining the desert sand.” The epigraph for “Envision” is a quote from Mohsin Hamid’s Moth Smoke, which reads, “I’m interested in things women do that aren’t spoken about.” The entire collection reads like a love letter to this epigraph.

In “Monsoon,” Bandukwala shifts between speaking to the reader and to Mumtaz Mahal. Bandukwala illustrates the setting when she writes, “For a few, brief days / there was no emperor, / no consort— / only two people / in love / under a monsoon.” She ends the poem, however, by speaking to Mumtaz Mahal when she says, “Come now / before / your husband / reduces your legacy / to marble. Time / to leave this place / where mosquito bites / redden skin / like the walls around.” The love with which Bandukwala writes to Mumtaz Mahal entices the reader to want to know more about Mumtaz Mahal, and is also what makes her such an easy figure to care for. It reads as a maternal warmth, which we can see Bandukwala direct towards Mumtaz Mahal in several poems throughout the book.

In the poem “Flow,” we may interpret an inspiration for the title from the epigraph, which is a quote from Robin Wall Kimmemmer’s Braiding Sweetgrass. The quote reads, “There is such tenderness in braiding the hair of someone you love. Kindness and something more flow between the braider and the braided, the two connected by the cord of the plait.” In this poem, Bandukwala, with such feminine camaraderie, writes, “The act / of braiding, woman to woman, of brushing the day / out of her hair, of her combing sleep and calm / dreams into yours.” In just this one line, Bandukwala illuminates the amount of care and tending to her own that Mumtaz Mahal held for those close to her, and that Bandukwala holds for Mumtaz Mahal, and us, as she writes this piece and the collection it is a part of.

Monument is exactly that: a monument to Mumtaz Mahal, and the creativity and Bandukwala’s imagination shows larger than the Taj Mahal itself. In “Burst,” the poem ends with the line, “As Mumtaz Mahal, / was there a single place you could not go.” This final line is a sentence, not a question. And it is through the efforts of those who do this work of immortalizing that there is no place, past or future, that she will not go. 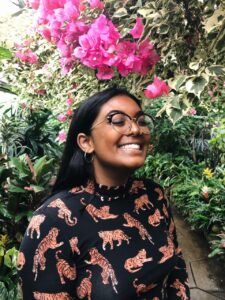 Namitha Rathinappillai (she/they) is a disabled, queer, Tamil-Canadian spoken word poet who has entered the poetry community in 2017. She is currently based in Toronto, and was the first female and youngest director of Ottawa’s Urban Legends Poetry Collective (ULPC). They are a two-time Canadian Festival of Spoken Word (CFSW) team member with ULPC, and they published their first chapbook titled Dirty Laundry with Battleaxe Press in November 2018. In 2019, they won the RBC Youth Ottawa Spirit of the Capital Award for Arts and Culture. You can find more at namitharathinappillai.com.