John Elizabeth Stintzi is a non-binary writer and visual artist who was raised on a cattle farm in northwestern Ontario. A selection of their work is featured or forthcoming in Black Warrior Review, The Malahat Review, Ploughshares, and in their poetry chapbook, The Machete Tourist. Stintzi’s writing has received support from the Canada Council for the Arts and The Watermill Center, and they recently won The Malahat Review’s 2019 Long Poem Prize.

The Writers’ Trust jury, composed of Jordan Abel, Sue Goyette, and Emma Healey, cited “Selections From Junebat” as “a compelling collision of content and form disrupting gender identity and reckoning with the liminal and silent space that such disruption instigates” (quote taken from the Writers’ Trust website). What does gender identity disruption mean to you? How do the multiple definitions in “Selections From Junebat” break it apart? 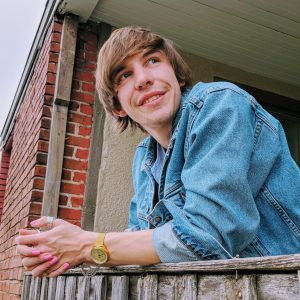 I would say that “gender identity disruption” is a good descriptor, but is one that is easier to tack onto someone else’s work, by which I mean I didn’t necessarily go into writing these poems thinking I needed to “disrupt” gender identity, except insofar as I needed to use the poems to make room for my own (which of course involved disruption). The multiple definitions in the poems—of the Junebat, and of gender particularly—are the ways in which I try and make sense of myself, and emblematic of how non-linear and inconclusive the “making sense of yourself” process can be. By having multiple definitions, I undercut the myth that there is always an end to the investigation of the self.

You undo these same definitions of a “Junebat” throughout the poem, negating what it is with what it isn’t. What implications does the word Junebat have for gender identity?

The undoing, negating, and contradicting is an important aspect of creating the space for the queer, ever-questioning identity I wanted to embody. I don’t actually think of a Junebat as an exclusively gendered—or gender-related—thing. It is many different things mashed together—gender, sexuality, mental health, etc. In other words, they’re much like a person, with many things going on that relate and don’t relate to each other, but still comprise a whole.

Obviously, gender identity is what I’ve had my feathers most rustled by, and is what I’m talking about a lot of the time I mention a Junebat in this project. Gender identity is also what many people—I’m sure—define me by, but I do want to get ahead of the idea that the Junebat is in any ways two-dimensional (dare I say that I do not want the Junebat to be tokenized?). A Junebat is a feeling, an action, the presence or lack of an identity, and they’re also the weird creature that flutters in the dark of your room that—sometimes—you’re the only one that sees. They’re either all of these things, or they are none of them, and the only thing that the Junebat is not is one simple thing.

What does the intersection of non-binary and gay identities mean to you, especially in the lines “Dissociation during sex is recommended. / Or maybe you are gay. Gayness is real / now. Experiment.”?

That line, from “Evidence Disproving the Existence of Junebat,” refers to a gut response from when I was beginning the intense and active questioning phase where this project begins. I described that poem during my Bronwen Wallace reading as “a poem about the bad voice in my head.” My therapist, also, recommended that I explore my queer sexuality at the time, since she believed it might help me better imagine who I am and where I feel most comfortable. Which was well-meaning advice—and a good idea in an ideal world—though it was a very bad idea for me. I look back now and laugh at the idea that I thought that because I felt weird about being seen as a man, maybe it was my sexuality that required inspection. I guess it was the easier answer to swallow. The only intersection I see between gender and sexuality now is that I feel very strongly it is patently absurd to base or involve someone’s body in your attraction to them, though my preference for choosing a human to love has also always prioritized romance over sex.

Dipping my toes into the world of flirting with/messaging gay men did nothing but cause me to become very dysphoric, honestly. There is something very aggressive (but the better word might be “visible”) about the way many cis-gay men flirt and sexualize those they are interested in, which is oftentimes very male-coded. As someone who does not often identify as a man very often, that was a very difficult gaze to expose myself to. I would go so far as to say it would be impossible for me to explore my sexuality with someone who I feel is viewing me very sharply through a lens where I cannot see myself. Who is attracted to the aspects of the body that make me feel most like a stranger in it.

Your work as a non-binary artist strikes another important step in Canadian literature, diverging from canonical poetry and continuing to establish a new era vis-à-vis gender fluidity and nonconformity in contemporary writing. Are there other writers whose work inspires you to write about gender, or who are also contributing to the discussion on gender nonconformity?

I would argue that my work is in no way an important step but a speck (to allude to Casey Plett’s Lambda Award acceptance speech) on the panorama of the at-times-problematic escalator that is carrying the beautiful trans artists somewhat closer to the fore in Canadian letters. I am very, very far behind in the line of people who have been making this possible in (or for) Canada. Nearer the front I would place writers like Ivan E. Coyote, Trish Salah, Casey Plett, Gwen Benaway, Ali Blythe, Stevie Howell, andrea bennett, and Kai Cheng Thom. Some who stand a little nearer to me are probably A. Light Zachary, Joshua Whitehead, and jaye simpson. I could go on—and there are many I have not yet read, or am not recalling at the moment—but my point is: I hesitate to be called important when there are all these people who have been doing this much more visibly than I have for a lot longer, and in a literary (and real) world offering them no opportunities or privileges like the ones I may be offered. They have written with much greater risk and with much less hope for recognition by entities like the Writers’ Trust of Canada, often working with nothing except the recognition of making trans people feel less alone (frankly the only recognition that matters). I know culture loves to claim that the recent spike in visibility means the wave of people fresher to the scene are responsible for it, but that’s really not true. I’ve had it easier than every single person I’ve named here—particularly as a white writer, with a supportive family, who is 99% of the time misperceived as a cisgendered man (and 20% of the time at peace with that)—and I hope the slowly increasing visibility that trans and non-binary writers are getting does not bring them harm.

I will say on a purely non-binary trans level, that writers like A. Light Zachary and Ivan E. Coyote were huge for me, because they opened up my mind to “they” and the more murky, indefinable places where I have found the most joy in my body. I am proud to follow after many great non-binary writers to help make some space for the non-binary murkiness of the future. I would say that A. Light Zachary has been especially important, personally, because they have become a dear friend and an excellent source of affirmation and writerly advice. Outside of all these names, a few American writers who come to mind, and who have been important in my gender-imagination (early on and lately) have been Torrey Peters, Emrys Donaldson, and T Fleischmann.

Can you talk about “Selections From Junebat” as a larger body of work? What will it be (or won’t be)?

These poems are a part of my first full-length poetry collection—Junebat—which narratively revolves around the year following my move to Jersey City, New Jersey, and where I, in isolation (though “exile” might be a better word), had space and time to question and explore who I was in a way I’d never done before. A large part of the book are explicitly “Junebat” poems—which include the three that won the award—but the latter half also follows my falling in love with my partner. That felt like the beginning of a new life, in many ways, because I had figured out enough about myself to be honest with her from the start, so there wasn’t this itching question at the back of my mind. Instead, the itching question was at the front of my mind, fluttering around, and we both knew that it was there and could be tender and playful with it.

So the book is—I hope—as much about love as it is about struggling with mental health issues and the oftentimes difficult task of trying to make a home for yourself in your skin—an experience many cis people also go through. I can only hope that the ease with which I’m privileged and lucky to bring my work to the world helps it reach people, both Junebat and not, and can only dream that it will help people feel less alone—like the work of the writers listed above have done for me—and help others realize the beauty—and humanity—of the unstable, fluid identity. Gender or otherwise.