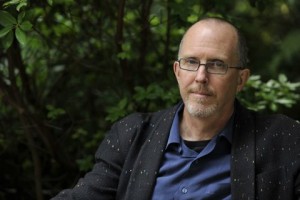 “I came upon Ian Young’s Year of the Quiet Sun in the mid-seventies, either on the bottom shelf of the poetry section in a Calgary bookstore or, worse, in the remainder bin. I’m not sure if I realized then that it explored themes of love between men but, decades later, research revealed it to be the first openly gay book of poetry published in Canada by a mainstream press. To echo its title, this is a quiet landmark. With the careful artlessness of Cavafy and like the pillow books of oriental poetry, all floating on an unselfconscious stream of calm, these poems of a young man about the young men he loves arrest me still with a simplicity poets often give up as their vocation matures: “When the boy undressed / I saw on his left shoulder / a blue tattoo— / …Later, I half expected it / to peel off / in my mouth.” I don’t know where you’ll find this book, but Ian Young is one of our forefathers.”

John Barton’s eleven poetry collections and six chapbooks include Hymn (2009), For the Boy with the Eyes of the Virgin: Selected Poems (2012), Balletomane: The Program Notes of Lincoln Kirstein (2012) and Polari (2014). Co-editor of Seminal: The Anthology of Canada’s Gay-Male Poets (2007), he also edits The Malahat Review.

Read the interview with John Barton on style, sensibility and the evolution of For the Boy with the Eyes of the Virgin.