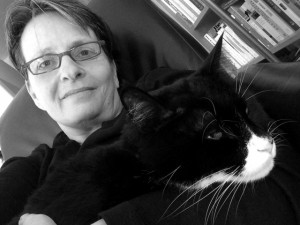 “I am a dyke, a visual artist, a writer who longs for the sentences I read to be painted instead of typed. Can I tell you how excited I was when a friend recommended the beautifully composed The Last Nude, by Ellis Avery? This is a novel about the nature of art and of loving a genius. The Last Nude is a novel about the broody artistic demi-monde of late ’20s Paris. In the Bois de Boulogne, aristocratic Art Deco artist Tamara de Lempicka picks up a down and out young American, Rafaela Fano; Rafaela becomes de Lempicka’s model and lover, inspiring the artist’s most famous five-piece series, Rafaela.

“Until close to the end of the book, Avery imagines the relationship from Rafaela’s perspective. As Rafaela unfolds herself for voracious Tamara, so she unfolds herself for herself. The up-welling of their union is luxurious and sexy, but just as Paris moves towards collapse — and here Avery introduces us to the other artistic denizens of Paris, like Jean Cocteau, James Joyce, and Sylvia Beach — we know that inevitably so will the women’s romance.

“But with Avery’s stunning prose to carry us, it is gratifying getting there.

“After I read The Last Nude, I stood outside Tamara de Lempicka’s Paris apartment, imagining de Lempicka at the window pulling back the draperies while Rafaela slipped in through her doorway.

“I asked Ellis Avery what she’s up to now: ‘I’m currently working on the kind of books that, when I was a young reader, made life worth living. One of them is a retelling of the Fukushima disaster, except with a dragon in place of a nuclear reactor. The other is — in part — about how cats came up with their own internet before we did.'”

Jane Eaton Hamilton is the author of eight books, including Love Will Burst into a Thousand Shapes, poetry. She has twice won first prize in the CBC Literary Awards for short fiction. Her work has appeared in such places as the New York Times, Salon, VIDA, Maclean’s, and En Route. She’s writing two novels.