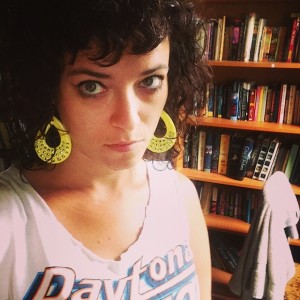 “I hope it goes without saying that there are so many books and writers and mentors that it’s near impossible to pick a favourite as that, a favourite. As someone who reads and writes poetry, there are not only books and authors that come to mind, but also poems, stretches of words picked up at readings and remembered, and individual lines that might not have been meant as poems but struck me as being exactly that.

“There are the books that have changed how I read and how I write, the ones that have informed my identity, my sexuality and my politics. For The Query Project, I want to introduce people to, or remind people of, Chandra Mayor’s Cherry. Cherry is a short novel set in Winnipeg’s punk, street and skinhead scenes of the early 1990s. It was published in 2004 by much-loved Montreal indie, Conundrum Press.

“For people who know my writing, it won’t be a surprise that I love this book that is often non-linear, that skips some bits and repeats others. It’s a document on alternative culture as much as it is a testimony to the regular-ness of horrible things happening to girls.
Mayor is a poet, and while I’m not sure if she identifies first as a poet or a novelist, her poetic sensibility is all over the pages of her prose. She manages to capture a moment perfectly, to pay homage to the underbelly of a city that’s not even the underbelly that comes up in other literature about the area. She weaves readers through hits of acid and crying babies and basement food banks and angry impossible fights, managing to capture how a young woman living in it might romanticize it, and to show it for all of its ugliness. She plays with structure and tense, and ultimately achieves presenting the traumatic as the mundane, without making her work or story or characters unrelatable, or that, mundane.
“On a personal level, it’s important for me to have reference points for poets writing prose, for differently structured work, and for the ways alternative culture finds its way to the page.”

Tara-Michelle Ziniuk is a Montreal-born, Toronto-based writer and editor. She’s the author of Emergency Contact and Somewhere To Run From, and has collaborated with illustrator Sarah Mangle on a zine called Our Date With Alison Bechdel. Current writing projects include a third poetry collection and a novel. She lives with her daughter.