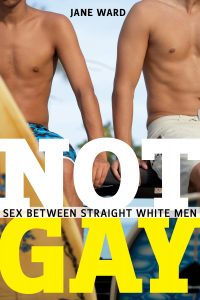 In her new book Not Gay: Sex Between Straight White Men, Jane Ward makes a compelling and fascinating argument about the significance and role of sex between straight white men as a requisite ingredient that solidifies their masculinity, their sense of manhood, and most significantly, their heterosexuality.

In her introductory chapter titled “Nowhere without It: The Homosexual Ingredient in the Making of Straight White Men,” Ward argues that sexual intimacy between straight white men, whether in locker rooms, fraternity hazing rituals, biker gangs, backroom bars, military and navy subcultures, or elsewhere, serves as a constituent in the making of straight, white masculinity. Ward argues that instead of treating these incredibly prevalent incidences as anomalies or evidence of “boys being boys,” we should pay attention to the importance of gay sex in the lives of straight men precisely because of their own disavowals of its importance.

Ward notes that “white straight-identified men manufacture opportunities for sexual contact with other men in a remarkably wide range of settings,” and that “these activities appear to thrive in hyper-heterosexual environments, such as universities, where access to sex with women is anything but constrained.” She writes,

For straight men, calling homosexual sex by many other names—an “experiment,” “male bonding,” a “game,” a “joke,” a “performance,” an “accident,” a “hazing ritual,” “dominance,” “aggression,” “boys will be boys,” “desperation,” “deprivation,” “toughening each other up,” and so on—is the very way that homosexual becomes possible, by which I mean, that it becomes heterosexual.

Earlier researchers have tended to dismiss or undermine the ritualized importance of these activities as simply boys letting off steam, or “boys being boys.” For Ward, “all too often a ‘boys will be boys’ analysis of straight men’s homosexual activity functions more to obscure rather than to illuminate the implications” of sex between them. Her book is an attempt to give far greater attention to “the ways that the construction of heterosexuality so thoroughly allows for, and in fact requires, a remarkable amount of homosexual contact.”

Ward takes us through a wide array of heterosexual subcultures in which gay sex seems to be a prerequisite to confirming one’s heterosexuality and establishing the solidity of one’s heterosexual masculinity. She spends some time on the hazing rituals of white fraternities (as well as the porn studios that re-create fraternity hazing rituals like Hazehim.com), as well as biker gangs, military subcultures, and dating advertisements from self-identified straight white men. In each case, she finds that straight white men more often than not manufacture contexts in which homosexual intimacy becomes “necessary” and important to their own understanding of themselves as straight white men.

Refreshingly, Ward is not interested in interrogating these men’s self-proclamations of their heterosexuality: she argues that “the nearly obsessive focus on whether individual people are born gay or straight functions as a bizarre distraction from the greater cultural significance of homosexuality, both historically and at present.” Instead, Ward is arguing that “homosexual sex plays a remarkably central role in the institutions and rituals that produce heterosexual subjectivity.” 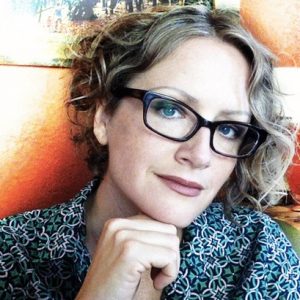 n recent queer and gender theory. While the instances Ward takes us through add up to a compelling and important facet of heterosexual men that remains under-examined, her theoretical framework is a little too pat in unifying the meaning of these varied instances and contexts.

What I appreciated most about this book was Ward’s attention to race in how sex and sexuality are understood and constructed. Ward is particularly interested in the homosexual sex practices of straight white men because, she argues, “whiteness continues to function as a stand-in for normal sexuality” even as straight white men’s sexual practices continue to remain “truly invisible and unmarked.” She notes, for instance, that the “last two decades have been marked by a media-fueled panic about the sexual fluidity of men of color, particularly Black men,” to the point where Black men on the down-low are stigmatized as being solely responsible for the increasing rise in rates of HIV transmission among heterosexual women of color (as Ward notes, the US Centers for Disease Control has publicly acknowledged that “there are no data to confirm or refute publicized accounts of HIV risk behavior associated with men of color”). She notes that white men’s sexual practices are “rarely, if ever, racialized, or attributed to particular ethnoracial sexual norms within white culture. Blacks, Latinos, Muslims, and other non-white and non-christian ‘cultures’ become the repository for cultural difference, sexual repression, homophobia, and hyper-religiosity, thereby masking the normative white Christian secularism that fuels white male homophobia.” White men, unlike men of colour, can “leverage white masculinity to assist in the context of sex with men.”

Ward’s study, in attempting to make visible the unmarked practices of straight white men, is an excellent example of racializing whiteness in order to unmask and undo its own delusions.