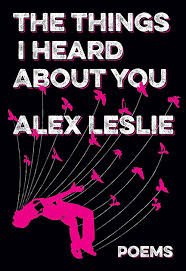 slie’s The Things I Heard about You is an experiment in language, editing, and meaning. The book of poems is divided into thirteen sections. Each section begins with a prose piece that Leslie edits down into a single phrase and in one case, just one word: “Thumbprint.” Between edited versions is the word smaller. Smaller runs through the book like a mantra of determination: smaller, smaller, smaller; each piece must be the smallest it can be! Like a period at the end of a sentence, the word smaller neatly wraps up the longer prose pieces, which often have an out-of-control, stream-of-consciousness type of style.

The names of the different pieces are like one-line poems in and of themselves: “Debris for Children,” “How Doves Saved a Lover from Fire,” “Pacific Phone Book.” Each piece begins with a single black and white line drawing underneath the title. For example, “Debris for Children” shows an empty children’s desk and “Pacific Phone Book” shows an empty phone booth. Like the smallest, edited-down version of each piece, the images are simple and straightforward, capturing the raw essence of the poem.

Leslie’s editing process is strictly a cutting away. There are no new words, images, or ideas in her final pieces that do not first appear in the earlier prose pieces. In the acknowledgement, Leslie explains that the book was inspired by lines in John Thompson’s Stilt Jack including “I know how small a poem can be.” The Things I Heard about You asks how small can a poem really be? What is necessary? Can the essence of a poem be captured in just a few words? Leslie shows that yes, absolutely, this can be done. A great example is “Alert Bay to Port McNeill,” which begins with a weighty portrayal of people in a vehicle on a ferry. Nothing escapes description: the entrance to the ferry, the arms of the passengers, the other vehicles, the light, the “whole ferry dragging its roiling belly forward just for our one car, carried from one island to another, the staff watching us hurl our bodies.” By the end, the wordy descriptions have been condensed into one beautiful phrase: “We the only. Flute, you, arms out, white loops for our ocean.”

Still, I sometimes found myself wanting the pieces to be longer, not smaller. After all, editing doesn’t just mean cutting away, and some subjects need more words to do them justice. Such was the case with “Builder,” about a person who has been building structures along the riverside. I found myself wanting to know more about this person arranging “night sticks and a tourniquet made of bound grass, flaxen knee-shafts.” Why were they building these structures? Why was there “another dog [that] disappeared last night” and what did it have to do with the builder? The whittling away of this particular poem left me unsatisfied, with more questions than answers.

I wondered, though, if the job of a poem can be to ask the reader to imagine more, to plant seeds that will later blossom into creative expressions, be they meaningful conversations, new ideas, or even new poetry and writing. The forager in “Dump Stories” is similar to an inspired reader and/or Leslie herself, making something new out of the excess. But instead of searching through superfluous descriptions for a few words that will express all that a poem needs to be, the forager sifts through dumpsters for useful pieces of trash. Instead of poems, the forager makes new creations like “bathtubs of coloured glass” out of broken bottles. Is it a coincidence that the description of the forager—“dumpster diver, scrounger, hoarder, fairy-tale monster”—can also be an imaginative way of describing a writer foraging through media for ideas, hoarding the necessary, and bringing to light the monsters?

The Things I Heard about You is a thought-provoking exploration of the editing process, from the heavy first draft hoarding unnecessary words, whittling all the way down to its essence. Alex Leslie gets us to look at what a poem is and everything—all the words, images, and descriptions—that it isn’t.

Malaika is a writer, copy editor, and spoken word performer. She has written for Autostraddle.com, The Feminist Press, The Media Co-op, and The Sierra Club.