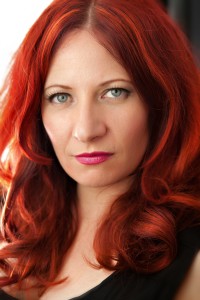 Writer, filmmaker, and performance artist Amber Dawn has released a new collection of poems this year, titled Where the Words End and My Body Begins. Her previous works, Sub Rosa and How Poetry Saved My Life: A Hustler’s Memoir, have garnered wide acclaim and awards—the Lambda Literary Award and a Vancouver Book Award, respectively. In April, Amber Dawn is embarking on a west coast book tour—the Where the Mountains End Tour with writers Vivek Shraya and Leah Horlick. I caught up with Amber to ask her about her new collection, what queer writers she’s reading, and what writers inspired her to start writing.

Your new collection of poetry, Where the Words End and My Body Begins, is a stunning collection of glosas—a form poem that has a writer take four lines written by another poet to create a new poem. What attracted you to this form?

My ongoing goal is to lower that fourth wall and actually have a dialogue with other writers and readers. The glosa has brought me closer to the dialogue I seek. It’s a call and response form. In Where the Words End and My Body Begins I heard the call of nineteen poets, and I responded in glosa poems.

The collection uses lines from Gertrude Stein, Christina Rossetti, and Leah Horlick as jumping-off points to create new poems. What do you admire about their writing? What drew you to their work?

About two years ago, I began exchanging emails with Leah Lakshmi Piepzna-Samarasinha. We’ve blurbed one another’s books. We’ve championed one another’s writing (and experiences and dignity). She wrote a poem called “I Love Hard Girls”—which includes a line that riffs off a line in my memoir—first published in PRISM International 52:2 in 2014. I then glossed “I Love Hard Girls” and came up with “The Revered Femme Bottom.” A month later she wrote me with a glosa she called “Good Girl Glosa.” I never knew how desperate I was for a poetry pen pal until Leah wrote to me. I started glossing other poets. It started with friends like Jane Eaton Hamilton or Lydia Kwa—poets who I could never quite verbalize how much their work means to me. Then I looked to forebear queer and lesbian poets like Lucille Clifton or Gertrude Stein. I admire different things about each of these poets—different aspects of their craft and also different ways in which they exist(ed) in the world. What I find unites the poets I glossed is that they are all champions of change, healing, and social justice in unique ways.

One of the standout poems for me, personally, is “Three Portraits of Femme Queers, Ousted,” which borrows lines from poet Jillian Christmas. It reminded me a little of Stein’s Three Lives. Did you have her in mind when you wrote it?

Ah, Three Lives! No, I’m sad to say I wasn’t thinking of Three Lives! I was thinking of the Three Graces. Being Italian-Canadian, I’ve grown up with images of the Three Graces, from Botticelli to ancient fresco paintings in Pompeii. Together these three women represent beauty, creativity, and fertility; the latter I adapt to mean unabashed, empowered sexuality. So I thought about which three women really represent the Three Graces, in a contemporary, local Vancouver sense. I came up with activist Jamie Lee Hamilton, community leader Trish Kelly, and poet Jillian Christmas.

When did you decide you wanted to be a writer?

Like I had a choice? It was not a decision. Write or die is my credo.

Were there any other titles for your new book you were considering? 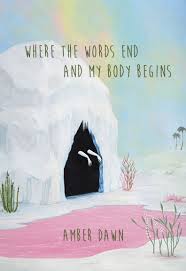 Yes, originally the working title was “Queer Infinity,” as the book is so much about the cyclical nature of queer and survivor identity and communities. Then Brian Lam at Arsenal Pulp Press asked me if I wanted to consider a more personal title, a title that specifically spoke to my personal process of writing the book. Where the Words End and My Body Begins was inspired by Lam’s prompting (he often inspired me this way). This title says more about how I literally felt I was embodying the glosa form, how the form became a genuine, almost physical, way to express myself.

What queer writers are you currently reading?

I’m reading Alex Butler’s Rough Paradise, which reads like one continuous, remarkably gritty and hopeful monologue. I’m reading Sybil Lamb’s stream-of-brazen-consciousness novel I’ve Got a Time Bomb. Going to name Dia Felix’s whirlwind poetic prose novel Nochita too. I’m reading queer books that are light years away from the popular three-act structure. Through these and other authors, I’m learning a lot about how many ways we can tell a story.

You are embarking on a fantastic book tour—the Where the Mountain Ends Tour—with writers Leah Horlick and Vivek Shraya. What do you like about life on the road? Is it something you enjoy?

Writers should do both what we love and what we fear. I both love and fear getting on stage every night, making myself vulnerable, connecting with audiences, etc. Vivek and Leah are very good on stage. They literally breathe life into their written work. So I’m sure I’ll also love and fear (intimidation kind of fear) performing alongside them. I’m ready for the challenge. I’m even more ready to drive south and warm up a little. San Francisco, I’m headed your way.

It seems to me that every day a new collection of fiction, poetry, or non-fiction by a queer writer is burning up on the internet. Is it just me or are queer writers dominating the literary scene lately?

I think it’s just you, Matthew. And I think it’s us. Queer lit readers and writers can find each other more easily now. I utterly lament the growing loss of queer bookstores. But I am grateful that social media and online magazines allow us to get our hands on queer content, to share a wide range of queer voices and aesthetics and values so readily.

What writers inspired you to start writing?

Kate Braid. Not only was she one of the first poets I ever read, she became my mentor. I can’t thank her enough. Also, in Vancouver, when I was a baby dyke in the early ’90s, there was Press Gang Publishers—a small, feminist press that published Shani Mootoo, Rita Wong, Daphne Marlatt, Lee Maracle, Sky Lee, Persimmon Blackbridge, Lizard Jones, Sheila Gilhooly, Larissa Lai, etc. Press Gang authors became my rock stars, my celebrities. I wanted to adore them, hook up with them, be them. I may have half a dozen embarrassing stories about fan crushing on these authors at Press Gang readings. Press Gang is definitely my root!

Matthew Walsh’s work has been featured in Arc, the Found Poetry Review, Carousel, Descant, Existere, Matrix, Carte Blanche, and the Steel Chisel and as part of the Halifax Commons poetry anthology. His long poem “Cloud Grape” won the York University President’s Prize for poetry. He is also the recipient of the 2014 John Newlove Award for poetry.