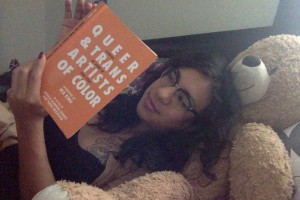 We live in a world where resources, including those intended for the queer community, are overwhelmingly in the hands of upper-class white men. Queer and trans people of colour are forced to contend not only with the regime of heteronormativity that all queerness exists in contrast to, but with forms of economic and political violence specific to their nonwhite identities.

Few oppressive forces are as crushing as isolation, and many queer and trans people of colour experience this in part via erasure: the received impression that their lives are anomalous, unimportant, or even nonexistent. Erasure is, for example, the experience a person of colour might have Google Image–searching the word “artist” and seeing page after page of white faces.

This brutal denial of existence—the exclusion from available media of positive possibilities for oneself—is both addressed and partially redressed by Nia King’s self-published book Queer and Trans Artists of Color: Stories of Some of Our Lives, an engaging and accessible compilation of Ms. King’s interviews with queer and trans artists, writers, and performers of colour.

A brief foreword by writer Toi Scott discusses their first encounter with the acronym for queer and trans people of colour, QTPOC (“‘QT’ like ‘cutie’ and ‘POC’ as in Tupac”), and briefly contextualizes the struggles of marginalized people against invisibility, assimilation, and erasure in the wake of “the cultural theft that took place during colonization and slavery.”

Though many of the interviewees live and work in or near San Francisco, California, this book doesn’t assume familiarity with that region’s scene or its formulations of identity, and it includes explanations of terms that may be new to readers, like “cisgender” and the use of non-binary pronouns.

Each interview opens immediately with the artist’s own voice, instead of an introduction or capsule bio. This means readers get to know each interviewee organically and incrementally, as a person, discovering things about them as we go. It’s a small but crucial choice that keeps the voices of the interviewees in the forefront, although there is a section of bios in the back of the book for reference. 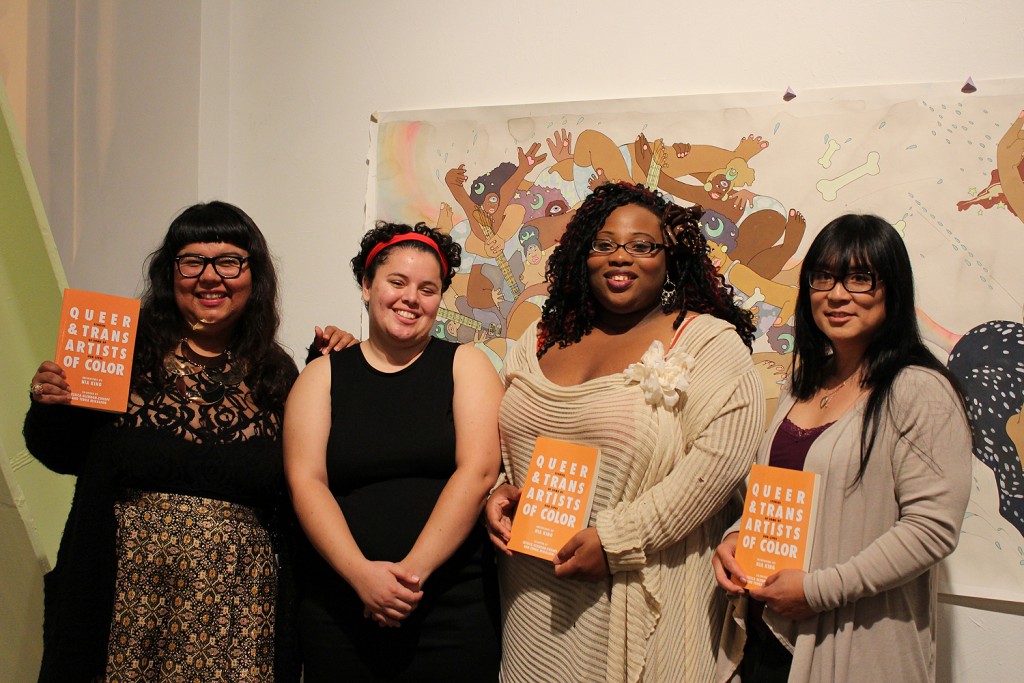 Because this is an accumulation of people telling their own stories from their own backgrounds—differing ethnically, economically, and even continentally—Stories of Some of Our Lives addresses race and queer identity via first-hand lived experiences. Certain subjects recur: the problems and possibilities of formal education, the struggle to survive economically, and disparities between one’s politics and one’s relatives. Mexican-born poet and activist Yosimar Reyes, among the collection’s stand-out interviews, says of many “intellectual queers,” “we like to theorize and shit, but we don’t even know how to have conversations with our families about the things that we feel. If you can’t explain your theory to your grandma, then how useful is it, really?”

Artist as a label is a public persona, so as with gender identity, there is always a tension between how you feel and how you seem or are perceived, territory each interviewee is navigating their own way. Because of this overlap, Stories of Some of Our Lives holds significant value even for readers who neither are nor aspire to be artists.

Unlikely as it might seem, this is a book focused on selfhood that’s almost entirely free of self-indulgence. Ms. King draws her subjects out, prompting thoughtful and candid discussions of “call-out culture,” the pitfalls of the non-profit industrial complex, and the upsides and downsides of retail—many of the interviewees are working-class queers. Stand-up comedian and educator Dr. Micia Mosely lays out an invaluable analysis of the disconnect between younger queers and those over thirty: “I feel like technology has interrupted our ability to actually have substantive intergenerational conversations.” 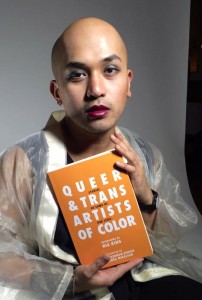 Some of the interviewees will charm you and some you may find less sympathetic; their priorities may differ from yours. That’s what makes this collection diverse rather than tokenizing.

Ms. King herself is not prominent in these interviews. She is there as a facilitator, encouraging her subjects and drawing them out. Appropriately, the book concludes with Ms. King being interviewed by the book’s editors; she is a QTPOC artist, after all. “I try to ask about experiences that shape people and make them who they are,” Ms. King says, “beyond just their identities as marginalized people.”

The first steps towards building power against oppression can be as simple—and yet radical—as speaking to and listening to each other about our lives and experiences. The artists in this book, each aspiring to both create meaningful work and build a life in line with their identity and values, provide multiple models for these crucial and deeply personal processes. The interviewees also give provocative angles and avenues of insight into sticky issues like geographical isolation, depression, shyness, and the social positioning of “cute” queers or trans folks who pass as binary.

Stories of Some of Our Lives could be described as a collection of narratives positioned as critique of and antidote to tendencies within the dominant narrative, but that kind of abstract language obscures what a pleasure this book is to read and how much fun the interviews are. Stories of Some of Our Lives offers a refreshing breadth of representation, amplifying voices that will resonate not only with QTPOC readers, but with anyone who isn’t hearing enough QTPOC voices in the conversation on queerness—which is to say, everyone.

Jules Bentley is a New Orleans writer and the author of the novel Fuck or Swim.